How will Canada's national public alert system work? An explainer

A giant fireball is seen as a wild fire rips through the forest 16 km south of Fort McMurray, Alberta on highway 63 on May 7, 2016. Canadians seeking updates on public emergencies will soon have to look no further than their mobile phones.
The Canadian Press
Apr 2, 2018 5:16 PM 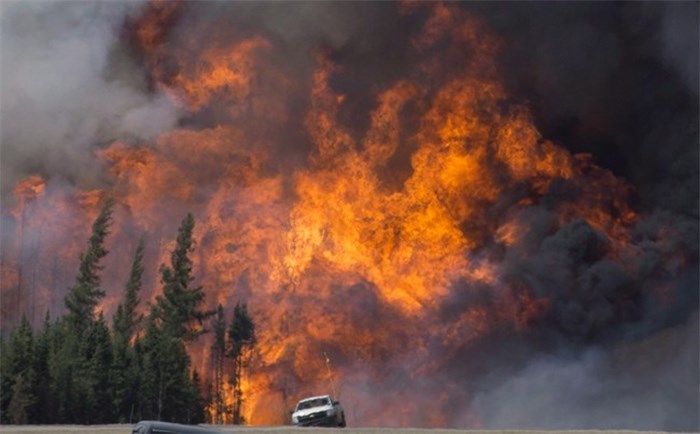 A giant fireball is seen as a wild fire rips through the forest 16 km south of Fort McMurray, Alberta on highway 63 on May 7, 2016. Canadians seeking updates on public emergencies will soon have to look no further than their mobile phones. THE CANADIAN PRESS/Jonathan Hayward

Canadians seeking updates on public emergencies will soon have to look no further than their mobile phones.

Later this week, telecom providers will become part of the National Public Alerting System and will push emergency notifications out to users on their networks. Here's a look at how the system is expected to work:

The National Public Alerting System, often dubbed Alert Ready, is a service designed to deliver emergency notifications to Canadians. In the past the system has shared those messages over radio and television networks, but wireless networks will be included as of Friday. Customers with Canada's major telecom providers have likely received text messages about the service in the past week or two, as the Canadian Radio-television and Telecommunications Commission (CRTC) has mandated that providers send at least one explanatory text a year for the next two years.

How does it work?

When an emergency situation develops, a government issuer (for example, a provincial or territorial emergency management agency, or Environment and Climate Change Canada) will deliver an alert to the National Alert Aggregation and Dissemination (NAAD) System, which is run by Weather Network parent company Pelmerex Corp. The system will then push the alert to broadcasters and wireless companies. According to the Alert Ready website, found at alertready.ca, wireless service providers will only relay messages issued for threat-to-life situations. The Alert Ready website says no data will be gathered about individuals, their wireless devices or their locations when emergency alerts are sent out.

What does this mean?

In case of emergencies, officials will be able to send a localized alert that will compel compatible phones on an LTE network to emit an alarm and display a bilingual text warning of exactly what is unfolding. The shrill, siren-like alarm tone is the same one that currently accompanies alerts broadcast via radio and television. The Alert Ready website says individuals will not be billed for messages they receive.

What situations could prompt an alert, and are there any geographical boundaries in play?

The Alert Ready website says alerts sent to wireless devices will be "geo-targeted," meaning alerts will only be sent out to people likely to be impacted by the emergency event. The website offers a comprehensive list of the types of scenarios that could trigger an emergency notification. The broad categories are: fire (such as widespread industrial blazes or forest fires), natural (including earthquakes and severe weather), biological (such as major air or water contamination), terrorist threat, or civil emergency (such as a danger posed by an animal or an Amber Alert for a missing child). Alerts may also be issued if there's a disruption or outage for 911 services.

Can I opt out?

No. The CRTC has previously stated that the alerts are too important to be optional, overriding preferences from telecom providers that pushed for an opt-out clause. However people dreading the sound of the alarm at odd hours have some choices. If a smartphone is turned off it cannot be forced on by an alert. Similarly, if a smartphone is muted an alert cannot force the device to play the alarm.

So does this mean I'll start getting alerts on my phone as of Friday?

While a broad range of popular phones are compatible with the program, wireless providers have released different lists of phones that will receive the alerts on their networks. Consumers can look up their phone type and more information on the program at alertready.ca.

Will I get to see the system in action on my phone?

Yes. The CRTC has said that wireless carriers will conduct one test of the system during the week of May 6. Details have not yet been released.