A North Vancouver businessman who was ticketed for improper disposal of brake sealant is accusing the municipality of unfairly targeting him.
Jeremy Shepherd Sep 7, 2019 10:36 AM

A North Vancouver businessman who was ticketed for improper disposal of brake sealant is accusing the municipality of unfairly targeting him.

The District of North Vancouver recently issued a $190 fine to Noorez Devraj, the owner of Lyna Manufacturing on West 15th Street. The business is located in a light industrial area near Pemberton Avenue, about 200 metres from Mackay Creek. 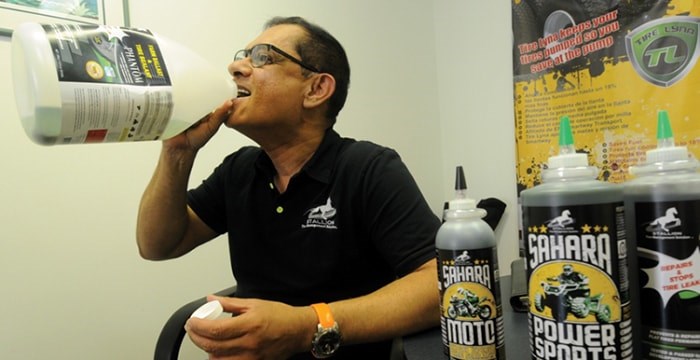 Entrepreneur Noorez Devraj says he was unfairly targeted by the District of North Vancouver after being fined for dumping diluted tire sealant in a back alley drain. In a bid to prove his sealant is non-toxic, Devraj recently helped himself to a drink. photo Mike Wakefield, North Shore News

Devraj doesn’t dispute that he rinsed out drums of tire sealant in the alley behind his business. However, he argued there was no risk of environmental catastrophe.

The Stallion brand tire sealant is classified as non-hazardous, non-flammable and water-soluble, according to the product’s material safety data sheet.

To prove his point, Devraj tipped a bottle of watered-down sealant toward his mouth, took a swig and swallowed.

Devraj said the conflict began when an employee at a neighbouring business accused him of dumping toxic waste in the drain.

The product’s greenish tint is provided by food dye, according to Devraj. He said his sealant also contains glycerin, which is frequently used as a sweetener in foods.

The district bylaw specifies that only rainwater or clear water waste can be discharged into the storm sewer system.

In appealing the fine, Devraj produced video of suds and black grit flowing to and surrounding the back alley drain – contaminants he attributed to neighbouring businesses.

Washing cars and dumping liquid cleaning products into the drain is a “common practice” in the laneway, he said.

“You just can’t come and single out one business and let everybody alone,” he said. “I think I’ve been targeted, singled out, and it’s not fair.”

Devraj, who has operated in the district for 23 years, said the municipality should do a better job of ensuring a level playing field.

“If I can’t use that drain, then nobody should be allowed to use the drain,” he said.

“As this has already been resolved by an independent adjudicator, we won’t be providing further comment,” she stated in an email.

Devraj’s fine was boosted from $190 to $275 after his unsuccessful attempt to dispute the ticket.