This photograph from Urban Salmon, a coffee table book which documents salmonids around various Metro Vancouver watersheds, shows coho salmon in the Capilano River. The book’s author and photographer, Fernando Lessa, is giving a presentation on salmonids and urban environments in North Vancouver next month. Photo: Fernando Lessa/Urban Salmon

Among all the cars and concrete, there was … salmon?

Fernando Lessa had the same thought when he moved here from Brazil a few years ago. Even with Metro Vancouver’s bright lights and big sounds conjuring an atmosphere of endless hustle and bustle, he was surprised and delighted to learn that fish such as steelhead trout and coho salmon were still migrating through the surrounding streams and rivers and creeks.

“That’s really important because I don’t know anywhere else in the world that you get that,” says Lessa, who moved to North Vancouver in 2016. “I think around us is the only place where you can get the city and the fish so close.”

A photographer and storyteller by trade, Lessa got out his camera immediately. He had learned that Burnaby had many great spots for the ecologically curious to watch salmon returning to spawn, but as a newly-minted North Shore resident he was just as excited to take in North and West Vancouver’s numerous spawning hotspots – Brothers, Hastings and Lynn creeks, along with Capilano and Seymour rivers, to name some.

“When I moved to Vancouver, I heard about salmon in the city and I got super excited because I have a thing with fish and I always enjoy that,” says Lessa. “I’m from Brazil, I have a degree in biology, and back home I used to do this kind of work, so I was already working in freshwater environments with scientists and NGOs and universities.”

But Lessa endeavoured to do something a little different this time. After documenting various salmonids and their natural habitats in various Metro watersheds during a two-year period, Lessa released Urban Salmon earlier this year, a coffee table book which he touts as “the first documented photography project featuring salmonids in the urban environment.”

He’ll be giving a presentation, called Under the Surface: Vancouver’s Urban Salmon, as part of Lynn Canyon Ecology Centre’s One Earth Speaker Series next month.

Noting that for thousands of years, millions of salmon completed their oceanic journeys by returning home to the estuaries and rivers of early Vancouver, Lessa says that since industrialization many of the streams and watersheds are now gone, with urban development and runoff impacting the remaining salmon.

“The idea of the presentation is to show people how close we are. I try to show images that at first glance people say, ‘Wow, this could be anywhere, like in the Skeena [River] or Alaska – anywhere but Burnaby or North Vancouver,’” he says.

The hope, according to Lessa, is that by sharing his book he can impart a sense of empathy for the various watersheds that crisscross the North Shore – and in the process get people to further understand how fragile the connection is between urban development, migrating or spawning salmonids, and our local waterways.

He chooses to focus his energy less on how salmons’ numbers have been impacted by landslides along the Fraser River and an ever warming climate, than on how we can make sure the remaining migrating fish are well-cared for.

“We’re still getting some,” he stresses. “If we portray the picture like salmon are disappearing, people will think, ‘Well, there’s no more salmon in this creek, so why should I care?’ 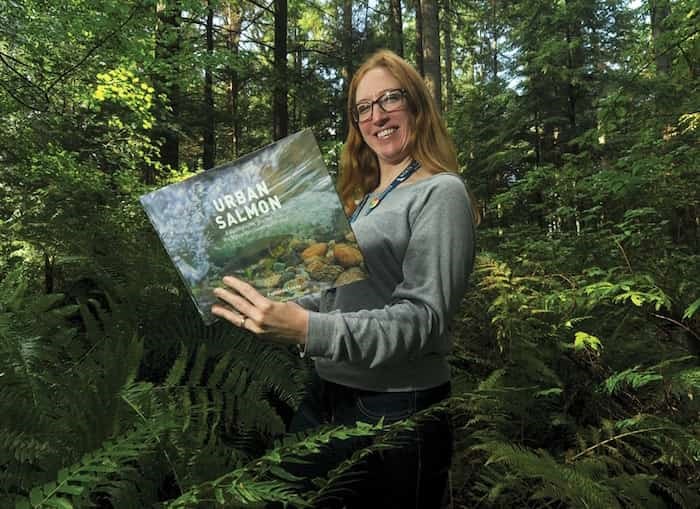 Cassie Allard of the Lynn Canyon Ecology Centre holds up a copy of Fernando Lessa’s Urban Salmon: A Photographic Journey into the Metro Vancouver Watershed. Lessa is giving a presentation at the ecology centre on Oct. 5. Photo: Mike Wakefield / North Shore News

An ally and advocate of the work of North Shore Streamkeepers, Lessa was taking photos of salmon in Capilano River last year when he noticed debris such as old fishing gear, Kevlar fishing line, and fish hooks polluting the river. He contacted the Streamkeepers to organize a cleanup, which took place after a group of divers converged following Lessa’s tip. “It’s a way for me to give back,” he told the North Shore News at the time. “When I’m diving I see things in a different way.”

He continues to work with other local stewardships groups and hopes his ecology centre presentation, along with the new book, can encourage people to take better care of their local water sources. “I say the best we can do is, go and check your creek.”

The journey that fish and water undertake together is simply a part of who Lessa is, he says. The name of his Brazilian hometown is Piracicaba, which roughly translates to the “place where the fish stops” because the city has a massive waterfall which fish use to swim upstream to reproduce. He says that for ages, that’s what made the fishing so good.

But in Piracicaba, close to the dense Atlantic Forest, things have changed during the last many decades. It’s an environmental pattern that’s similar to what’s been happening in B.C., according to Lessa, noting historically low levels of migrating salmonids recorded this year.

“Fish would just concentrate by the waterfall – but unfortunately not anymore,” he says.

Video: This Vancouver couple spotted the three most obvious signs of a tourist
Aug 6, 2022 1:39 PM