Vancouver police will continue to arm officers with rifles at some of the city’s large public events and block roads with dump trucks to deter any threat of terrorism, says a report going before the Vancouver Police Board Thursday.

Vancouver police will continue to arm officers with rifles at some of the city’s large public events and block roads with dump trucks to deter any threat of terrorism, says a report going before the Vancouver Police Board Thursday.

The report is in response to a formal complaint lodged with the Office of the Police Complaint Commissioner that argued such a public display from the police is “overkill” and “it looks like fascism.” 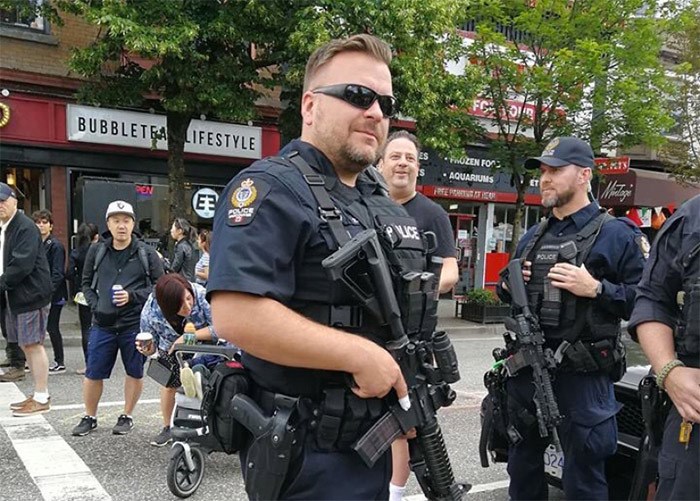 The department has recommended the board dismiss the complaint, which was received in June after police armed with carbine rifles were deployed at Italian Day on Commercial Drive.

“The presence of over-armed police is both intimidating and triggering to a lot of the general public,” said the complainant, whose name was redacted from the written complaint, which accompanies the police report. “It doesn’t make people feel safer or protected, it looks like fascism you would expect in third world dictatorships.”

The complainant noted many immigrants and refugees who have settled in Vancouver have come from countries ravaged by wars. The presence of police with rifles makes people nervous, the complainant said.

“Other minority groups and First Nations people are also triggered emotionally by heavily armed police, depending on their own personal and historic relationships with police and Canada as a country,” the complainant said.

The complainant suggested “speed bumps or sand bags or road blocks of any variety” would be more effective in stopping a moving vehicle than rifles. (The complainant did not complain about the presence of dump trucks on Commercial Drive during Italian Day).

The VPD report cited an increase in “terrorism-inspired vehicle ramming attacks” in North America and Europe in its rationale for deploying officers with rifles and blocking roads with dump trucks.

From 2013 to 2017, terrorists carried out 25 attacks with vehicles in North America and Europe, resulting in 156 deaths and 790 people injured.

More than half of the attacks involved the perpetrator exiting the vehicle used in the crime to carry out additional violence with a bladed weapon, gun or explosives.

“The VPD acknowledges the complainant’s concerns that the sight of officers with carbine rifles can be concerning, however, in reviewing best practices and speaking with a subject matter experts, we are satisfied that this strategy is proportional in keeping the department’s  public safety mandate,” the report said.

More than 200 public events occur in Vancouver each year, with only five per cent requiring additional public safety measures such as rifle-equipped police and dump trucks.

Those events include the Celebration of Light, Canada Day, New Year’s Eve and the Italian Day event, which was spread over 14 blocks and attracts about 300,000 people.

Remembrance Day events in Vancouver have also seen an increased presence of police armed with rifles. The public display is in response to the shooting in 2014 of soldier Cpl. Nathan Cirillo at the National War Memorial in Ottawa and the death of Warrant Officer Patrice Vincent in Quebec, who was murdered in a hit-and-run by an Islamic extremist.

The report said “the biggest advancement in police capability to respond to active deadly threats in Canada” has been the introduction of the carbine rifle.

“When equipped with the modern electronic sight, the carbine is both incredibly fast and extremely accurate at distances much farther than handguns, and could achieve a disabling shot, including in crowd situations,” said the report, noting "almost all major cities in North America would include long rifle over-watch where the public has gathered in large public spaces."

The police board will review the report when it meets Thursday at 1 p.m. at the VPD’s Cambie Street precinct.