Despite declining prices from the effects of COVID-19, the market is still hot.

A recent report finds that Vancouver has the second-highest average rent across Canada for one-bedroom apartments and the highest rent for two-bedrooms. However, the market shows a continued downward trend as the effects of COVID-19 become more pronounced on rent prices.

At the start of its report, Padmapper.ca notes that Toronto and Vancouver rents have hit another record month of declines. That said, Toronto still has the highest rent for a one-bedroom apartment Canada-wide, costing $2,100 for the month of July. It also has the second-highest rent for a two-bedroom, which costs $2,700.

Overall, 9 cities were on an upward trajectory last month, 9 downward, and 6 remained flat.

Padmapper notes that, "As Canada begins to reopen and people start thinking about their moves again, more cities than in previous months showed increases in monthly rent changes. As the pandemic persists on and working from home has become the new normal, it seems the demand for rentals has shifted away from the most pricey areas, like Toronto and Vancouver, and a significant amount of that demand is moving toward neighbouring, less expensive areas, like Barrie and Burnaby." 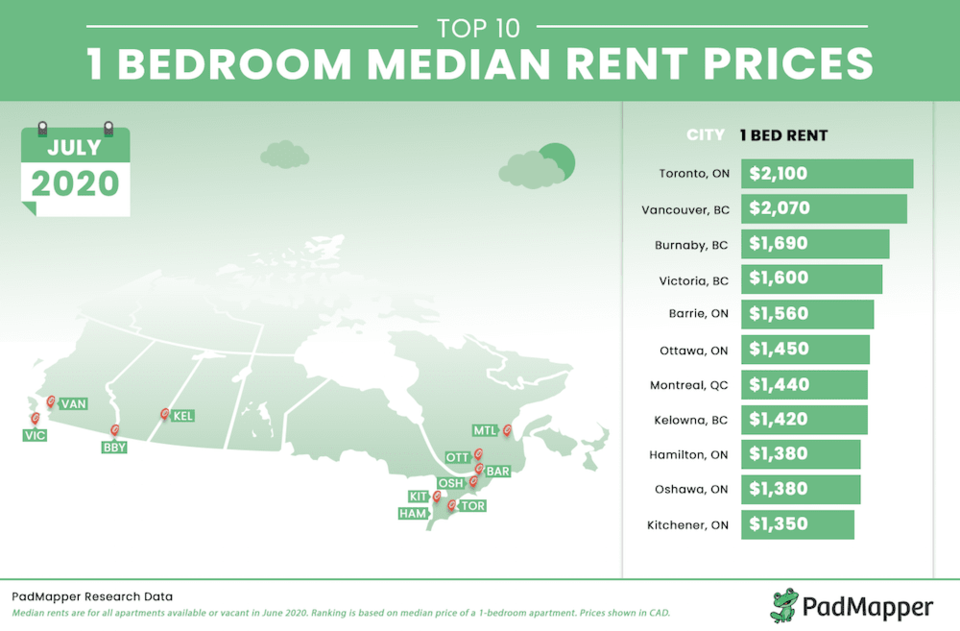 The report is based on all data available in the month prior to publication. Any data that is reported does not include short term or AirBnb listings.