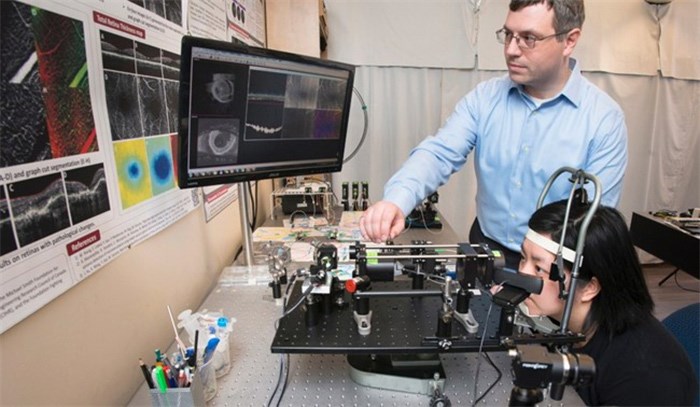 A British Columbia engineering science professor has developed a high-resolution scanner that he says will revolutionize how eye diseases are diagnosed to prevent vision loss.

Prof. Marinko Sarunic of Simon Fraser University said doctors currently use low-resolution scanners that can assess the cause of patients' dead retina cells.

"Because the resolution is low, they don't detect small changes, they detect big changes," he said. "What we want is to see the changes to the retinal structure before they're obvious in a person's vision."

A scanner built on billiard-sized tables is now used at a few universities in the world for research purposes but it's too big and complicated for routine diagnosis of diseases such as glaucoma, diabetic retinopathy and wet age-related macular degeneration, Sarunic said.

"The problem is the technology is so inaccessible that it's not in a place where it can help. We want to bring the technology to the clinics, to the front lines, where it does have the potential to help."

Compared with the large, hard-to-use research scanner, his is about the size of a shoe box and uses medical imaging, or optical coherence tomography, for 3-D cross-sectional images of the retina, Sarunic said.

The technology is being licensed to a British Columbia-based startup company that's working on commercializing it with the help of an American backer.

Only two other groups are working on similar technology, one in Boston and another in Austria, Sarunic said.

"It's very unique, still, worldwide," he said of the scanner he has spent a decade developing as part of his research with ophthalmologists and vision scientists.

It was tested for eight months at Vancouver General Hospital in 2016 and again for about three months this year and has been well received for its ability to produce images of fine capillaries, blood vessels and photoreceptors, the light-sensitive cells in the retina akin to pixels in a photograph.

Dr. Eduardo Navajas, an ophthalmologist who was involved in the testing at the hospital, said the scanner eliminates the need for dye injections that are currently used to diagnose and monitor eye diseases.

He said Sarunic's imaging technology has allowed doctors to diagnose and treat eye disease before patients permanently damage their retinas.

The Canadian National Institute for the Blind says about 500,000 Canadians are estimated to be living with significant vision loss from diseases such as age-related macular degeneration, diabetic retinopathy and glaucoma.

Frances Nickerson, a low-vision rehabilitation therapist for the institute, said a 2012 report it did says vision loss cost the health-care system $19 billion.

"It was projected at that time that vision loss was going to increase 30 per cent by 2024," she said, adding that's partly due to the aging population, but people often don't seek medical help until their daily life is affected.

That includes costs for surgeries and visits to eye clinics as well as lost productivity because people who lose their vision tend to become less mobile, depressed from being socially isolated and may fall, often fracturing their hips, she said.