'The fight for equality and recognition isn't over': B.C. premier marks Vancouver Pride

It's usually one of the hottest spots in the world for celebrating Pride, but this year's festivities in Vancouver will be significantly subdued thanks to the ongoing coronavirus (COVID-19) pandemic.

"Vancouver's Pride Parade is normally one of the largest events of the summer, bringing together over 650,000 people to march in the streets. This year, most of Vancouver's Pride events, including today's parade, are being celebrated online or in smaller groups to keep communities and vulnerable people safe as we ease out of COVID-19 restrictions," notes British Columbia's premier, John Horgan, in his annual statement on Vancouver Pride.

Vancouver Pride Week 2021 kicked off on July 26, as the City of Vancouver held a small flag-raising ceremony at City Hall. Waving proudly areTransgender and Progress Pride flags, as well as four Two-Spirit flags from the xʷməθkʷəy̓əm (Musqueam), Skwxwú7mesh (Squamish), and səlilwətaɬ (Tsleil-Waututh) Nations, plus the Greater Vancouver Native Cultural Society are being displayed.

"Pride means many things to many people. For some, it's a protest against ongoing discrimination and violence against 2SLGBTQ+ people. It can also be a celebration of love and joy, and a pledge of allyship with the queer community," says Horgan.

Around Vancouver, particularly in the city's vibrant West End neighbourhood, Pride events and displays have been up and running all week.

The Vancouver Pride Art Walk has a bunch of stops with everything from musical steps to a giant lace peacock to out-of-this-world paintings. Vancouver Pride says the pieces are meant to celebrate queer folks and culture. 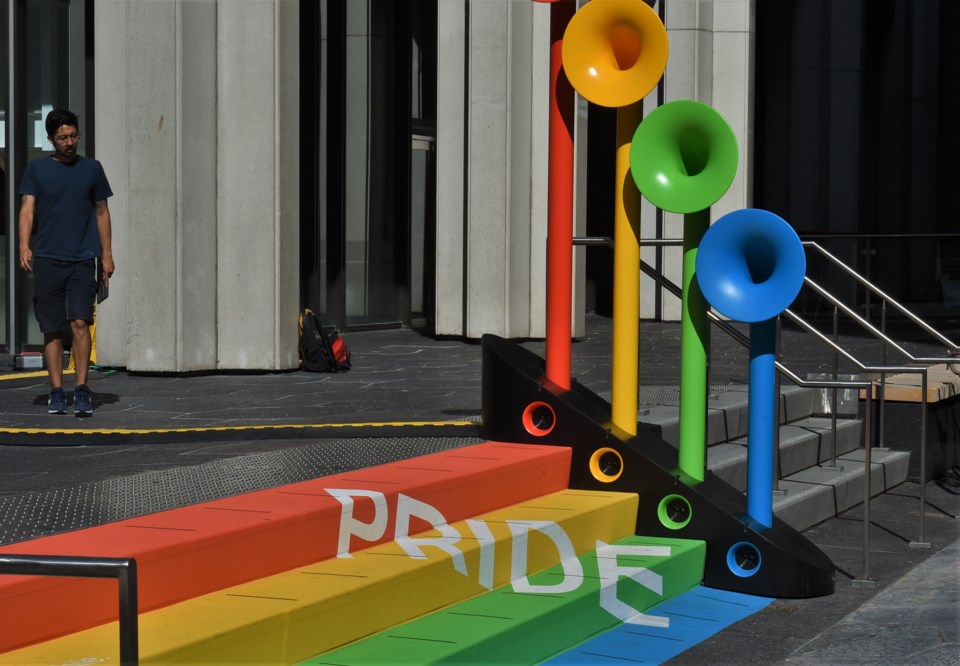 Step With Me brings an audio component to the art walk. By Brendan Kergin

Horgan, however, remarks that while being online means Pride is now a globally-accessible event, it also ups the chance of being marred by "people who spread hate, violence and harassment anonymously from behind a screen."

"But Pride is not cancelled. Virtual and decentralized celebrations mean every voice needs to be that much louder in the fight for change," Horgan continues.

"While progress has been made, the fight for equality and recognition isn't over. The hard work must continue," acknowledges the premier.

"We must continue to take action. Together, we can build a province where everyone is free to live without fear of violence or discrimination, and where everyone is treated equally and with dignity for who they are and who they love."

With files from Thor Diakow and Brendan Kergin