The new fenced dog park area offers 3,600 square metres of space where humans can sit and watch their four-legged best friend run around. 🐶

There’s a new off-leash dog area for your furry friends to explore and play at in North Vancouver.

The City of North Vancouver has completed the new Lynnmouth Park off-leash dog area, between Main and East Third streets, at the south end of the park.

In a community outreach session, the city says there was an “even split” between respondents who supported the off-leash pooch area and those who were opposed to changes at the park.

Supporters were happy to be getting a “convenient, contained and formal off-leash area with amenities such as seating and dog waste bins.” They were also pleased that the landscape focuses on native plants and includes a pollinator garden at the park entrance.

Meanwhile, opponents were concerned the off-leash area was “too small” and “would result in degradation of the grass and impact site drainage.” They also thought the “additional fencing would negatively impact the esthetics of the park.”

With the new space now ready, the city is reminding dog owners that the main path through Lynnmouth Park is on-leash to protect the surrounding habitat.

The city has been implementing trail and habitat improvements in the park since 2018, with a focus on restoring streamside habitat along the west bank of Lynn Creek to help support local fish and wildlife populations.

Work on trail improvements is continuing in the area. 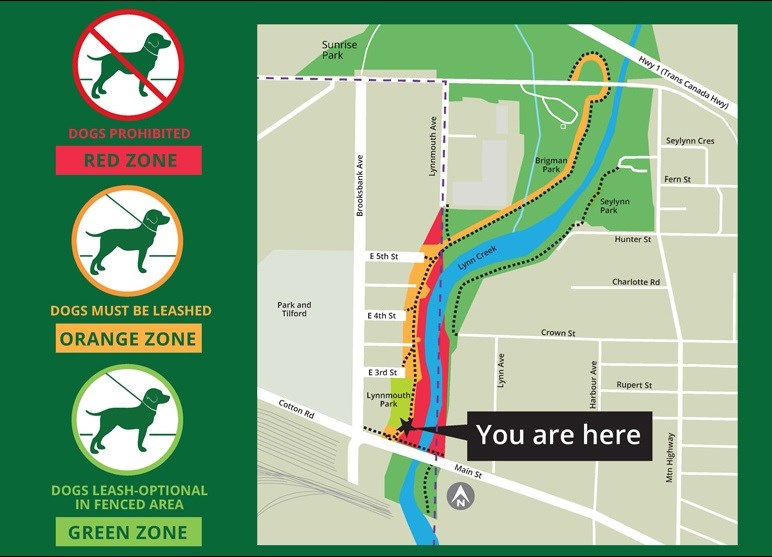 A map of the Lynnmouth Park areas where dogs can be off leash and where they have to be on leash. By City of North Vancouver