TransLink unveiled its new RapidBus program Tuesday, which includes five regional routes, with the first ones launching in January 2020.
Jul 23, 2019 11:53 AM By: Kelvin Gawley 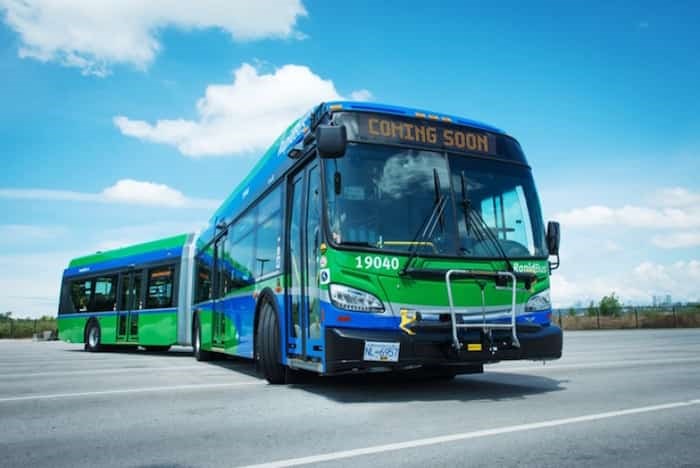 Burnaby riders will have to look for this new colour scheme for the RapidBus program. Photo: TransLink

TransLink unveiled its new RapidBus program Tuesday, which includes five regional routes, with the first ones launching in 2020.

RapidBus will serve 41st Avenue in Vancouver, Lougheed Highway between Maple Ridge and Coquitlam and Marine Drive on the North Shore, he said. TransLink will also rebrand the 96 B-Line along King George Boulevard in Surrey and the 95 B-Line in Burnaby on Hastings between Simon Fraser University and Burrard Station as RapidBus lines.

With farther spacing between stops, all-door boarding and road priority measures, the new bus service will be up to 20-per-cent faster than regular buses, Desmond said. The new routes will have a combined capacity of 20,000 people per hour during rush hour, he said.

“The B-Lines have served us very well over the years, but it is now time to step up our bus game,” he said. -

Desmond said the articulated buses will be painted a distinctive green and blue, making them easier to spot.

He said TransLink will launch two more RapidBus routes, in Surrey and Richmond, in 2021.

The 99 B-Line will not be rebranded because it will be eventually phased out when a subway is built along Broadway, Desmond said.