Local leaders flocked to a Vancouver event put on by the Consulate-General of the People's Republic of China Wednesday. 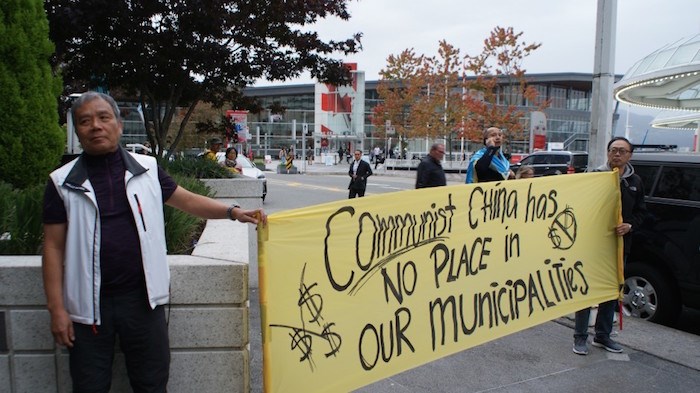 Protesters outside a Union of B.C. Municipalities reception hosted by the Chinese consulate say taking money from the Communist government is a way of buying influence. Protester Wing On Cheung of Richmond (right) called the reception “bribery.” Photo by Jeremy Hainsworth/Glacier Media

Despite Union of B.C. Municipalities (UBCM) delegates voting 65.5% against accepting foreign sponsorship money for its annual convention, local leaders flocked to a Vancouver event put on by the Consulate-General of the People's Republic of China Wednesday.

But even as they sipped cocktails and snacked on finger food, protesters outside made known their opposition to the bash and its funding course.

“UBCM should not be taking money from foreign governments,” Port Coquitlam Mayor Brad West told a protest outside the downtown Vancouver venue, standing with fellow council members Steve Darling and Nancy McCurrach and members of Canadian Friends of Hong Hong (CFHK) and the Vancouver Society in Support of Democracy.

“The government of China is looking to expand its influence in British Columbia,” West said.

“For UBCM to accept funds from the Chinese consulate is a total betrayal of Canadian values,” she said.

The consulate general has been a major reception sponsor for the annual convention for some years, this year at the Vancouver Convention Centre.

It’s at the convention that local government delegates from throughout B.C. debate municipal issue. Resolutions from those debates go toward lobbying Victoria on provincial issues.

With China holding two Canadians and two others facing death penalties in the wake of the arrest of the chief financial officer of China-based telecommunications giant Huawei, it was West who led the charge against the sponsorship.

Standing with dozens of protesters outside a Vancouver hotel, many people masked to avoid identification, West said while some have forgotten jailed Canadians, many have not.

And then they went inside and laid care packages for those prisoners at the door of the reception room as outgoing UBCM president Arjun Singh watched.

West asked the UBCM several months ago to stop taking the reception funding, arguing some of China’s actions are hostile to Canada and that taking the consular money reflects poorly on the organization.

West maintains municipal politicians should realize China is not sponsoring events “out of the kindness of their hearts.” Rather, he said, it’s a slow and methodical form of gaining influence.

Protester Wing On Cheung of Richmond called the reception “bribery.”

“It is definitely unacceptable,” he said.

In response to concerns, the UBCM polled delegates Wednesday on conference funding topics. Almost 24% agreed the UBCM should continue to take foreign funds and 84.6 thought it should keep members’ registration fees as low as possible.

Of course, those questions led up the final question about utilizing foreign government sponsorship – an idea delegates roundly rejected.

But, none of that was deterring municipal leaders like Victoria Mayor Lisa Helps, who earlier in the day said she would attend the Chinese reception.

Helps said she had been invited, and that one of Victoria’s sister cities is Suzhou, China.

“I go to all of the receptions I’m invited to,” Helps said. “This one is no different.”

“I’ve attended every year,” he said.

He said New Westminster has a sister city in Lijiang, China. He said his family also hosts students from China and discusses Canadian values and democracy with them.

Fears of undue influence are not new. In 2010, the former head of the Canadian Security Intelligence Service said some B.C. politicians were under the influence of the Chinese government.

Politicians from communities such as Osoyoos, Kimberly, Terrace, Hope, Armstrong, Grand Forks, Vanderhoof, 100 Mile House and Invermere attended. Other B.C. government officials as well as consular staff from countries such as Thailand and Malaysia joined them.