Remember the federal election (somehow only six months ago), when the incumbent Trudeau government pounced on the opportunity to get some cheap votes by promising to ban "assault-style" weapons?

It was in the wake of the murderous spree that two Port Alberni teens went on in Northern B.C., and back then I wrote that the Liberals leveraging that tragedy was a useless pile of political crap, meant to fool the average Canadian who doesn't know anything about firearms into thinking the government was going to do something to make them more safe.

The government was re-elected, of course, and they came through on their election promise this week, as you've probably already heard and are likely happy about.

Unfortunately for you, the new ban which makes 1,500 variations of guns illegal to obtain is not exactly as it appears.

Banning "scary looking" guns - which are functionally the exact same as semi-automatic hunting rifles - is designed to do nothing more than trick a large percentage of the public who are freshly horrified by another tragedy in which a deranged criminal murdered Canadians.

It's meant to make you think that you're more safe. But you're not.

But you've heard that argument already, from the annoying gun lobbyists who scream about any minor move the government makes. It's their job to do that, and they do it well (though thankfully not as effectively as their NRA counterparts to the south of us do).

The reason you're no safer is partly because the government didn't ban a lot of other guns with the same functionality. One of them is likely the cheapest, most widely-owned "assault-style" (scary looking) weapon: the SKS.

If it looks and sounds familiar, it's because the SKS is the weapon that Kam McLeod and Bryer Schmegelsky used in their killing spree last summer. They had two of them, actually. One a little scarier looking than the other. Both cheap.

If you're a licensed gun owner who holds their PAL, like Kam McLeod was, you could go into a store right now and buy one of these for under $300. Heck you could buy and stockpile a hundred of them. 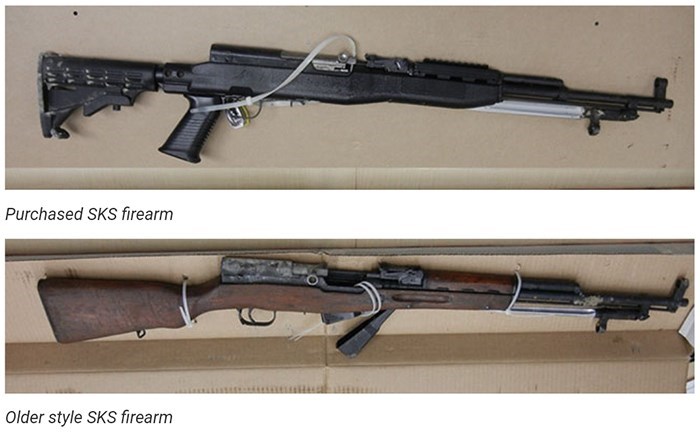 The government conveniently left the SKS off of the banned list because they know a large number of people own them, and they weren't prepared to spend what little political capital they have left with law-abiding gun owners.

However cynical it may be to keep this particular model legal while campaigning on guns like it being banned, the SKS isn't the only semi-auto that's not on the new banned list that's cheap and which you can load multiple rounds into (5) and shoot off fast. Far from it.

If the Liberal government wanted to make an actual difference and not just fly a symbolic flag by banning "scary" guns, they'd ban semi-automatic weapons outright.

If they did that, it might make you marginally more safe when it comes to mass shootings.

It would lose them a healthy amount of votes though, so don't expect it to ever happen.