OPINION: Vancouver's mayor thinks other politicians will be championing an initiative of his for the next 22 years

Mayor Gregor Robertson announcing in January that he will not seek a fourth term as mayor. Photo Dan Toulgoet Things get crazy during election years in Vancouver. 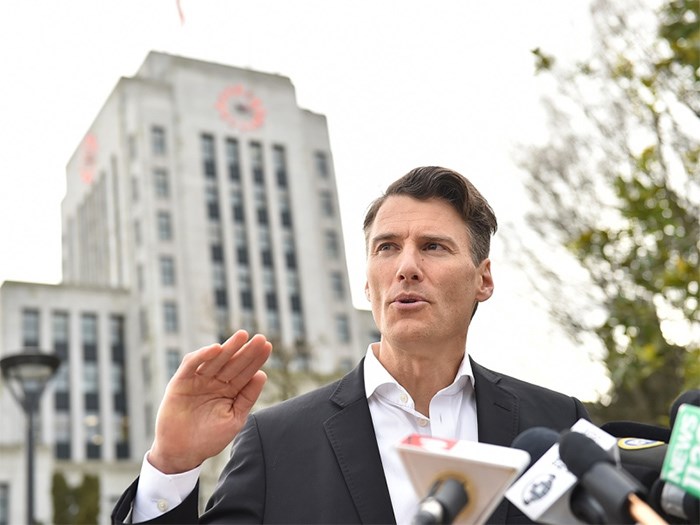 Mayor Gregor Robertson announcing in January that he will not seek a fourth term as mayor. Photo Dan Toulgoet

Things get crazy during election years in Vancouver. Seasoned #vanpoli columnists who write ones which don't self-describe as "stupid" call it "silly season".

In our city we typically get a bunch of partisans crying foul over wrongdoings committed by the ruling party. We also get a healthy dose of fringe candidates making wild claims. There are deafening screeches on social media coming from all sides of every issue. People lie. Misshaped, mutated and sometimes bare skeletons get dug out of closets and paraded in front of the local media. It's chaotic, and often entertaining, silliness.

This season his been fairly tame so far. Beyond the NPA's riff with Hector Bremner, a Green Party candidate being forcefully ejected from the slate due to failing to disclose to the party that he has a pending lawsuit which calls us (yes, V.I.A.) a "front company", and Wai Young in general, there hasn't been too much silliness.

But it has begun. We're starting to see some wild claims from politicians, some not-surprisingly coming from a person who's not even running on October 20th: Mayor Gregor Robertson.

His @VanMayorsOffice Twitter account which was set up by his staff in March of 2011 (and will presumably be handed down to the next mayor of our city) tweeted out this quote from him yesterday.

.@mayorgregor "Vancouver is aiming to be a zero waste city by 2040. We've already made big progress diverting compostable organic materials from the garbage & now with the @LFHW_ca campaign we hope to inspire & empower Vancouver households to make their food go further." #vanpoli pic.twitter.com/DKjHquswWN

What he's saying is he believes that up until the year 2040, a span of more than 2 decades after he leaves city hall, the City of Vancouver (with a capital C) will have completed his initiative - which was just adopted this week - ensuring we're a "zero waste city" in 22 years.

Assuming myriad politicians in the 5 terms following Robertson's last will champion this (admittedly important) plan is almost as silly as saying he was going to end homelessness by 2015. That particular statement bit Gregor in the ass when in 2015 the homeless number was higher than it had ever been.

Make no mistake, aiming to become a zero waste city in 22 years is a noble and worthwhile goal which we can maybe achieve. It's one that involves a shift that has been happening for years. However if we're to take Robertson at his word, as voters have done in the past, we will probably be seeing an increase in the amount of waste the city produces by the year 2040. Piles and piles of Starbucks cups, No Frills plastic bags and "Greenest City" promotional trinkets as far as the eye can see.

Attainable or not, leaders pointing out their lofty goals for the City that will hopefully be fulfilled by future mayors and council seems to me like a nice way to avoid talking about things that could be immediately changed, or things that could have been changed over 3 terms as mayor. During an election year.

What's Robertson's 22-year plan for housing in our city, I wonder? And will Ian Campbell, the new mayoral candidate for his outgoing party, Vision Vancouver, have any ideas to help alleviate the housing crisis that took off on his party's watch? Will he admit that Vision owns it? Not likely. Not during silly season anyway.

- COPE's mayoral candidate steps down after suffering a stroke

- Nicholas Chernen Part 1: This Vancouver Greens candidate "forgot" he had a pending lawsuit

Nicholas Chernen Part 2: Here's what the Greens candidate who "forgot" he had a lawsuit had to say about it

Nicholas Chernen Part 3: The litigious Greens candidate who “forgot” he had a pending lawsuit has “resigned”