Will Vancouver see improvements in housing, transit and opioid crisis by year’s end? 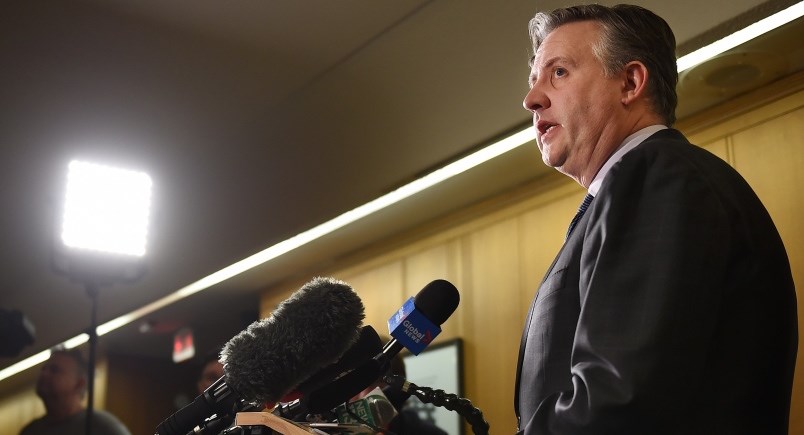 Mayor Kennedy Stewart, seen here at a news conference last week at city hall, is looking for a breakthrough year in 2020 on housing, transit and the opioid crisis. Photo Dan Toulgoet

That means Mayor Kennedy Stewart and his agenda are back in the council chamber for all to see and hear.

So what’s his plan for these next 12 months?

Well, if you’ve heard him speak over the past two weeks — as I did at city hall last week and in alley in South Vancouver Monday after a news conference — he’s hoping for a breakthrough year for Vancouver.

A breakthrough for the mayor would mean substantial investments from the province and the feds for housing. It would mean a financial commitment from the feds to extend the yet-to-be-built Broadway subway from Arbutus to the University of B.C.

He also wants a pony for every man, woman and child in the city.

But the mayor’s oft-repeated agenda of housing, transit and opioids appears to be catching some fire with the feds, according to Stewart, who boasted of the access he’s getting with Prime Minister Justin Trudeau and his cabinet ministers.

“I have to say the access that both the prime minister and deputy prime minister [Chrystia Freeland] are affording me is a bit overwhelming,” he said.

Same goes for access to Premier John Horgan and his cabinet ministers, including Housing Minister Selina Robinson, whom he spent Monday morning with at a news conference to announce a 102-unit affordable housing project.

The mayor has said previously he believes the agendas of the NDP-led provincial government and Liberal-led federal government align closely with his priorities.

He’s talked — as he did this month — about how there is a window open right now to get investments from senior levels of government, knowing full well that Trudeau and Horgan won’t be in power forever.

Readers well know what the mayor thinks about the Conservatives after he publicly stated during the recent federal election campaign that then-Tory leader Andrew Scheer would be “a disaster for the city” if elected prime minister.

“It’s the first window, I would say, we’ve had in a long time,” Stewart said of his relationships with province and the feds.

“I guess we have some benefit that both federal and provincial elections are imminent — provincially perhaps sooner than the federal. But [the NDP and federal Liberals] are going to have to show they delivered, and this is the period where money has to land.”

With Trudeau and Freeland a text away, Stewart also pointed out that federal Health Minister Patty Hajdu visited the Insite supervised injection site with him last week.

The mayor met with all of the city’s MPs last week, too.

In the fall, he was in Ottawa after Trudeau’s re-election to meet with the prime minister and several of his ministers, including Catherine McKenna, the federal minister responsible for transit funding.

As you’ve probably heard, Stewart wants the feds to hand over $4 billion to extend the yet-to-be-built Broadway subway/SkyTrain from Arbutus to the University of B.C.

Stewart took to Twitter after his meeting with McKenna, saying he was grateful to the minister for meeting with him on the first morning of her new ministerial role.

“Totally agree that transit investment is one of best ways to combat climate change,” he tweeted, complete with a photo of him and McKenna smiling.

The Liberals are on record of supporting a permanent transit fund for Metro Vancouver. What that translates to in dollars is not a number I’ve seen since the re-election of the Trudeau government.

With all that goodwill between Stewart and governments, the assumption would be that Vancouver will be in a better place on housing, transit and the opioid crisis by year’s end.

But that’s an assumption based solely on the political warmth the mayor says he’s receiving from Victoria and Ottawa. Or maybe he’s receiving more than that and not saying.

In the meantime, the facts:

The mayor laughed at my understatement of a statement that he had a lot of work to do this year to go beyond the handshakes and smiles with the provincial and federal big hitters.

I’ve marked my calendar to follow up with Stewart in December.

Perhaps we could do the interview on a couple of ponies.