Is Vancouver council chamber getting a makeover? 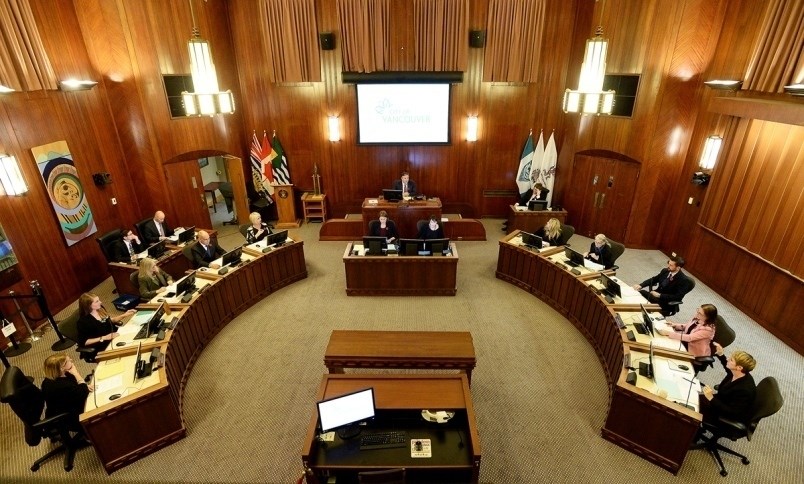 THIS JUST IN: MAYOR KENNEDY STEWART’S DESK IN THE COUNCIL CHAMBER WILL NOT BE RELOCATED!

Seriously though, I can’t recall using all caps like that in a sentence — a thrilling moment, I’m here to say — but thought I’d try it out to see whether it enticed you to read further.

If it has, thank you very much.

If it hasn’t, a riveting political tale about the mayor and his desk is obviously not the genre of creative non-fiction you crave.

I feel for you.

Anyway, all that nonsense I just wrote is me tragically burying the lede about a fresh dump of non-confidential memos from city manager Sadhu Johnston and deputy city manager Paul Mochrie to council that are now posted for viewing on the city’s website.

Which is to say two things: that was one heck of a wordy sentence and, secondly, the memo dump is always kind of semi-exciting for city hall enthusiasts.

The memos, however, are not as fresh as Wednesday’s powdery snowfall, with the most recent batch covering the months ending September 2019.

Still, there’s some interesting stuff in there, including insight into the Oppenheimer Park homeless camp, the Marathassa oil spill payment, the removal of dangerous donation bins, the city’s secondary suite program and court stuff on the pipeline project.

But since I went all caps on you to begin this piece, let’s get to that Sept. 5, 2019 memo from Mochrie about the mayor’s desk. Turns out there was a movement afoot to remove and rearrange the furniture in the council chamber.

The driver of all this was not a call from a home renovation reality TV producer, but to look at opening up space for more city staff to join the inner quadrant of the chamber instead of being relegated to the public gallery.

As it stands now, Johnston and Mochrie share a desk behind councillors Pete Fry and Adriane Carr. The city clerk and her assistant share a large desk in front of the mayor’s desk.

To the mayor’s left is a desk shared by his chiefs of staff. Across the floor, on the gallery side of the chamber, is a longer desk that can accommodate a few staff.

The rest of staff — and there is usually many filling the chairs on a council meeting day — sit with their binders and laptops in the gallery. Media types share a long desk overlooking the chamber.

That seating plan, according to Mochrie’s memo, will remain.

“Staff have determined that there is not sufficient space to provide seating for senior staff behind the mayor or to relocate the [city manager’s desk],” his memo said.

“Due to the heritage significance of the mayor’s desk, it is advised that this desk, along with the clerk’s desk, remain as they are.”

The same memo mentioned installing television monitors in the balcony and removing the small “presentation desk” on the other side of the media desk.

I learned this week the monitor idea is out and the presentation desk move is a maybe. Automatic blinds, however, are now in place and have allowed for more daylight in the chamber.

Then there’s that that weird stand/sit contraption that took over Coun. Sarah Kirby-Yung’s desk for a few months last fall.

I’m referring to that big white vertical bar thingy attached to a computer screen that blocked Kirby-Yung from view, with her voice the only evidence some days that she was present in the chamber.

As Kirby-Yung told me, the contraption was installed in September as a trial run with the goal of improving the health of councillors, whose jobs require them to sit in a chair for hours.

Standing up while doing her job was helpful, except the contraption was too big and “unwieldy,” said Kirby-Yung, who was council’s self-described guinea pig in the trial.

So off it went back to the vendor at no charge to the city, according to the city’s communications department.

“I just hoped they would have come up with something that was a little more compact and discreet,” said Kirby-Yung, noting she still wants something in place for councillors.

“It’s a health thing. I can tell you that when you start at 9:30 in the morning and you’re still sitting there at 9:30 at night — with very short breaks — your body really feels it.”

Kind of like how your body feels after sitting in an easy chair at home for several hours on a snow day and coming up with some fodder for a column to file before deadline.

THIS JUST IN: NEWSMAN OFF HIS GAME, GOING OUTSIDE TO SHOVEL DRIVEWAY AND CLEAR HEAD!