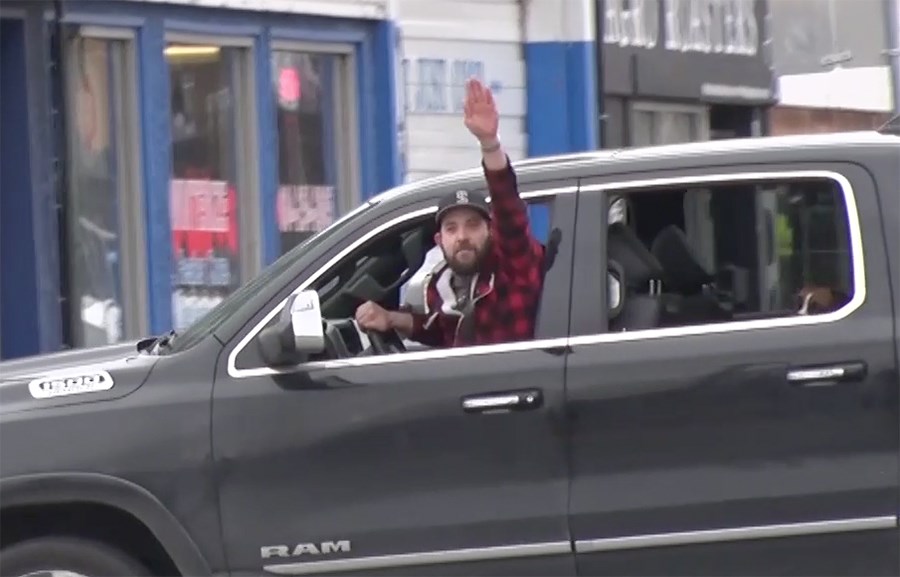 A man throws a white power salute towards protestors at Clark and Hastings on March 3, 2021Thor Diakow

We captured some unsettling footage yesterday for a story about a protest which blocked the intersection of Clark and Hastings.

A group of Indigenous youth who have organized under the title of Braided Warriors staged the protest which started on Tuesday and went into Wednesday. After roughly 24 hours the demonstration was eventually broken up by the VPD, and four people were arrested.

The group was calling for the release of Indigenous elder Stacy Gallagher who was sentenced to 90 days in jail for violating an injunction that bars people from protests at Trans Mountain sites in Burnaby. It was at the Burnaby tank farm in 2019 where Gallagher took part in a smudging ceremony and was subsequently apprehended and charged.

Our Video Reporter, Thor Diakow, captured video footage of the protest on Wednesday morning, showing what the scene looked like. He also interviewed one of the organizers who explained what they were doing and why.

If you watch the video you'll notice a man driving by the intersection, first throwing up a middle finger then giving three white power/Sieg Heil salutes, a gesture that the Nazis used at rallies in Germany. I've isolated that portion of the clip here.

If you know the identity of this white male who flashed a nazi Sieg Heil salute towards Indigenous youth protestors at Clark and Hastings yesterday please let him know we would very much like to speak with him. bobk@vancouverisawesome.com. pic.twitter.com/CgWync4MOq

As Thor describes it to me, the man was yelling profanities at the group from a block away, and once he got to the intersection continued yelling. Clearly upset that traffic was being blocked, he then decided that invoking Hitler might somehow be a good idea.

The group told Thor they see this type of trash all the time, and that they do their best to diffuse situations like it. As you'll also see in the video, the group throws peace signs back at the man, and does not otherwise engage him.

It's not immediately clear who this man is, or if he is a member of any organized hate group in Vancouver.

If you know his identity, please let him know that we'd like to speak to him.

As you can see in the above screengrab he drives a Ram 1500, is white, and was last seen wearing what looks like a Seattle Kraken hat, throwing a nazi salute while his dog sat in the back seat, innocent to the fact that his owner is a racist mouth-breather.