Cold Tea restaurant is taking cues from an old boozecan that used to operate out of the same spot
Jan 5, 2021 3:15 PM By: Bob Kronbauer 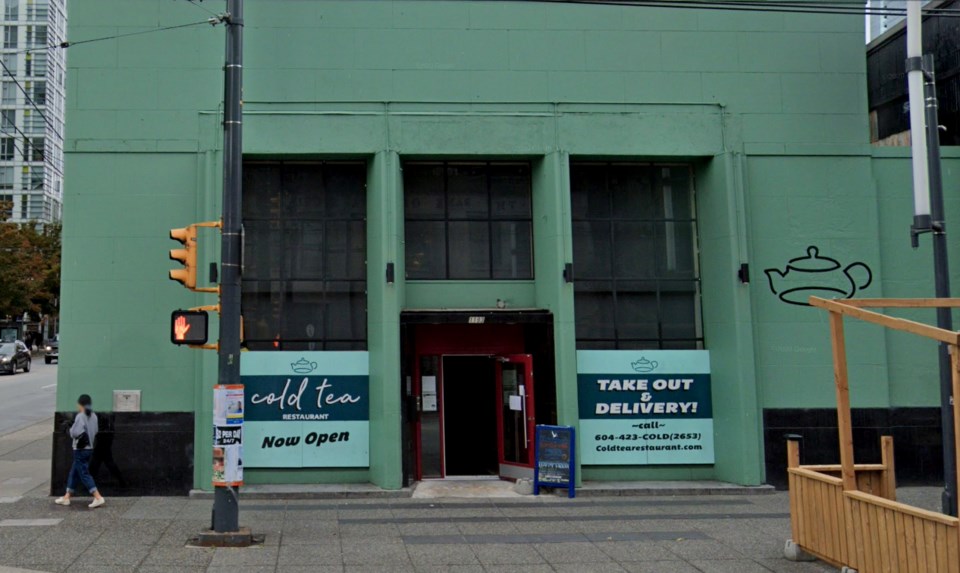 In the business of crisis PR, these days most companies take the approach of first apologizing profusely, then trying to make good as best they can, learning from the mistake they made (or at least claiming to), and quickly moving on.

That was not the case this week with a restaurant on Granville at Davie which went against a Public Health Order to make a few greasy bucks, and got dinged for the ill-advised move. They mostly admitted to the wrongdoing, however, they decided to push back on what they considered to be a "grossly exaggerated" description of their infraction.

The restaurant is Cold Tea, located at Granville and Davie. They went against Dr. Bonnie Henry's order to stop serving alcohol at 8 p.m. on New Year's Eve and were shut down for the night and fined $2,300 for holding what the Vancouver PD described as a 100-person private party, which they say went well past 8 that evening.

The restaurant's statement supplied to Vancouver Is Awesome was written by their PR representative, on behalf of owners Paul Rivas and Ron Cheng. It argued that since they're a new establishment (they opened in 2020), they "had it a lot harder than most other restaurants," and that they didn't qualify for rent relief, wage subsidies, the BC grant, or CEBA loans.

It was inferred that their desperation somehow made theirs a lesser offence.

The statement also expressed that they took exception to the description of it being "100 people," as they claimed there were only 38 people at their party, and the police "never did a head count."

Furthermore, they argued, "Unfortunately when the police stormed the restaurant through the back door, the optics weren’t good, as the group was in the process of taking pictures together, maskless."

I'll allow you a moment to either pick your jaw up off the floor or clear the tears from your eyes after laughing at that last quote.

Now, let's do a head count of our own here, shall we?

38 people partying + two owners + one PR rep who didn't talk their client out of making a bad decision or two = exactly the consequences they've faced. That would be a fine as well as disgust from the community that they operate in.

Every other establishment which serves alcohol in this province was dealt the same crappy hand that they were, and if they all decided to flout the regulations that are in place to keep us safe, we may very well never get out of this pandemic.

However, it could be argued that the owners of Cold Tea restaurant were simply following standard 1193 Granville St practice by breaking a Provincial Health Order to not serve alcohol after 8 p.m. on New Year's Eve; the previous business that operated there ran a notorious, after-hours boozecan.

While it was mostly a victimless crime without super-spreader potential, Tsui Hang Village broke the liquor law for years by secretly serving alcohol in teapots to drunken Granville strip patrons after the bars stopped serving. I know this for a fact, because I was one of those patrons.

The name of the new restaurant (Cold Tea) is a cheeky reference to the now-gone business that also made up their own rules in this space, and it would seem that the current occupants didn't only take cues for their cute name.