I shopped for toilet paper amidst COVID-19 hysteria (PHOTOS) 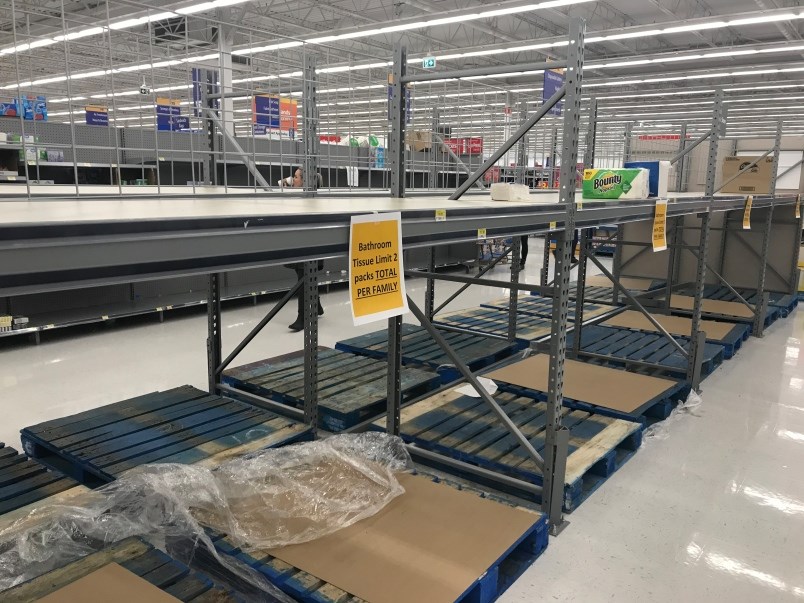 In the past week, I’ve watched viral videos of crowds rushing through Costco in search of toilet paper, I’ve seen photographs of empty shelves where toilet paper once stood, and found posts on Craigslist from low-lifes attempting to make a gain from Coronavirus fears by selling toilet paper and hand sanitizer at massively over-inflated prices.

So, for the sake of research, I spent Friday morning checking out a few stores I know had toilet paper just last week.

And, while I was shopping around took note of other items also running low on the shelves.

I started my quest at the Walmart at Queensborough Landing Shopping Centre and was relieved to see shoppers leaving the store with toilet paper in their carts as I arrived at 10 a.m.

I was obviously a few minutes too late, because when I walked to the toilet paper section there wasn’t a roll to be had, but there were a dozen annoyed shoppers questioning staff about when their next shipment would be in.

To be clear, there had been four massive shelving units filled with toilet paper not long before I arrived, but even with a limit of two packs per family, they had been picked clean.

In desperation, shoppers were grabbing the multi packs of Kleenex on sale for just under $8. (For the sake of full disclosure, I bought one too.)

I honestly hadn’t been worried about an actual toilet-paper shortage until that very second, but at that point it became a mission to find some.

I did a quick trip around the store to see what else was in short supply before heading to the Canadian Tire in Market Crossing, which I heard had stacks of toilet paper last week.

But, once again the cupboards were bare and disappointed shoppers wandered out of the store empty handed.

From there, I hit Save-On-Foods and again was excited to see shoppers leaving with toilet paper in their carts.

I rushed over to the toilet paper section and sitting on a long line of empty shelves was one single pack of toilet paper ­– and it was on sale! I felt like I’d found the holy grail.

As a matter of fact, all of the toilet paper at Save-On had been on sale, so there was definitely no price gouging going on. A friend from Chilliwack told me this week she found packs of toilet paper at a major grocery store there for $25 a pack and that is just shameful.

My tip for anyone searching for toilet paper is to stop by when the store first opens.

Here’s just a few of the other items I found in short supply during my search: