They’ve been quietly hanging on for more than 500 million years and they’ve got a fighting chance at 500 million more. 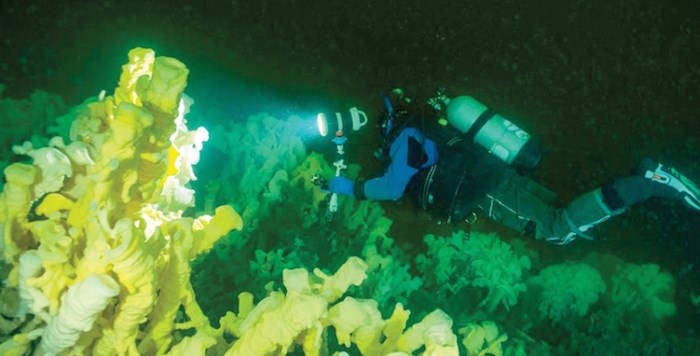 Fisheries Minster Jonathan Wilkinson made the announcement in West Vancouver on Wednesday morning.

According to DFO, the sponge reefs filter more than 17 billion litres of water per day, processing bacteria, carbon and nitrogen. But, as their name implies, they’re incredibly fragile and it takes many years from them to recover if damaged.

The ban on prawn and crab traps, shrimp and groundfish trawls, groundfish hook and line, and the use of downrigger gear comes into effect before the spring fishing season starts on April 1.

Glass sponge reefs were thought to have gone extinct about 37 million years ago but they were rediscovered by Canadian scientists in 1987. Many of the individual discoveries are credited to the Marine Life Sanctuaries Society, which has been pushing the federal government to create protected areas for them. The first glass sponge reef protection areas came into effect in 2015.

The Marine Protection Society’s director Glen Dennison said likelihood there are more glass sponge reefs down there that have yet to be discovered is “very high.” 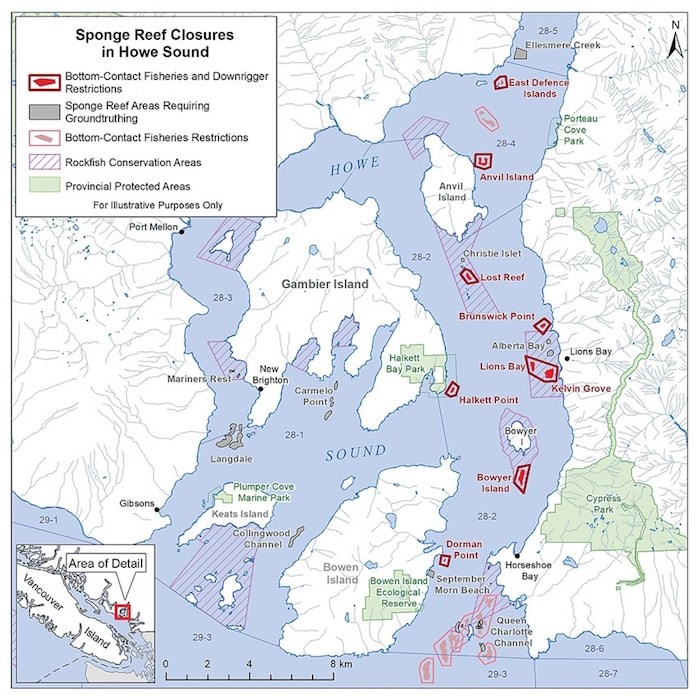 “We are continuing searching for them all the time,” he said.

While sponge reefs are most often damaged by careless activity from humans, typically fishing, warming ocean temperatures are also a threat. For two years, Dennison led a project logging temperatures near the reefs every four hours and storing the information on an underwater computer.

“If the waters goes above 11 C for any length of time, the sponge tissue is damaged,” he said. “We did see spikes quite often above 11 C in the summertime.”

The addition of the eight new refuges also has the blessing of the Squamish Nation, the David Suzuki Foundation and the commercial fishing industry,

Squamish Nation environmental advisor Randall Lewis welcomed the news as the latest in a line of initiatives the government has taken under the Oceans Protection Plan.

“The Squamish Nation chief and council of course also respect and hold our hands up for your work and announcements today. It’s going to be a better place for today and the future,” he said.

Mike Atkins, executive director of Pacific Prawn Fishermen’s Association, said the decision will hurt bottom lines in his industry, but in the big picture, it is worth it.

“Respecting the science and understanding the role sponges play in the marine ecosystem, our members support these closures despite significant economic impacts the closures will have on individual prawn fishermen and their families,” he said.

About five of the Howe Sound reefs are shallow enough they can be reached by skilled divers. Dennison beams when asked what it’s like to see them up close.

“It’s a completely different world from what we experience on the surface. It’s a very alien world. It’s incredibly beautiful. I’ve never seen anything that even comes close to it with corals in the Carribean. Nothing approaches the beauty of glass sponge,” he said. “It’s euphoria when you’re diving them.”

But, Dennison added, anyone planning to dive there should take a sponge diving course first to make sure they aren’t doing any harm.