Recently Zipcar reached out and offered me a credit so that I could try out their service and write about it here on the blog. As somebody who owns a car and hasn't ever considered joining a carshare, I admit I was initially lukewarm to the idea.

Recently Zipcar reached out and offered me a credit so that I could try out their service and write about it here on the blog. As somebody who owns a car and hasn't ever considered joining a carshare, I admit I was initially lukewarm to the idea. But then it hit me: fishing! Sure if you don't own a vehicle being a Zipcar member offers a simple and quick way to essentially rent a car short-term (and to tread lightly while you're at it) but if you do own a vehicle that's a little on the... well... gutless side and you have some heavy lifting/moving to do or a destination that's at the end of a steep dirt road then they have small trucks and SUVs in their fleet. So I took them up on the offer.

And of course I don't go fishing by myself, so I brought along my friends Suede Peterson and musician Rob Butterfield. This week I'm sharing five parts of the Zipcar fishing adventure that we went on.

In this fourth part I want to share something that I didn't know existed until a couple years back. I made the discovery late one night while searching the shallow water of the shoreline for a toad that I thought I heard calling. Freshwater crayfish!!! Here's Rob holding one that we caught... 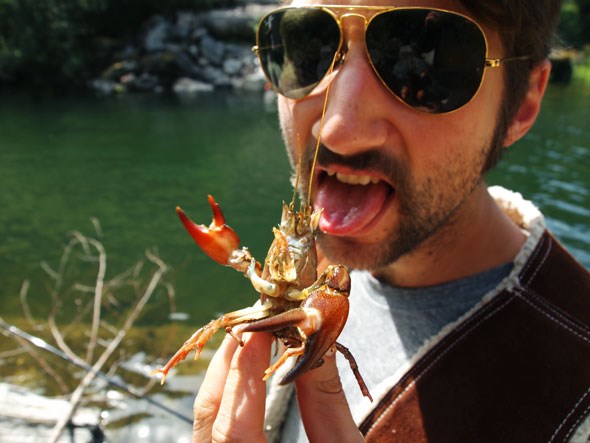 In the past we've caught ones at this lake that were about five times this size, like tiny lobsters! We gathered up a huge potful of them and cooked them up and ate them, as a matter of fact. My wife thought they tasted like mud but I thought they were delicious. If you do a Google image search for freshwater crayfish you'll either get very frightened by what you find or very excited depending on how much you like shellfish or similarly dislike insecty type things in the water. Jones Lake is full of these things.

Here's what happened shortly after the above photo was taken. Rob learns the hard way how not to hold a crayfish...

Stay tuned tomorrow when I reveal whether or not we caught any fish on our adventure!

If you're thinking about signing up for Zipcar we've got a special V.I.A. deal only available to our readers: get $75 in free driving credit by signing up at Zipcar.com and entering the code: VIA2010. You're welcome!