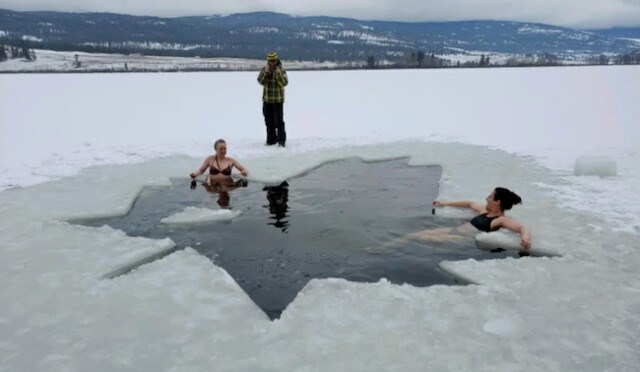 Vernon, B.C.'s Shanda Hill carved out a swimming hole on a frozen lake in the shape of a maple leaf (via Facebook/Shania Hill Ultra Athlete)

Vernon's Shanda Hill turned heads yet again on the weekend.

But this time it was for the ultra-athlete's creativity rather than her endurance, as she and her father carved ice on frozen Ellison Lake.

Hill and dad cut out a maple leaf-shaped swimming hole on Sunday (Feb. 23), and got creative with an icy heart sculpture, as well as an igloo that they later lit up in purple light.

Hill, with dog and goats in tow, clearly had some fun out on the ice, and the end of her video shows her lounging in the icy waters.

Hill, of course, is known for her completion of the gruelling Double Deca Classic in Mexico last year.

The race is the equivalent of 20 Ironman triathlons in a row.

Hill used ice baths to recover from the race's toll on her body, but Mexico never saw anything quite like this.

B.C.'s search and rescue groups urge safety as people use the outdoors for social distancing
Mar 18, 2020 2:49 PM
Comments
We welcome your feedback and encourage you to share your thoughts on this story. We ask that you be respectful of others and their points of view, refrain from personal attacks and stay on topic. To learn about our commenting policies and how we moderate, please read our Community Guidelines.