Millions of ready-to-bloom daffodils still have frozen stems, meaning they will stay in the ground for the time being while farmers hope for warmth.
0
Mar 1, 2019 12:25 PM By: Andrew Duffy

Daffodils will be picked in March on the Saanich Peninsula — it’s just unclear exactly when.

With traces of snow still visible between the rows, millions of ready-to-bloom flowers still have frozen stems, meaning they will stay in the ground for the time being while Peninsula farmers hope for warmth. 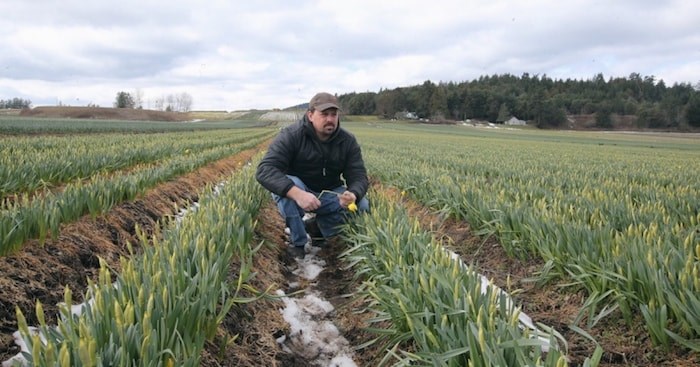 “It’s pretty stressful on the crew and the flowers,” said Ryan Vantreight, general manager of Longview Farms, the largest certified organic farm on the Island.

Vantreight said the daffodil farm — the largest in the country — had a good start to 2019 as it harvested more than half a million blooms by mid-January.

Then the cold hit, and the snow followed. “We can’t harvest them when they’re frozen and the ground is still frozen,” he said.

With recent milder weather and promised warmer temperatures, they expect to start picking again any day now, though some blooms will be lost.

It’s too early to say how many were damaged by the weather. Snow acts as a blanket and will hold them in place, but some varieties were well out of the ground and thus weighed down and damaged by the weight of snow.

“It’s not a complete disaster, but there is loss we will be challenged to recover from,” Vantreight said. “But we won’t have a sense of that until it thaws.”

“When it starts to come warmer — and it is expected to do that pretty sharply — we will need as much help as possible in the field,” he said, adding the farm has advertised all over the region for pickers who want to make quick cash.

The heavy snow this winter is just another hurdle for farmers, who have been dealing with changing weather patterns and the spectre of climate change.

“There’s no setting your watch to the seasons anymore — there’s only what happens,” said Vantreight with a laugh.

“[Farming now] is all reactionary and our relationships with customers have to be fluid and they have to be able to be pliable.

“We bob and weave and stick and groove as much as we can, but we are at the mercy of nature and have to go with what happens.”

Vantreight said change has been noticeable in the past 10 years, with wild swings especially notable in the last five.

“We still have seasonal ups and downs we plan for, but we never know if a season will be extended or shortened or if there will be a cold snap … these are things we have no control over,” he said. “You have to be an eternal optimist with nerves of steel.”

That might have to be the default setting for Island farmers from now on, according to John Volpe, associate professor at the University of Victoria’s school of environmental studies.

Volpe said the increasingly unpredictable nature of the weather is the result of climate change. He said the jet stream, which used to travel on a predictable path, has become “wobbly” with a decline in the temperature gradients between the equator and the poles.

Volpe said with that decrease comes increased variation in the stream of air currents, which leaves the jet stream inconsistent and unpredictable.

“As a result, the polar vortex, which everyone is talking about, but is not an unusual event, the pathway of that weather pattern is now encompassing a much larger window of latitude,” he said.

The result on the Island was that farmers who were picking daffodils in January had to shut down operations.

Volpe said the change cannot help but have a massive effect on farmers, from what they plant to when they plant and harvest.

Vantreight agrees, noting the current snap will have a knock-on effect for all Island farmers. “This won’t just affect the flowers — there are crops of kale, cabbage and leeks in the fields that will be affected and so will fruit growers,” he said. “We won’t see the effect until well into the next season.”