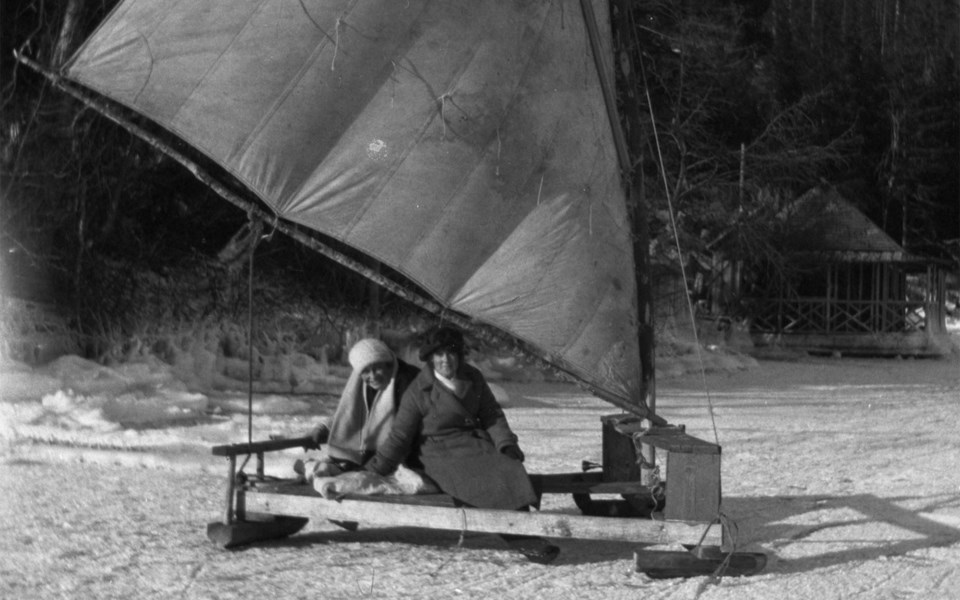 PHILIP COLLECTION - ICE ADVENTURES Myrtle Philip and Agnes Harrop on Alta Lake's first ice-boat, similar to the one built during the winter of 1977.

Despite the stories of Dick Fairhurst, who moved to the Alta Lake area in 1944, most of us living here in the 1970s thought that the big snow years would never end, and so snowmaking had never been considered. Fairhurst claimed that there had been a couple of no-snow winters in the '50s and that he had built the foundation for Cypress Lodge during a snowless February. So 1976-77 came as a severe shock to the rest of us.

Very early in the 1976-77 season, there was some snow in the alpine—just enough so that skiers could ski to the bottom of the Green Chair. Then it rained and skiers had to hike down the last 100 metres or so in the gravel and mud.

In mid-December lift operations managed to borrow a snow gun from Grouse Mountain and transport it to the bottom of the Green Chair. There used to be a small creek that ran down on skiers' right of the old Green Chair. The ski patrol put a full case of Submagel, a very potent explosive designed for underwater uses, into the creek near the base of the Green Chair. Everyone was evacuated from the area due to the obvious hazard of raining debris and the explosion created a reservoir in the creek. After a dam was built at the low end, the reservoir could impound enough water to permit snowmaking for two to three hours each day.

With this limited capability, the packer drivers were able to spread a narrow ribbon of snow that allowed skiers to ski to the base of the Green Chair. Whistler Mountain was able to open for the Christmas holidays. Those who came could ski on the Green Chair and in the T-bar bowl, but had to download on the Red Chair and the gondola. After the holidays, however, there was a warm rain that wiped out the snow on the lower slopes of the Green and Whistler was forced to close for three weeks in January 1977.

While most of the staff on Whistler Mountain had been laid off, a few of us were kept on so the ski area would at least have some core staff when the mountain was able to re-open. Those of us still employed referred to it as Garibaldi Lifts welfare. The lift company opened a soup kitchen so that its laid-off employees wouldn't starve.

During this time, the weather was mostly clear with a strong temperature inversion. The local lakes were frozen, allowing a perpetual hockey game on Alta Lake, and after running out of useful things to do, Jamie Tattersfield, the head packer driver, and I built a rather crude iceboat in the maintenance shop. We put it on Alta Lake in front of Tokum Corners and spread the word that anyone could use it as long as they brought it back.

Cheakamus Lake was frozen and clear of snow, so many locals hiked in with their skates on the snowless trail to skate the entire length of Cheakamus Lake. There were a couple of pressure ridges to jump over and the ice was incredibly noisy, constantly pinging and boinging and echoing in the narrow valley.

A small amount of snow came in late January, allowing the mountain to re-open on a limited basis. More snow came later in February, and then the real snow finally came in March. Given the shallow snow pack and early cold temperatures, there was a thick layer of well-developed basal facets, which helped produce some stupendous avalanches later in March.