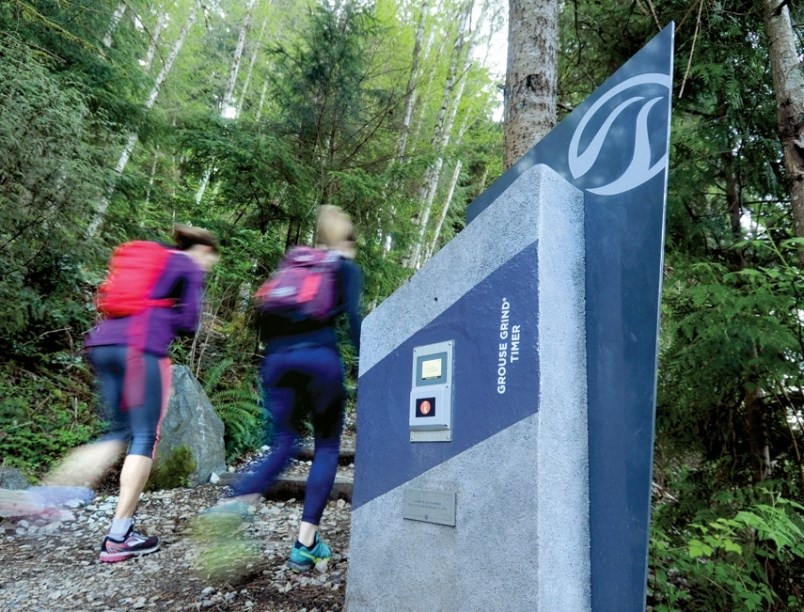 The almost $3.5-million project will include expanding and improving the staging area at the base of the mountain where people congregate before setting off into the park to provide more room for hikers, as well as construction of secondary trailheads that will allow some park users to enter and exit the park from the mountain's lower parking lot. The project also includes building some basic storage facilities for park rangers to store safety gear.

Three rest stops are also slated to be built on the Grouse Grind trail in the coming years, at places where hikers already tend to stop, like the quarter and halfway markers.

The goal is to provide space for hikers to take a break and let others pass without impacting the trail or the ecology in the area.

The federal government is set to contribute $1,390,750 and the province will kick in $1,158,842 for trail and amenity improvements that will impact the Grouse Grind, BCMC and Baden Powell trails. Metro Vancouver will contribute $927,283 to the project.

The event Thursday was a formal recognition of the project, which was announced July 3.

It also comes at a time when both regional and provincial parks are seeing record numbers, as people head outdoors to enjoy some summer recreation in the midst of the COVID-19 pandemic.

“During COVID, we have made every effort to keep our parks, open, and indeed, they have become more popular than ever,” said Sav Dhaliwal, chair of Metro Vancouver’s board of directors.

Grouse Regional Park is both one of the newest and busiest of Metro Vancouver’s parks, said Dhaliwal. Metro Vancouver officially took over responsibility for the park in 2017.

There were almost 600,000 visitors to Grouse Mountain Regional Park last year, according to Metro Vancouver, and the popularity of parks is growing at a rate double that of population increase.

Ma added she’d recently done the Grind with both her own mother and father.

The event Thursday also came a day after the federal government announced it is expanding the Canada infrastructure program by over $3 billion to include retrofitting of schools, hospitals and long-term care facilities to deal with COVID-19 as well as to build parks, cycling and walking paths.

Under the new COVID-19 resilience funding stream, projects by provincial governments, municipalities and non-profit organizations will be eligible for federal funding of up to 80 per cent.