It is a momentous day for salmon in British Columbia!

I can tell you with absolute certainty that the federal budget was one of the last things I thought I might be writing about today on our blog.

I can tell you with absolute certainty that the federal budget was one of the last things I thought I might be writing about today on our blog. But an incredibly awesome turn of events that will benefit something that I and so many other British Columbians hold close to our hearts has me bursting with joy and is causing me to share some budget news with you all.

Almost one year ago to the day I gave THIS lecture at Creative Mornings Vancouver. In it I talked about the sportfishing industry in British Columbia and a few examples of how creative they are. I introduced people to the Salmon Stamp, a program introduced in the 1980's wherein the purchase of a stylized stamp is required for sportfishermen in the province to retain salmon that they catch, with the money going back to conservation efforts. It really is a creative way to raise money to ensure the future of what is now the official fish of BC.

Something I didn't realize at the time that I gave my talk was that only $1 of every $6 collected by the federal government under the program was given back to the Pacific Salmon Foundation who runs the program and who heads up salmon conservation projects here. The other $5 went directly into some mystery fund at a federal level, not tagged for any specific use but basically just a pile of excess. Over the past few months our friends at the Foundation (one of them who is on our board of advisors, Dr Brian Riddell) have made it clear to me that their single most important goal for the year was to lobby the federal government to return all $6 from each Salmon Stamp to them so that they can really put it back into conservation.

Today's federal budget announcement marked a momentous occasion as the Federal Budget announced the return of 100% of Salmon Stamp revenues to British Columbia salmon through the PSF! The official statement from the Pacific Salmon Foundation is below. Suffice it to say this is cause for celebration. 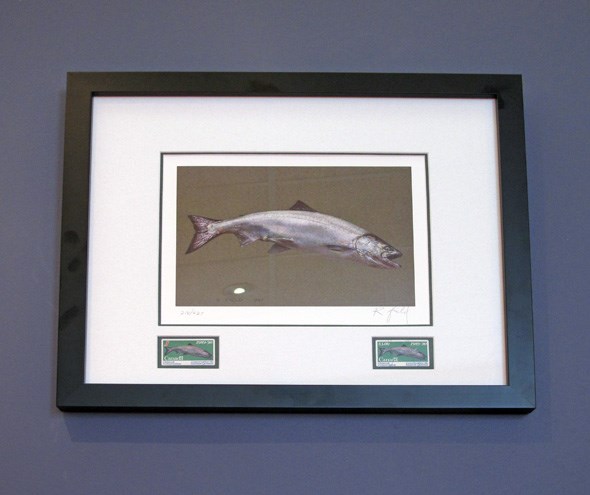 Signed copies and a print of the artwork from the first PSF Salmon Stamp, released in 1989, as they are seen hanging on the wall in the Vancouver Is Awesome office!

Dr. Brian Riddell, president and CEO of the Pacific Salmon Foundation, made the following statement today responding to the release of the 2013 federal budget. When enacted the budget will return 100 per cent of user fees collected from sales of the Recreational Fisheries Conservation Stamp, commonly known as the Salmon Conservation Stamp, be directed to community salmon conservation, restoration and enhancement activities funded by the Pacific Salmon Foundation. Since 1996, the Foundation has received $1.00 from the sale of each $6.00 adult stamp purchased, and 4.00 from each stamp purchased by a juvenile under 16 years of age.

Dr. Riddell said: “I commend the Government of Canada for making sure that each dollar an angler pays for the Salmon Conservation Stamp is returned to B.C. to support Pacific salmon conservation and restoration. This change will result in significant investments in our fisheries that will be looked upon favorably by recreational and commercial fishers, First Nations, coastal communities and conservationists. I am grateful that this proposal received broad support from a range of stakeholders who care about Pacific salmon, including business leaders, recreational and commercial fishing interests, and volunteer streamkeepers. Special thanks is due to MP Andrew Saxton, who championed this proposal, as well as MP Randy Kamp for his leadership as parliamentary secretary for Fisheries and Oceans, as well as Minister James Moore, the senior minister in B.C., who offered leadership on behalf of the proposal within Cabinet. My sincerest thanks to all those involved!”