This Metro Vancouver hiking trail is getting a $7-million expansion 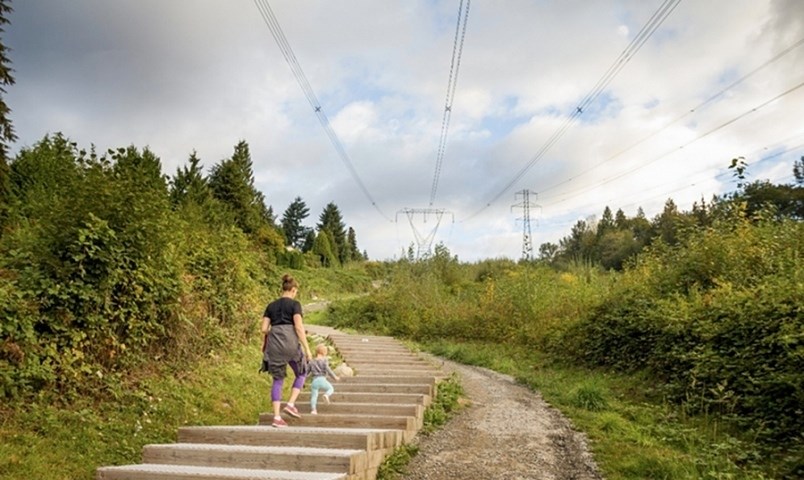 Big changes are coming to the Coquitlam Crunch trail in the next few years.

Council recently approved the concept for the first phase of a five-year, $7-million expansion plan that will see the introduction of exercise equipment, viewing decks and other improvements along the popular trail. Work on a signalized pedestrian crossing at Guildford Way will be finished by the end of the year, while remaining work will be conducted in 2021.

“The Crunch Trail is one of the most popular trail assets in the City of Coquitlam,” parks and recreation staff said in a report to council. “It’s reach extends to all corners of the Lower Mainland primarily attracting users in search of a physical challenge.”

Staff said the Phase 1 improvements will cost $2.8 million of the total budget and focus on the busiest section of the trail between Guildford Way and Lansdowne Drive.

The improvements include fitness equipment for upper body and core strengthening at the top and bottom of the stairs, which the city said will “establish a more complete fitness circuit.”

There will also be three timber viewing decks that will give trail users a chance to take a break while taking in the views of the city, while a new short trail will connect the east and west staircase. A 60-stall parking lot is also expected to be added in the coming year.

The Coquitlam Crunch has become one of the city’s most popular destinations, with up to 52,000 visitors a month. According to user data collected by the city, the trail has seen an uptick in usage during the COVID-19 pandemic, with more than 60,000 trips counted in May.

For more information, go to www.coquitlam.ca/crunch.