New life for a historic creek in East Vancouver

The recent construction of Creekway Park by Hastings Park is just one step of a long-term plan to bring back the historic waterway known as Renfrew Creek or Hastings Creek.
Sarah Primeau
Dec 18, 2013 9:34 AM

The recent construction of Creekway Park by Hastings Park is just one step of a long-term plan to bring back the historic waterway known as Renfrew Creek or Hastings Creek. This project is a great example of Vancouverites trying to revive the rich ecological history of our city’s lost streams, and to reconnect people with nature in the process.

This area, where the creek met the intertidal wetlands of Burrard Inlet, was known to First Nations people as “Kha-nah-moot” or “Haah-ugh-nah-moot,” referring to a traditional story of a couple being “born out of the waters of the stream.” To European settlers, the area became a resort-style destination known as New Brighton, and later, as Hastings Townsite. 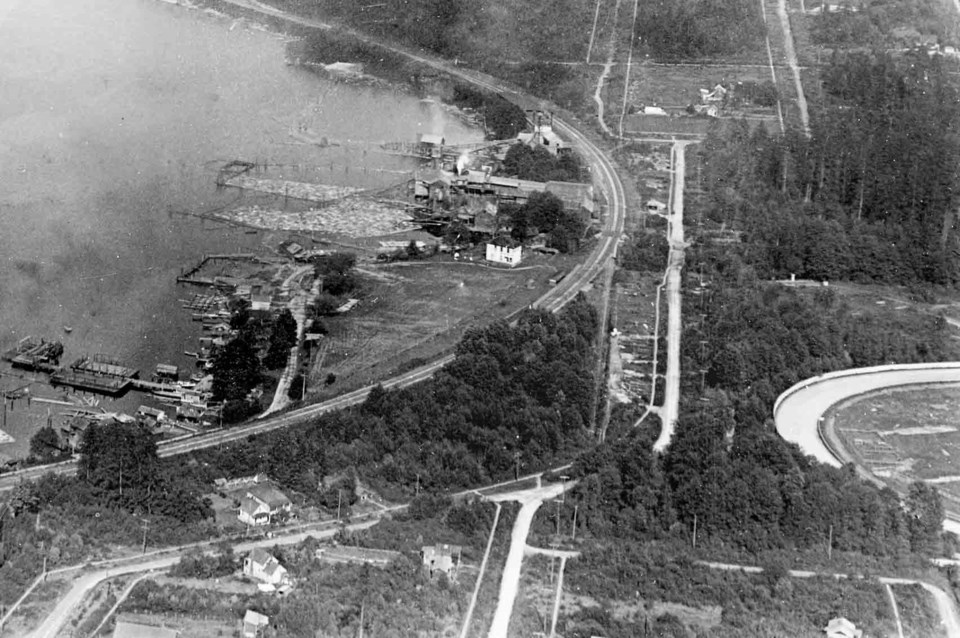 View of New Brighton, looking east, in the early 1900s

Since the park’s founding in 1889 the site has been home to two streams, lush west coast forests, the racetrack, picnic areas, a golf course, exhibition grounds, and amusement rides.  It was also the site of Japanese-Canadian internment camps during a dark period of our country's past. There have been many competing ideas about the park’s purpose over the years, which has led to various plans to chart its future. 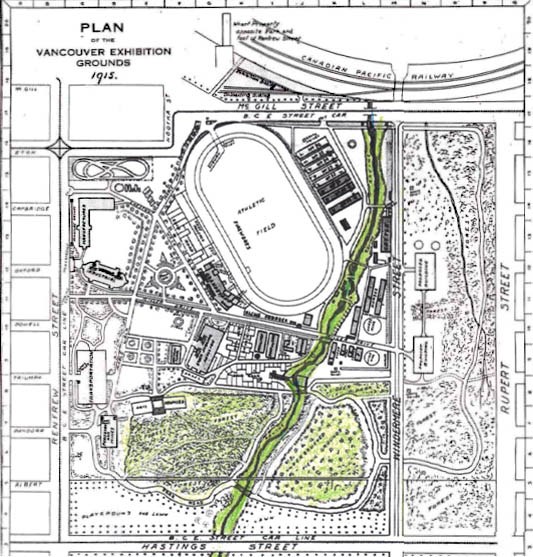 The most recent of these plans is the 2011 Hastings Park / PNE Master Plan, guided by the landscape architecture and planning firm PFS. This plan upheld the idea of re-creating an ecological corridor through the park, connecting the “Sanctuary Pond” (a constructed ecosystem, completed in 1999) to a new salt marsh at the Burrard Inlet via a constructed watercourse and streamside habitat through the park. 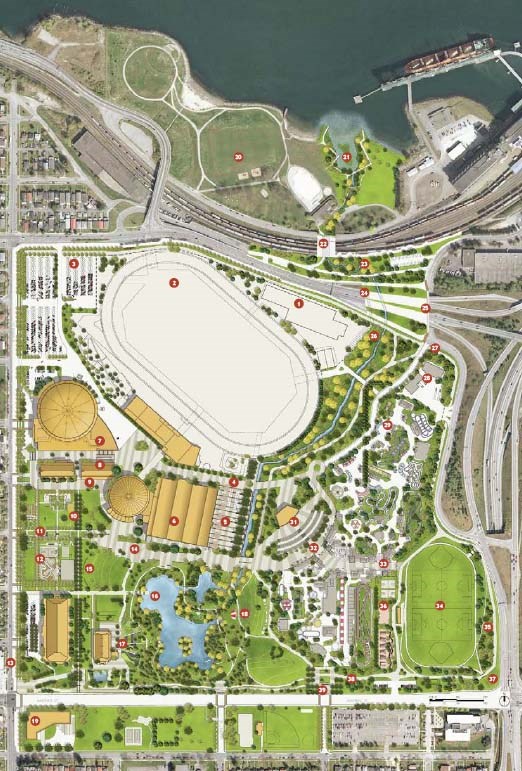 Implementing this element of the Master Plan is scheduled to take place in three phases, the first being the construction of Creekway Park. The Creekway Park site is now a sliver of green tucked between McGill Street and the railway tracks, with walking and biking paths, a stream channel, and a diversity of native plants. The project epitomized several of the challenges of “daylighting” (or re-creating) creeks in an urban area: limited space, existing underground infrastructure, uncertain water supply, and barriers (major roadways, railways) that can limit the movement of water and wildlife.

Despite these challenges the City of Vancouver and the consultant team (HB Lanarc-Golder, Raincoast Applied Ecology, Kerr Wood Leidal) designed the park as a small patch of biodiversity with the goal of supporting birds and insects. It is also intended to improve the connection between Hastings Park and New Brighton Park. The stream in Creekway Park currently receives a small amount of rainwater runoff from the immediate surroundings, but will eventually receive water from a larger catchment area. 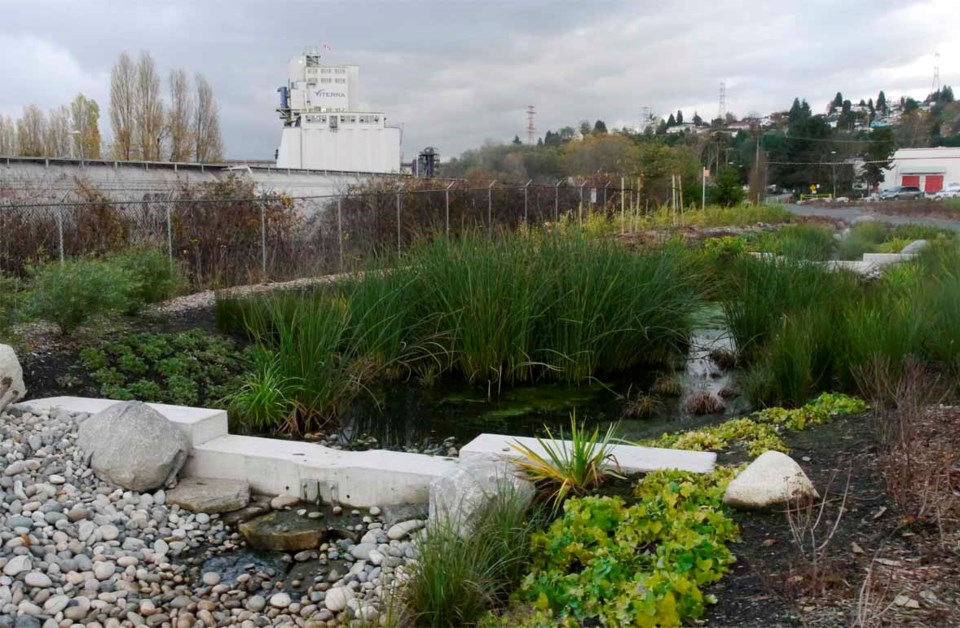 The current limitations of the site meant that designing Creekway Park to support salmon was not possible – at least, not yet. The next step of the plan, however, is to re-create productive intertidal wetlands at the mouth of the stream in New Brighton Park, which will help juvenile salmon, as well as birds and other creatures.

The salt marsh idea has seen various concepts over the years, and recently a student from BCIT, Sarah Nathan, has begun contributing to the vision. Sarah has done water quality testing on stormwater upstream of the site to see how much it will need to be treated before coming into the new wetland. 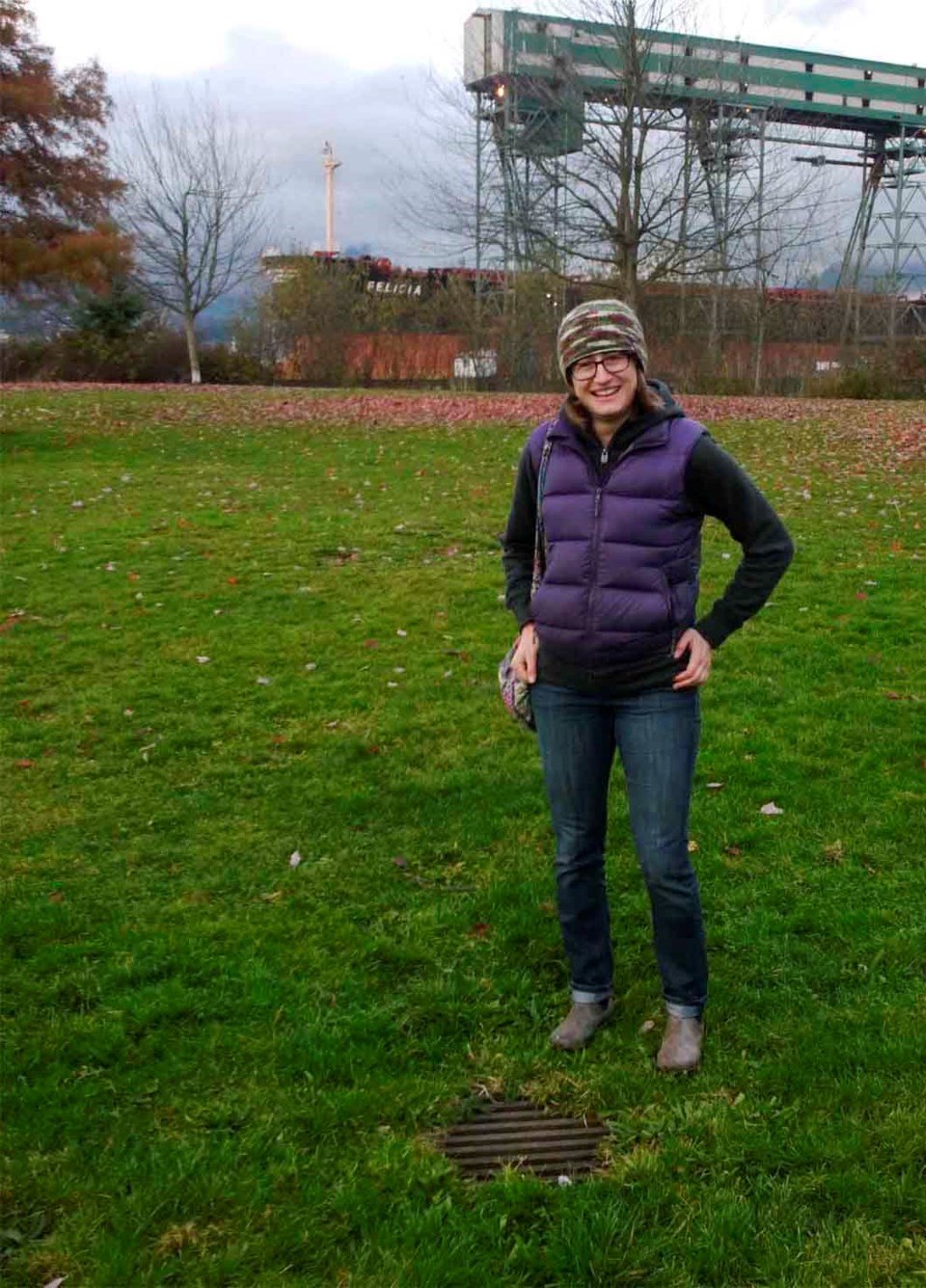 Sarah Nathan, standing next to the underground remains of Renfrew Creek

Eventually, the final link of the creek will be built so that water flows from the Sanctuary pond to New Brighton Park, passing by the racetrack, Creekway Park, and emptying into the New Brighton salt marsh.  As historian Bruce Macdonald pointed out on a recent walk in the area, the creek system is also lost underground south of Hastings St, but perhaps this too can gradually be brought back.

Even if the creek is not currently designed to support salmon, it will still be fascinating to see this plan come to life, and to experience the diversity of birds, insects, and other creatures. As life slowly comes back to the stream, or is born out of the stream, we will have another reason to call this area Khanahmoot once again.

As I mentioned in my last post, I’m happy to be a new contributor to Vancouver Is Awesome, helping connect readers with awesome stories about nature in the city.  You can also find me on twitter at @Nature_City