The B.C. government moved Wednesday to protect 54 of the province’s largest trees in a first step toward a broader old-growth strategy.
Jul 18, 2019 7:36 AM By: Lindsay Kines

The B.C. government moved Wednesday to protect 54 of the province’s largest trees in a first step toward a broader old-growth strategy.

In a change criticized as “inadequate” by the B.C. Green Party, Forests Minister Doug Donaldson said the “exceptionally large and old trees” were selected from 347 on the University of B.C.’s Big Tree Registry. 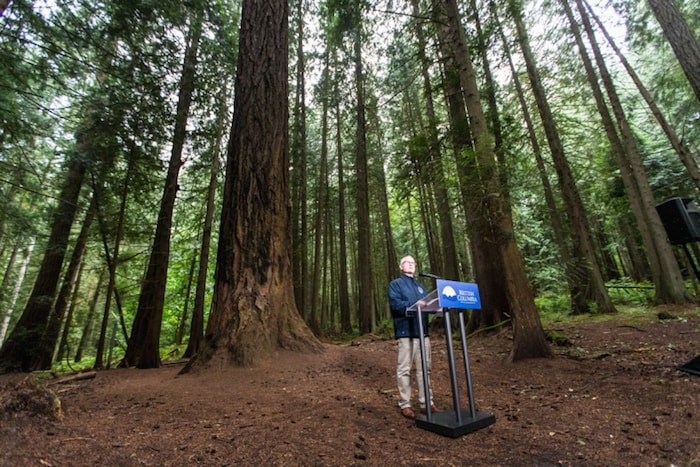 The 54 old-growth giants will be surrounded by groves about the size of a “soccer pitch” to provide additional protection, especially from windstorms, Donaldson said.

“I don’t want to leave the impression that it’s one tree standing in the forest,” he said. “It’s a one-hectare buffer around that tree. So it’s other trees included in that.”

The trees are located in more than two dozen locations, including central B.C., the East Kootenay, Haida Gwaii, Vancouver Island and the Fraser Valley.

More trees could be added as they are identified, said Donaldson, who made the announcement at Francis/King Regional Park, standing in front of an ancient Douglas fir tree that is already protected within the park boundaries.

“British Columbians want to know that trees like this and the ones you’re seeing today — even in an area they might not ever visit — will never be cut down,” he said.

B.C. Green Party MLA Adam Olsen said the decision to protect 54 trees falls far short of what is needed to save endangered old-growth ecosystems, particularly those on Vancouver Island.

“It’s the least possible thing that the government could do when it comes to protecting old growth,” he said. “It’s frustrating and a distraction, I think, from what actually needs to be done.

The Greens have called for a moratorium on logging in Vancouver Island’s old-growth “hot spots,” described as pristine areas of conservation significance, such as the Central Walbran or Schmidt Creek, north of Sayward.

Donaldson said the move to protect big trees marks the start of a “broader conversation” about managing old-growth forests.

He noted that Gary Merkel, a forester and member of the Tahltan Nation, and Al Gorley, former chair of the Forest Practices Board, will hear from British Columbians beginning this fall on how to manage old-growth forests. The two-man panel will deliver its recommendations to the government next spring.

“The recommendations are expected to inform a new approach to old-growth management for British Columbia,” Donaldson said. “It’s always a question of how to strike a balance between protecting old-growth trees and protecting jobs and the economy.”

Andrea Innes, a forest campaigner with the Ancient Forest Alliance, welcomed the appointment of an independent panel. “The NDP have been talking about an old-growth strategy for almost a year now, with very little to show for it,” she said.

“What we need is a much more comprehensive, legislated plan that’s based on science and protects entire endangered old-growth forest ecosystems.”

The government said the 54 trees selected for protection had to meet certain criteria, including being on Crown land outside parks or other protected areas. In addition, each tree was required to meet a minimum size threshold determined by the tree’s diameter.

For Douglas fir, Sitka spruce, western red cedar and yellow cedar, the minimum threshold was set at 50 per cent of the largest tree on record for those species. The minimum for other species was set at 75 per cent.

For example, the largest coastal Douglas fir on record has a diameter at breast height of 4.23 metres. The protection threshold was set at 2.12 metres.