This piranha was hooked by an angler in a B.C. lake 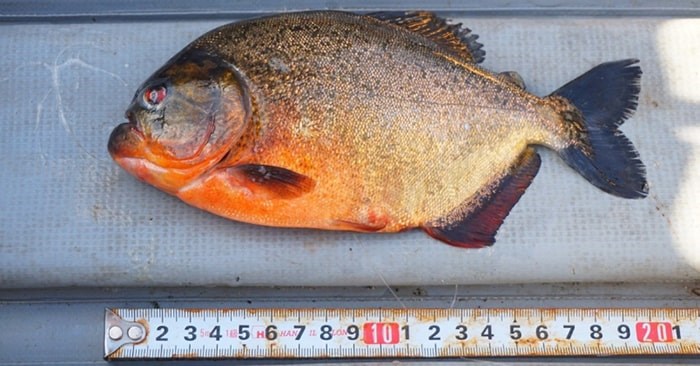 An angler in Nanaimo reeled in a surprise at Westwood Lake this week.Photograph By Conservation Officer Service

The release of invasive species into B.C. waters is a serious offence, the Ministry of Environment and Climate Change said in a statement Friday.

A first-time offender convicted of the illegal movement of an invasive aquatic species can be punished with a fine up to $100,000 and/or a prison sentence of up to 12 months. Penalties double for a second offence.

The Nanaimo piranha, measuring just over 20 centimetres head to tail, was caught in July and submitted to local officials, who identified the creature as a red bellied piranha.

It is believed the fish was most likely released by an aquarium keeper.

The fish is likely to have fed on native fish, bugs and other local species. Any risk to people is low although care should be taken while handling them.

The Environment Ministry said the red bellied piranha has been released into states in the U.S. with warmer climates than B.C. But it has never become established and little is known about any potential effect on the natural environment.

Kasandra Munro, aquatic specialist with Creatures Pet Store in Victoria, said the red bellied piranha is a popular fish with some aquarium keepers.

Munro said she doesn’t consider it an interesting species because its colours are rather dull.

But its fearsome reputation make it popular with some aquarium keepers.

“A lot of people like them because of their aggressive feeding behaviour,” she said. “Some people just like to be able to say: ‘I have piranha’ because they think it’s cool or exotic.”

But what concerns her as an aquarium enthusiast is the likelihood that more people will start releasing them. The government might step in and ban their import and people who have them already might worry about penalties and what to do with the fish.

“People releasing the pets into the environment is not a new thing,” she said. “There’s a lot of bans already on certain species of fish and turtles that used to be available.”