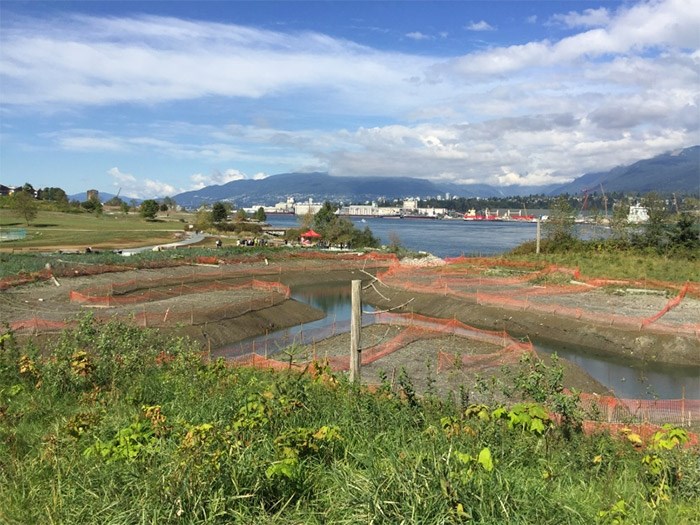 Vancouver Park Board, Vancouver Fraser Port Authority, along with Musqueam, Squamish and Tseil-Waututh First Nations this week celebrated the completion of a new salt marsh at New Brighton Park. The orange fencing was installed to help protect the new plantings and will be removed next year. Photo Jessica Kerr

As the saying goes, build it and they will come.

After a year of construction, the Vancouver Park Board and the Vancouver Fraser Port Authority, along with Musqueam, Squamish and Tseil-Waututh First Nations, Thursday celebrated the completion of a new salt marsh at New Brighton Park in East Vancouver.

And before the project was even fully completed, chum and Chinook salmon fry were seen using the intertidal wetland this past spring.

The intertidal zone at the park was filled in to make industrial land in the 1960s. Project construction included the removal of some of the fill to open up the wetland’s east and west outlets to Burrard Inlet, allowing schools of juvenile salmon to make use of the area as a stopover as they migrate along the shoreline on their way out to sea.

“This project brought industry together with municipal and Aboriginal leaders to act on this significant opportunity to improve coastal wetland habitat on the south shore,” said Cliff Stewart, vice-president of infrastructure with the port authority.

“We were excited to see that, even before the project’s completion, juvenile chum and Chinook salmon were observed using the newly created tidal wetland as a stopover on their way through Burrard Inlet.”

Salt marshes are tidal wetlands that serve as a transition between the ocean and land. They are among the world’s most productive and vulnerable ecosystems. In addition to acting as a refuge for many species of marine animals, they also help prevent coastal erosion, reduce flooding and protect water quality by filtering runoff.

The $3.5-million project is a partnership between the park board and the port authority, in consultation with the three First Nations.

“We realize how much Vancouver residents cherish healthy ecosystems and biodiversity and the park board continues to look for more ways to enhance it,” said board chair Michael Wiebe.

The creation of the salt marsh is also part of the restoration of Hastings Creek through Hastings Park.

One of the other goals of the project was to improve access to nature for park visitors. The construction includes new picnic tables, viewing decks, gravel pathways and interpretive signs. The three First Nations contributed information on their cultural connection to Burrard Inlet.

Squamish First Nation Coun. Chris Lewis shared a bit of that connection with the crowd: “In the long ago, there was two herons that were fishing here and it was so bountiful that they decided to stay here so they transformed into humans and ended up staying in this place where we are right now,” he said. “So I really want to pay testament to that history that it’s your history as well.”

He said the project was all about collaboration.

“I really want to recognize the park board and our neighbouring First Nations and our family Musqueam and Tsleil-Waututh along with the Port of Vancouver for seeing that by working together we can achieve great things, that we can start to revitalize our shorelines to ensure that these places that tell us in our history were very rich and vibrant places are returned to very rich and vibrant places.”