With the opening of the Sooke Hills Wilderness Trail in 2017, it is now possible to hike from Langford to the town of Lake Cowichan over three days.
Times Colonist
Mar 29, 2019 2:17 PM 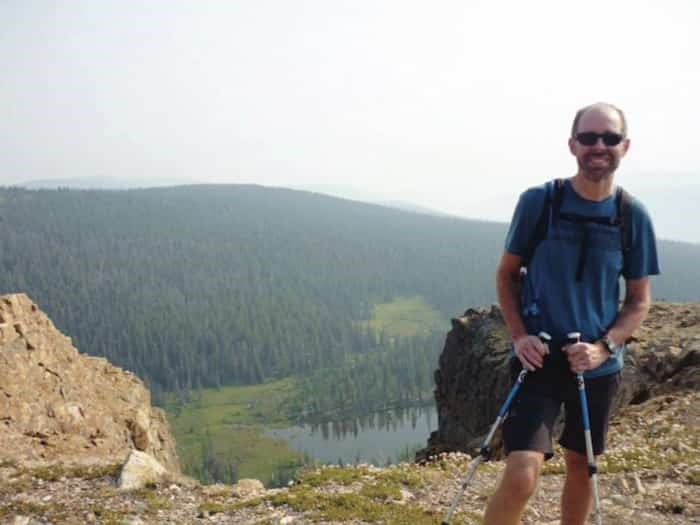 Vancouver Island has some amazing natural features. Surrounded by the ocean, views of neighbouring mountains, bountiful forests, beautiful rivers and falls, and places of wonderful solitude. What it has lacked is a multi-day, inn-to-inn trail that brings this all together in one long-distance hike. Until now.

With the opening of the Sooke Hills Wilderness Trail in the summer of 2017, it is now possible to hike from the Mount Wells parking area in Langford to the town of Lake Cowichan over three days — all on trails — and all without needing a car to get back to Victoria.

The first day, over the Sooke Hills Wilderness Trail with its amazing views from the Malahat, ends at a B&B halfway up the west side of Shawnigan Lake.

The second day, up the Cowichan Valley Trail and over the Kinsol Trestle, ends in Duncan.

The third day, partly along the Cowichan River and with more amazing views, ends in Lake Cowichan. The return from Lake Cowichan to Victoria can be done that same evening or the next morning via a combination of B.C. Transit and the Tofino Bus.

The three legs of the hike range from 25 to 28 kilometres. The first day is the most challenging, with a long and relatively steep ascent, followed by a long stretch of undulating trail.

The second and third days are easier, mostly following old rail tracks (except a few optional but desirable stretches by the Cowichan River on the third day).

Because breakfast and dinner are available at all locations, hikers need only carry the clothes they will need for the three days, some food for lunch and water — so backpack weight is manageable (unlike, say, Cheryl Strayed’s “Monster” from her book Wild).

This hike is certainly challenging and shouldn’t be done without reasonably good conditioning, but the rewards are amazing. The hike winds its way through some of the finest scenery that Vancouver Island has to offer and provides all sorts of time to unwind and enjoy nature.

I did this hike on my own (in late January) and met no more than 10 people on the trail during the entire trip. 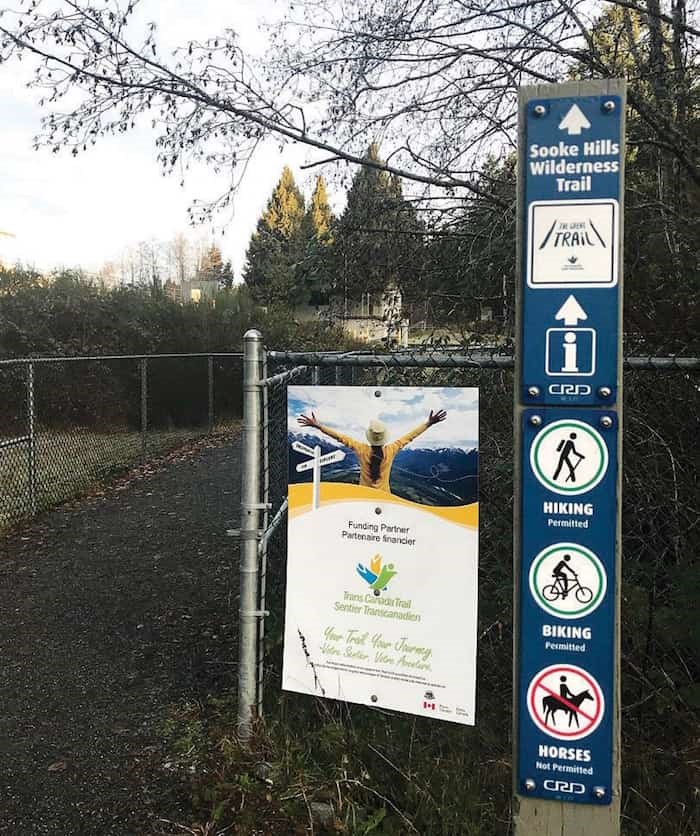 The start of the trail, at the Mount Wells parking lot on Humpback Road in Langford. – Ken Armour

If you seek solitude, then this hike is for you. The only sounds I heard were the wind through the trees, birds and rushing waters. Well, I also heard the sounds of logging at times, but accepted this as one of the reasons that some forest trails even exist.

While long-distance walking is a novelty for many Canadians, it has long been popular in Europe: Miles of established paths criss-cross the continent, and in England, they are often clearly marked and cared for. If a path unravels across a farm, the farmer is the caretaker of that expanse. Many enthusiasts belong to the Long Distance Walkers Association, based in England. Founded in 1972, the association is a clearinghouse for information and organizes long-distance walks.

Long-distance walkers aren’t necessarily campers. Even when they do go on adventurous multi-day excursions, they’re just as likely to spend the night at a bed and breakfast where they can take a shower and have a beer. There are even businesses that will carry your gear for you. Long-distance walkers go solo, but they also go in groups.

The wonderful thing about long-distance walking is that there’s a low barrier of entry. It is not as physically daunting as, say, running a marathon. But it is, of course, hard work. After a number of kilometres, one’s feet can definitely start aching.

Blisters are often the bane of the long-distance walker. Several threads on the association’s forums are devoted to how best to combat, treat and drain blisters. Methods discussed include an absorbing plaster called “Compeed,” duct tape, and immersing sweaty feet in a bag of corn flour. But the bodily toll is worth it!

Studies have shown that long-distance walking can facilitate relief and disengagement from common stresses and problems in life and can help people find ways to resolve their issues. Moreover, long-distance walking can build confidence and a sense of purpose and provide opportunities for reflection. Studies also show that “forest bathing,” a practice that originated in Japan in the late 1980s, increases immunity, decreases the risk of cancer and helps you to recover from illness faster.

Keep all this in mind as you contemplate the hike, day by day.

The hike begins at the Mount Wells parking lot on Humpback Road. B.C. Transit (Route 65 from downtown Victoria) will get you about 1.5 kilometres — a 20-minute walk — from the trailhead. The other alternative is to take a cab. 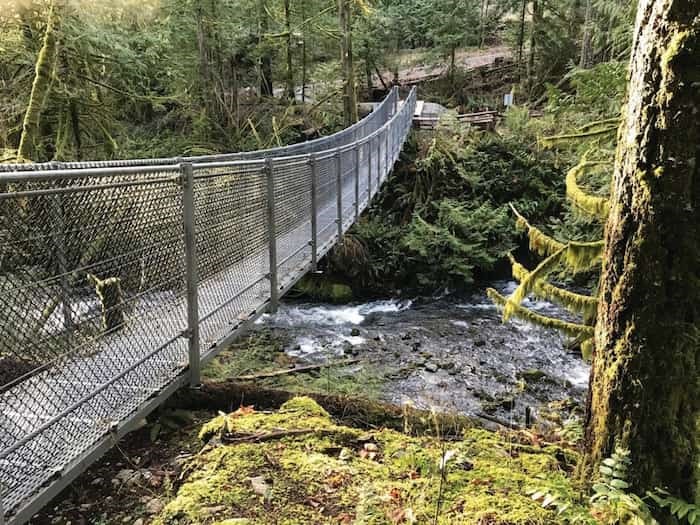 The suspension bridge over the Goldstream River, near the beginning of the hike. – Ken Armour

For the next four kilometres, which are the highest elevations for the trail, there are great views of Mount Baker to the east and the Olympic mountains to the south. The last kilometre of this stretch is a wonderful piece of single-track trail through a forest up to Stebbings Road.

Now you are on the Cowichan Valley Trail, dropping down into a forest, often running by a creek, crossing the lovely little Shawnigan Creek Bridge at the 20-kilometre mark. This stretch ends at Sooke Lake Road at the 22-kilometre mark.

From here, it is a flat six kilometres, with glimpses of Shawnigan Lake to the east, to the night’s destination — the delightful Stonekroft Guest House (just east of the trail, across Shawnigan Lake Road at 2021 Marble Rd.). 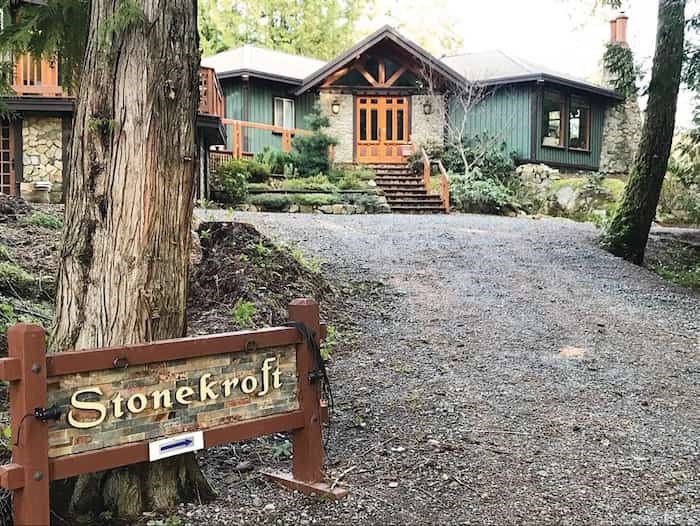 The Stonekroft Guest House, your stop at the end of Day 1. – Ken Armour

In contrast to the first day, the trail on the second day is generally flat, with more wide-open vistas.

About the 21.5-kilometre mark (about four kilometres west of Duncan and 200 metres after crossing Shawnigan Road), there is a small trail branching off the right/east toward Duncan, the night’s destination. This trail ends after about three kilometres at Glenora Road.

From there, it is another one or two kilometres on roads to Duncan, where there are several accommodation options (I stayed at McLay Guest House).

Rather than retracing your steps to the fork in the trail west of Duncan (which makes for a very long day of more than 30 kilometres), take a taxi from Duncan to the Glenora Trails Head Park (which shaves eight kilometres off the day’s hike). From that point, it is about 25 kilometres to Lake Cowichan, including time spent on some of the smaller trails running beside the Cowichan River.

Highlights of the day include the five kilometres of trail by the Cowichan River just past the Holt Creek Trestle (there is a sign for this just past the trestle, where a small trail branches off to the right and initially follows Holt Creek) and the North Side trail that is accessed just past 66 Mile Trestle (on the left-hand side).

The latter trail takes you along spectacular bluff tops high above the river, until the Horseshoe Bend Group Campground, at which point the trail becomes more bucolic and travels alongside the river until reaching Skutz Falls.

From there, the trail is relatively flat and straight, eventually spilling out in Lake Cowichan, where there are several options for accommodation if you want to overnight before heading back to Victoria. 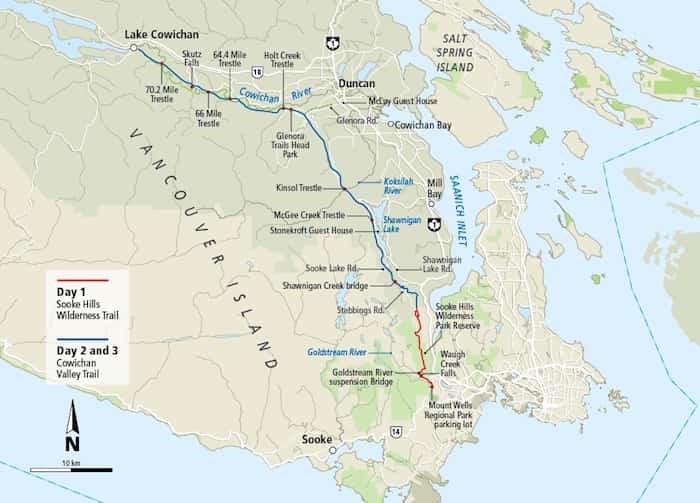 Definitely look at the weather forecast to determine clothing needs. Smartwool tops are great because they can go several days without needing to be washed. Bring a change of clothes to relax in during the evenings.

For food, bring some energy bars for snacks and lunches for Day 1 and Day 2 (lunch for Day 3 can be bought in Duncan).

Depending on the temperature, plan to bring two to three litres of water each day (there are no places to pick up water during the day).

A 25- to 30-litre backpack should be fine to carry clothes, water and food.

Hiking poles aren’t really needed — the trail is not technical except for some mildly technical stretches alongside the Cowichan River.

Following Day 1, the only option is the Stonekroft Guest House, which is just off Shawnigan Lake at 2021 Marble Rd. The hosts, Jude and Tom, are very considerate and make a wonderful breakfast.

Dinner at the end of Day 1 can be obtained from Sarpino’s Pizzeria, which will deliver to Stonekroft and which makes great pizza (there are no restaurants within walking distance of the Stonekroft).

Following Day 2, there are several accommodation options in Duncan. There are places in southwest Duncan that are closer to the trail, but it is still necessary to walk into town for dinner and to buy provisions for lunch on Day 3.

Following Day 3, there is accommodation in Lake Cowichan or the possibility of returning to Victoria by bus.

The Mount Wells parking lot, the start of the trail, can be accessed by taking a cab or by B.C. Transit (the nearest stop, on Route 65, is about 1.5 kilometres from the trailhead).

From Lake Cowichan, the end of the trail, there is a B.C. Transit bus (Route 7) to Duncan.

From Duncan, Tofino Bus travels to downtown Victoria. However, while the Tofino Bus runs that route daily, its only evening runs are on Fridays and Sundays.

If you are arriving in Lake Cowichan on any other day, it is necessary to overnight there and then take the Tofino bus from Duncan the next morning.

With the right clothing and footwear, this hike can be done year-round (except after heavy snowfalls). The trail will generally not get too muddy in the rain (except the branch trails running by the Cowichan River).

Which direction to go

Either direction is possible, but the advantage of south to north is that it will mean not walking into the sun.

This can be shortened to a two-day hike by either ending in Duncan or by doing an out-and-back to Shawnigan Lake. Alternatively, it can be made a four-day hike by hiking back from Lake Cowichan to Duncan.

Alone or with others?

Hiking long-distance trails on your own can provide the opportunity to enjoy the sounds of nature, go at your own pace and better reflect and meditate. On the other hand, hiking with others provides the opportunity to share a wonderful experience and can help the time go by faster.

While the trail is well marked and maps aren’t really required, the following maps are useful:

It is also a good idea to bring a smartphone, which can be used to determine where you are on the trail (though cell coverage is spotty in some areas) and to provide maps of Duncan and Lake Cowichan.

Ken Armour is an avid hiker and has hiked numerous long-distance trails in England and Switzerland, including the Tour du Mont Blanc. This spring, he is planning to hike the Great Glen Way in Scotland and the Northumberland Coast Path in northeastern England. When not hiking on trails, Ken also enjoys trail running and the many trail races in the Victoria region. Ken works at the B.C. Ministry of Jobs, Trade and Technology and is a councillor with the Township of Esquimalt.