Zero Waste Canada encourages people, through participating in events and through education, to not only recycle but to actually reduce consumption. A shoreline cleanup around Burnaby Lake was also conducted on Saturday by volunteers.
Sep 23, 2018 9:24 AM By: Maria Rantanen

The front bumper of a car, a plastic chair, large chunks of Styrofoam, a bicycle wheel, a car tire, cigarette butts, a Tim Hortons plastic cup, roofing tiles and a water-logged double-sized mattress – these were just some of the items found at Thompsons Landing Park in Queensborough on Saturday morning by a group of about 25 volunteers.

Connie Reichelsdorfer, the executive director of Zero Waste Canada and a Burnaby resident, pointed out the small bits of plastic from cigarette packaging and candy wrappers that were littering the ground under the overpass and by the shoreline.

Birds will eat the plastic and they’ll get lodged in their stomachs because they can’t be digested, she said.

“If they have too much plastic (in their stomach), they will die,” she added. They can also choke on it or get caught up in string. The eco-system will get “out of whack,” she added, if too many animals die both in the oceans and on land. 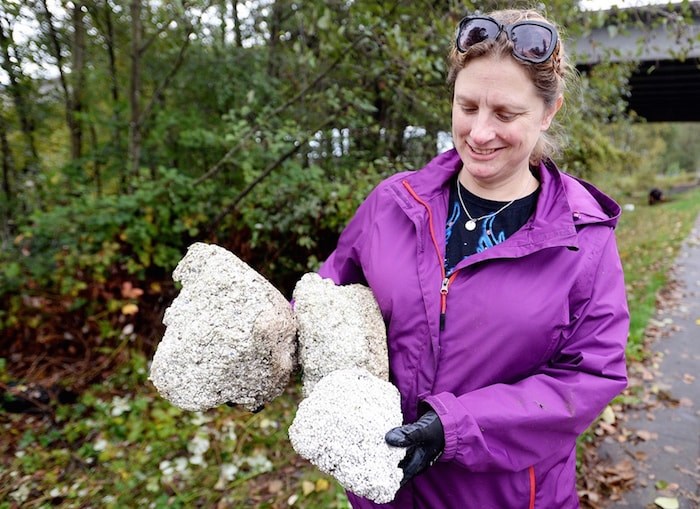 Zero Waste Canada encourages people, through participating in events and through education, to not only recycle but to actually reduce consumption. A shoreline cleanup around Burnaby Lake was also conducted on Saturday by volunteers.

Martin Lowe and his nine-year-old son Max dragged the water-logged mattress to the pile of refuse that was growing on the sidewalk under the highway overpass. The father-son pair had found remnants of a camp with empty food containers, clothing and a blanket.

“It’s kind of sad people are living by the water,” Lowe said. “It makes you realize that people are roughing it.”

With plastic buckets and long-handled garbage pickers, the volunteers picked up small non-organic items that pose a risk to wildlife.

This is the eighth year the shoreline cleanup was organized in Queensborough, and while the numbers were much smaller than a record of 118 a few years ago, the volunteers found plenty of garbage along the shoreline and under the overpass. Several volunteers were also pulling invasive plants, like blackberries and English ivy that were choking out native plants.

Allowing the native plants to grow deep roots stabilizes the riverbank, explained one of the organizers, Karla Olson.

Lisa Egan, who is a member of the Queensborough Special Programs Committee and one of the organizers, found large chunks of Styrofoam that she thought were coming off boats that ply the waters along the New Westminster neighbourhood. The Styrofoam chunks were small round pieces pressed together, but they can crumble and head out into the ocean as the tides go in and out, she pointed out.

“This stuff should be illegal,” she said, showing three large chunks she collected.

This year, in an effort to keep the event zero waste, volunteers were asked to bring their own mugs, and instead of using plastic bags, there were buckets for collected items. There were no disposable latex gloves, rather rubber gloves, and food providers who brought snacks were asked not to bring any single-use items with them.

Miriam Castro came from Langley with her husband to help in the cleanup. She has been in cleanups around the Lower Mainland and on Vancouver Island.

“Everywhere you go you see so much trash – it’s nice to be part of that not just in our community, in Langley, but we try to go to other communities and take part in all the cities in B.C.,” she said.

I really think our society is on a linear path – trash is so easy, it’s easy to put in the garbage and then it’s gone,” she said. “We should have a more circular mindset where we reduce and reuse things and really take care of our planet.”