The four-tower Bentall Centre office complex in downtown Vancouver has been bought by a joint venture led by Blackstone Property Partners (BPP) and Hudson Pacific Properties in what is thought to be the biggest B.C. real estate deal so far in 2019, and perhaps for the year.
Frank O'Brien Mar 28, 2019 6:27 AM

The four-tower Bentall Centre office complex in downtown Vancouver has been bought by a joint venture led by Blackstone Property Partners (BPP) and Hudson Pacific Properties in what is thought to be the biggest B.C. real estate deal so far in 2019, and perhaps for the year.

Blacksone and Hudson Pacific are both based in the United States. 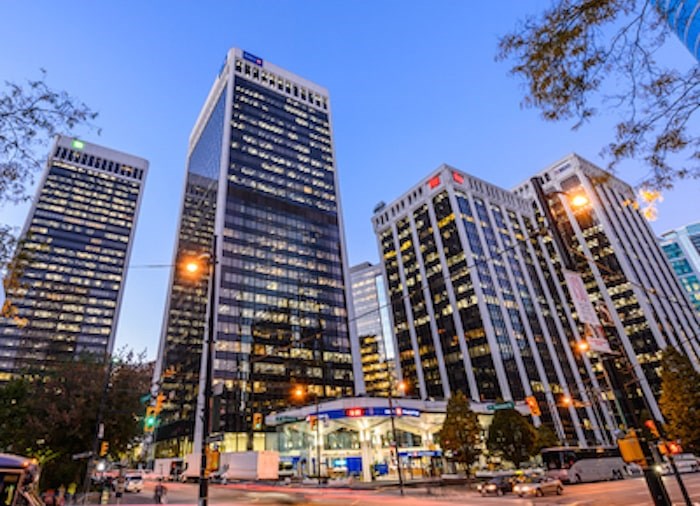 A March 27 release stated that a BPP affiliate will own 80 per cent of the 1.45-million square foot complex, with Hudson Pacific owning 20 per cent.

Hudson Pacific will serve as the operating partner responsible for day-to-day operations and development. Blackstone will act as the managing partner. The transaction is expected to close in the second quarter of this year.

Principles in the transaction declined to release the sale price, citing confidentially. CBRE in Vancouver, which was involved in brokering the deal, also refused comment on financial arrangements.

The portfolio was sold in 2016 to China-based Anbang Insurance Group for $1.06 billion in what is still the largest single real estate deal in Vancouver’s history.

Following the arrest and subsequent14-year prison sentence of Anbang’s founder and chairman in May 2017 on fraud charges, the Chinese government seized its assets, including the Bentall Centre.

The recent transaction is the first foray into Vancouver by Los Angeles-based Hudson Pacific, which owns and operates about 17 million square feet of commercial space across the western U.S.

“We have always viewed Vancouver, with its proximity to Seattle, growing tech and media industries, high quality of life and favorable immigration policies as a natural expansion market for our office and studio portfolios,” said Victor Coleman, chairman and CEO of Hudson Pacific, in a statement, adding the Bentall transaction would provide it immediate scale in Vancouver’s financial core.

Coleman noted the purchase affords the ability to build another office tower, one of the few remaining large-scale office development opportunities in downtown Vancouver.

In an emailed statement, a Hudson spokesman said, “We have by-right entitlements to develop up to a 500,000-square-foot office tower, with the exact scope and design of that project remaining to be determined.”

In addition to fully renovating the retail promenade, the joint venture plans to substantially upgrade the indoor and outdoor common areas at all four towers.

Nadeem Meghji, head of real estate Americas at Blackstone, said in a statement that Blackstone “plans to own and invest in this property for the long term.”

While most expect the transaction price would have been above the $1.06 billion Anbang paid three years ago, observers noted the towers are from 38 to 52 years old, which would affect the capital expenditure needed to bring them up to contemporary standards. BIV has confirmed there were multiple bidders for the property.

“I would be interested in the financial details because it would set a benchmark for Vancouver office properties,” said Kirk Kuester, executive managing director of Colliers International in Vancouver. Kuester said he was confident the property was now in the hands of “sophisticated investors that would ensure its modernization and repositioning.”