In 2018, Burnaby had the largest average deal value ($86.2 million), followed by Tsawwassen, West Vancouver, Langley and North Vancouver.
Business In Vancouver Mar 29, 2019 7:29 AM

Over the past five-year period, the average deal on the top-100 list grew 67.9%; most of that growth occurred over the past year, because in 2015 and 2017, the average value for the top 100 largest real estate deals declined. That erased some of the gains made in previous years. Since the low in 2016 of $30.7 million, the average deal value has grown 113.2%. 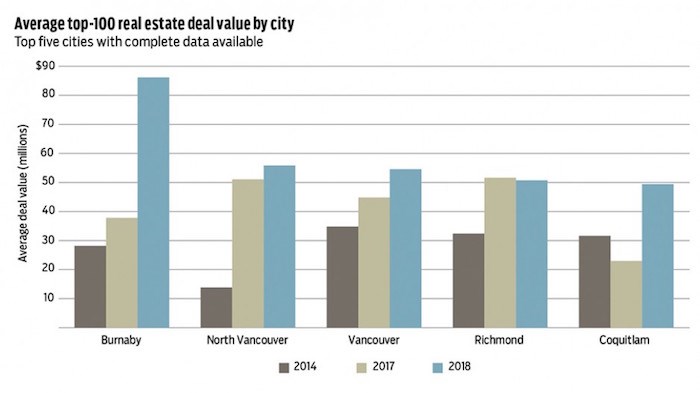 Vancouver is consistently home to the lion’s share of top-100 real estate deals, but for the past two years, it has not broken into the top five cities when it comes to the average deal value.

Vancouver was sixth, with an average deal value of $54.6 million. However, with the exception of North Vancouver and Burnaby, the cities in the top five gained their position as a result of having a single high-value real estate deal in the top-100 list.