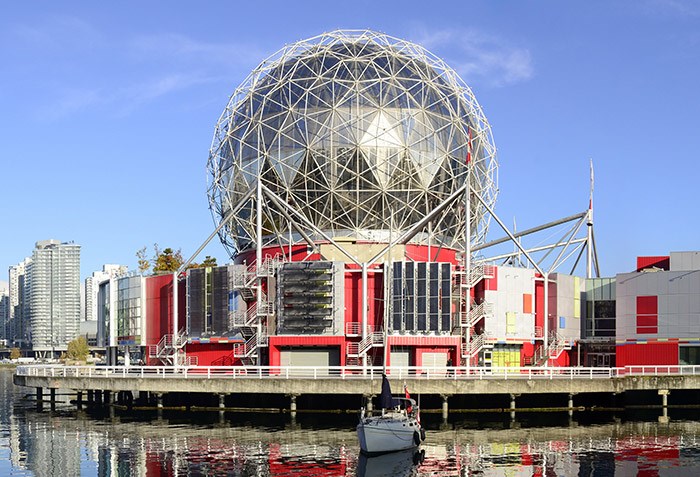 The beloved science centre beat out 31 other selections from across the city, which included everything from the Bloedel Conservatory to Canada Place, the Hobbit House to the Vancouver Art Gallery, and many more; the Marine Building placed second overall.

Alright, after 25,000+ votes, we've reached the final of #VanBuildingBracket to determine Vancouver's Most Iconic Building

Vancouver Public Library got 48% of the vote, but couldn't pull through.

Which leaves us with this. pic.twitter.com/sequ94jk8d

And while there are over 300 geodesic domes across the globe, Science World holds a special place in the hearts of locals and visitors alike - myself included. In fact, I would argue that our shimmering science dome is among the greatest geodesic domes in the world, if not the best.

So, what exactly is a geodesic dome?

According to the Encyclopedia Britannica, a geodesic dome is a, "spherical form in which lightweight triangular or polygonal facets consisting of either skeletal struts or flat planes, largely in tension, replace the arch principle and distribute stresses within the structure itself." The original design for the geodesic dome is credited to American inventor R. Buckminster Fuller in 1954.

Unlike Science World, the Bloedel Conservatory is a triodetic dome, which means that it is a partial dome structure that is similar to a geodesic dome but without being a full sphere.

Of course, there are many aesthetically breathtaking geodesic domes around the world, while others offer fascinating things to discover inside. However, Science World offers a mix of awe-inspiring architecture, a rich historical legacy, plenty of exiting things to see and do, as well as ongoing exhibitions that bring the wonders of the world (and the universe) to the eager minds of Lower Mainland locals - that's hard to beat.

Here are just a few of the reasons why Science World is the most iconic building in Vancouver, and why it might be the greatest geodesic dome in the world.

Science World's original architect was Bruno Freschi, but additions were made by architect Boak Alexander to transform Expo Centre into Science World. It is hard not to see why the shiny structure is known as the "golf ball" - it really looks like one! However, this "golf ball's" stunning appearance makes it the crown jewel of False Creek, as well as a favourite of tourists.

The impressive beaver dam in the Search: Sara Stern Gallery is a re-constructed, real beaver dam from the UBC Malcolm Knapp Research Forest near Maple Ridge.

From Stephen Hawking to Queen Elizabeth to Mikhail Gorbachev, the science centre has welcomed a number of famous guests as well as 18 million visitors and counting.

The Omnimax Theatre, which seats 400 people, was the largest of its kind in the world during Expo 86. Its screen is a massive 27 metres in diameter and soars five storeys high. What’s more, the length of the ramp leading to the Theatre is equal to the length of two football fields. It was also Canada's first Omnimax Theatre.

Lamp in the Omnimax Theatre

Besides being enormous, the Omnimax Theatre also has a 15,000 watt xenon lamp that lights the screen. That lamp is so bright that if you placed it on the surface of the moon and focused it at a spot on Earth, you could actually see its light.

Aside from the Omnimax Theatre and the Science Theatre, there are also  five permanent galleries: Eureka! Gallery; Search: Sara Stern Gallery; the Kidspace Gallery; Our World: BMO Sustainability Gallery; and Puzzles and Illusions.

After a full day of discovery hungry guests can dine on mouthwatering meals at Triple O's White Spot restaurant, which is perfect for kids and grown-ups alike.

Gunther von Hagens’ BODY WORLDS 3: The Anatomical Exhibition of Real Human Bodies may have disturbed some visitors, but it was a truly one-of-a-kind opportunity to experience the incredible structure of the human body in plastinated form. As such, the centre saw a record  830,372 people visit from 2006 - 2007.

On August 21, 2017, Science World partnered with the Royal Astronomical Society of Canada (RASC) to host a viewing party for the "Great American Eclipse" of 2017. Thousands of stargazers attended the epic viewing party.

Located in stunning False Creek, visitors to Science World may also soak in views of the waterfront. The shiny dome is covered with 391 lights as well as 766 triangles which also allow it to reflect the water and further enhance its spherical beauty.

Ever wanted to sleep inside of this captivating landmark? Science World Camp-ins offer an Omnimax film, gallery exploration, a hands-on science activity, a live science show and a chance to sleep among Science World exhibits. Find out more information here.

Want to check out something cool at Science World this month? Science World at the TELUS World of Science will host the Cats & Dogs exhibition, the first large-sale event dedicated to these animals. Find out more information here.