Secrets of Casa Mia and the VHF Heritage Homes Tour

The Vancouver Heritage Foundation 's annual homes tour is one of the best house parties in the city.
Jason Vanderhill Jun 3, 2014 12:40 PM

The Vancouver Heritage Foundation's annual homes tour is one of the best house parties in the city. More precisely, it is a grand celebration of house and home, architect and builder, homeowner and contractor, all who play a key part in the preservation of our local architecture. It is a perfect way to kick off your summer, support the Vancouver Heritage Foundation, and learn more about our house history and ever-changing neighbourhoods.

This year's VHF Heritage Homes Tour was extra special; one of the city's grandest mansions was added to the list. On SW Marine Drive, near the foot of Angus Drive sits Casa Mia, once the family estate of George Conrad Reifel. In the 1920s, George and his brother Harry were both living in the neighbourhood of Angus Drive & King Edward, not far from their father Henry, who was at 1451 Angus Drive, right near the Crescent in Shaughnessy. It was Harry who first built Rio Vista a few doors down at 2170 SW Marine Drive, and Conrad must have loved the view enough to follow his brother and build an even more elaborate home along the Fraser River. For the first time ever, I got to see the home from inside the gates. 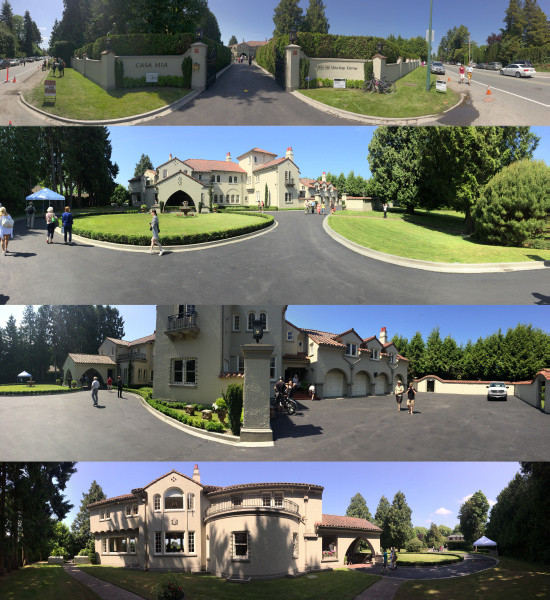 Designed by architect Ross Anthony Lort, the Spanish Colonial Revival style is most appropriate for a man in the brewing and distilling trade. The numerous arched windows, elegantly curved lines, and vaulted ceilings all pay homage, in my mind, to a grand vineyard estate, one that would be perfectly at home in Southern California, or perhaps in a rich fertile valley not far from Valencia.

In the center of the home is a stunning spiral staircase, from which rooms seem to spread out like a fractal in all directions. While photography was not allowed indoors on the tour, many photos already exist online, so for those of you who missed out, you can enjoy some of the sights here or in this video tour by John Atkin. I got to meet a number of the Reifel family members earlier in the week, during the VHF Places that Matter presentation at Sunset Beach Park. Alma Jane Reifel grew up in the house, and she recounted one of her favourite games to play was hide and go seek, undoubtedly one of the best places ever to play the game!

While the upper floors of the estate are classically appointed, the basement is decidedly deco! The ballroom has a sprung dance floor that was constructed by the same crew that built the Commodore. The entire basement is practically a fully functioning club, with separate washrooms, a billiards room, and an attached bar. Alma Jane Reifel also recalled musical guests such as Count Basie (who she knew as Bill), Cab Calloway, and Dizzy Gillespie! They all referred to her as "the Kid", as she would have been around 5 or 6 years old at the time. While there were no celebrity photos lining the walls to show off all the entertainers who have played at Casa Mia, I have taken the liberty to create one! This group shot of the ballroom stage shows a few of the celebrated names who are said to have performed there. I've added Stan Kenton, Cab Calloway, Count Basie, Louis Armstrong, Duke Ellington, and Dizzy Gillespie for one grand snapshot! 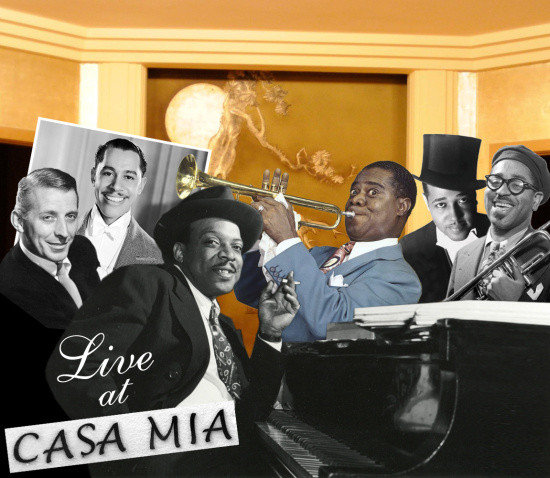 Live at Casa Mia! Musicans who 'may have played' at Casa Mia at one time or another. From left to right: Stan Kenton, Cab Calloway, Count Basie, Louis Armstrong, Duke Ellington, and Dizzy Gillespie. Montage by J. Vanderhill

Much has been written about the Reifel's brewing legacy, but not everyone realizes the family operations also absorbed the BC Distillery in New West, as well as the lesser known Joseph Kennedy Limited liquor producer and distributor and Yaletown. I will be writing much more about this in a forthcoming book…Stay tuned! While the shelves in the basement bar were all bare, I imagined them lined with BC Distillery liquor products!

Below you can see an ad taken from the 1929 magazine annual Scarlet & Gold, a publication geared towards members of the RCMP. The ad celebrates the New Westminster distillery's quarter century of growth, and shows a host of product names long since forgotten: Select Speyside Whisky, Sherriff's Gold Bond Liqueur Whisky, Old Colonel Bourbon Whiskey, Five Scots Select Whisky, Sterling London Dry Gin, Old BC Double Distilled Rye, Royal Canadian Three Star Rye, BC Special Canadian Rye, and Caledonia Whisky Antique Liqueur. The ad boasted it was the oldest, largest, and finest distillery in Western Canada, and at the time it was published, it was under the control of the Reifel family. 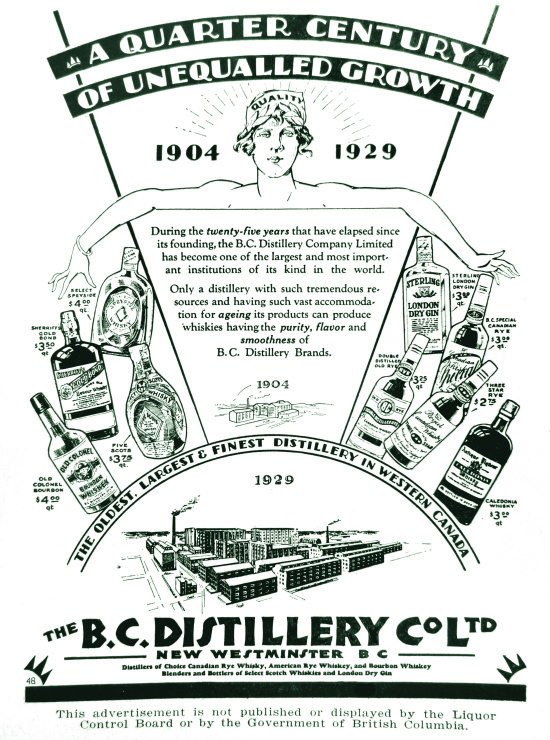 BC Distillery advert, while under the control of the Reifel family, from

There were many more secrets to uncover inside and out at Casa Mia, from the hand painted Disney characters in the children's playroom to walk-in closets the size of some folks apartments! (Oh, ya, and the house became a movie set during the filming of "Fifty Shades of Grey"!) But one very special treat was a chance encounter with the direct descendents of the architect! I ran into three of Ross Lort's grandchildren, and one great grandchild, as seen in the photo below! 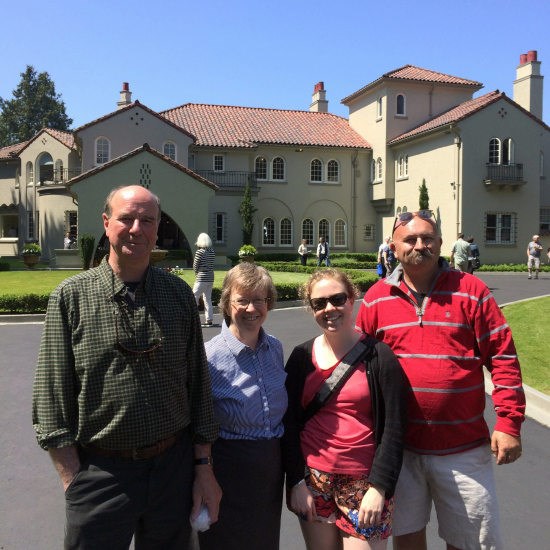 Descendents of Casa Mia architect Ross A. Lort, three grandchildren and one great grandchild went to see their grandfather's handiwork.

After spending my allotted hour at Casa Mia, it was time to continue with the rest of the tour; after all, there were 10 more homes to see! I've created a photoset here showing some of the homes I toured and a few more that I saw along the way.

One great online resource from the Vancouver Heritage Foundation that I would like to feature is a little microsite called vancouverhousestyles.com. It is a matrix of many of the archetypal home styles you can expect to see throughout Vancouver. I'd like to see these drawings turned into a flashcard game, or possibly car bingo! With renewed interest and education, spotting home styles might just overtake birdwatching! There are still more variations and distinctions that could be made here, and I think we can expect to see this resource grow and evolve as styles and influences emerge. 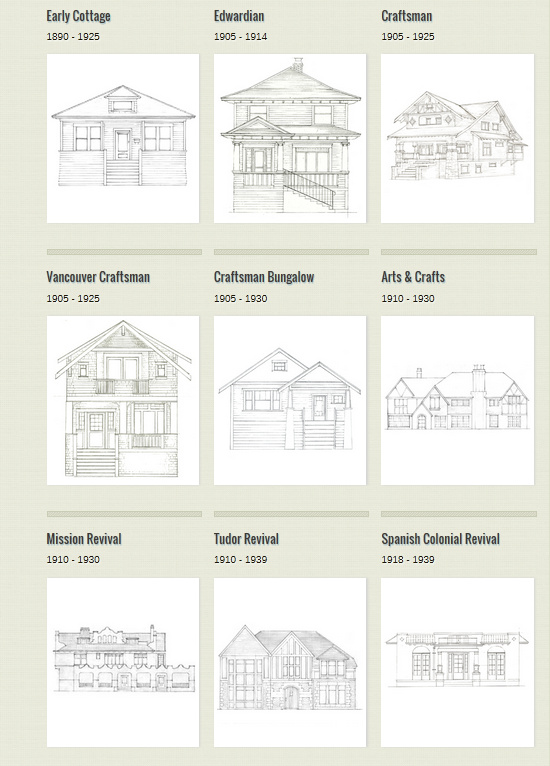 Finally, I'd like to end this post with a beautifully rendered watercolour illustration of the landscaping around the Reifel Estate. Created by Ross A. Lort and assisted by James Bisset, this illustration comes from the conservation plan by Donald Luxton & Associates, via the City of Vancouver website. The future of Casa Mia is yet unknown, but whatever comes to pass, may her glory never fade! Viva Casa Mia! 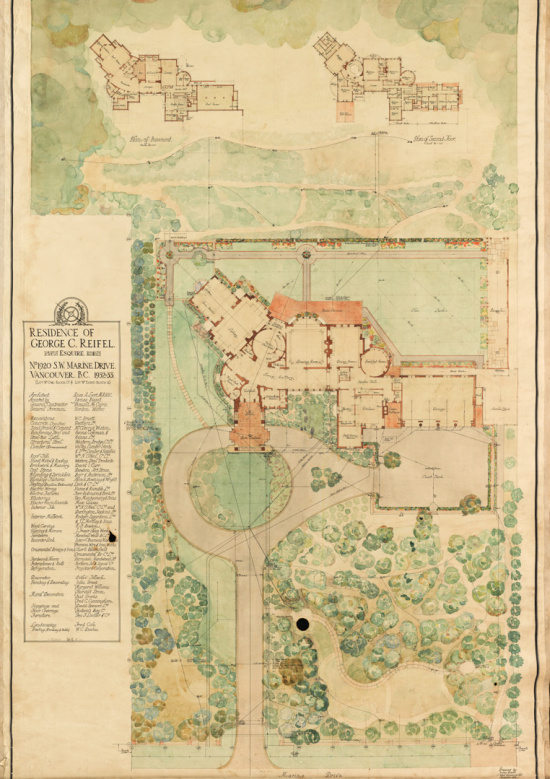 The Casa Mia landscaping plan, dated 1932-1933, by Ross A. Lort, assisted by James Bisset. Illustration from the conservation plan by Donald Luxton & Associates, via the City of Vancouver website.