Beginning next Tuesday, January 29th, at 7:30pm VHF presents "Gritty City - Vancouver in the 60's".  Through three film nights we look back at Vancouver in the mid-20th century when neon and mid-century architecture were at their zenith, and the grittiness of the city was captured on the screen. Partnering with Church at the Hollywood in the historic Hollywood Theatre, our mini-film series offers three nights of great films and great discussion with entry and concession by donation. Doors open at 7pm. See below for more details. Hope you'll join us! 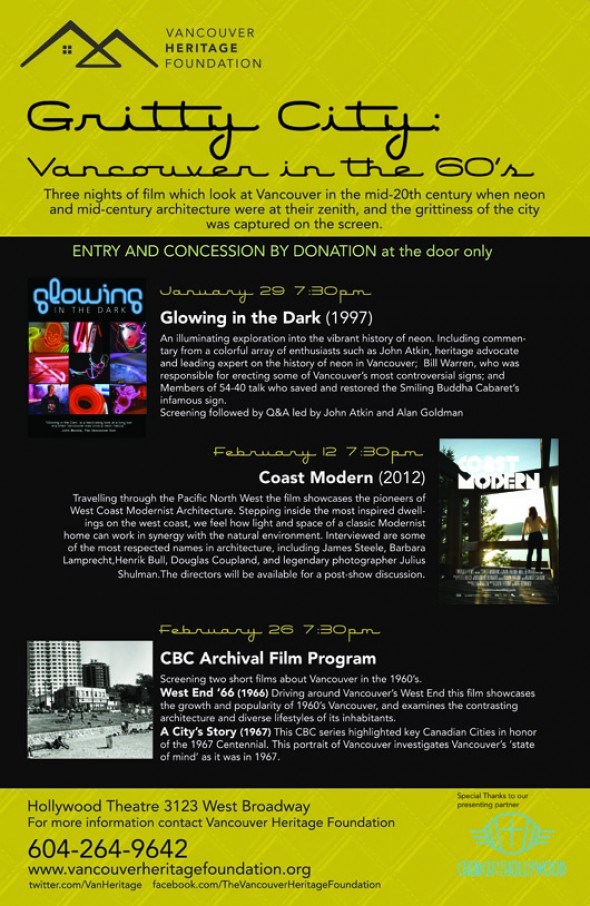 A look at neon in Vancouver, Las Vegas and LA

Showcases the pioneers of West Coast Modernist Architecture, and the homes that have become their legacies. Stepping inside the most inspired dwellings on the west coast, we feel how the light and space of a classic Modernist home can work in collaboration with the natural environment

Screening followed by an open discussion with the directors

Tuesday February 26th - 7:30pm-  CBC Archival Film Program takes a look back at Vancouver in the 60s.     We’ll be showing West End ‘66 and A City’s Story, two half hour shorts that cruise through city neighbourhoods and the downtown by night and day. Screenings with open discussion after each film.