At Your Convenience: 1078 Cardero St.

At Your Convenience is a weekly ode to our indie convenience stores. The ones we frequent everyday and the hidden gems nestled in the heart of each neighbourhood. An old-school throwback in our modern world.
Jason Statler Jul 10, 2013 7:01 AM Jul 14, 2020 8:00 AM

One of the best parts of taking on this series has been the personal stories about people's favourite independent convenience stores. Often it's the owner that makes the experience unique. Here's a great story about growing up in the West End.

"Here's a heads up on a particularly odd 'corner store' here in the West End that you might want to use:

Besides being a visually pretty store to shoot, Cardero Grocery on Cadreo Street between Comox  and Pendrell streets has one other attribute.  Above the store sign you will notice two quotation marks - between these quotations is something that has been painted over.

As a kid in the late 70s and 80s, my friends and I equally bought and stole candy from this grocery store.  The owner,  one Len Lui (real name? no one knows for sure) never EVER smiled.  His lack of enthusiasm may have had something to do with the fact that West End kids in this particular part of the neighbourhood (we were almost all poor immigrants) had little or no money, but an equal appetite for candy as our more moneyed counterparts.

Although I never saw Mr. Lui do this, it has always been understood that Mr. Lui meticulously painted over the words "SERVICE WITH  A SMILE" keeping in line with the Trades Description Act and never deviating away from what can only be described as a promise made to himself and to all the sticky fingered unwashed children that robbed his shop daily.

So get down here and shoot this joint.  Mr. Lui doesn't work there any more BUT if you look up into the back windows of the building, you can see Mr. Lui sitting eating his dinner or petting his cat.  Sometimes I like to believe that i can actually see him smile." 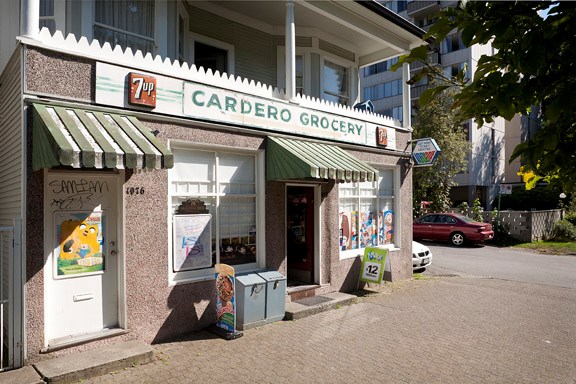