Enjoy Artist Talks and Free Coffee This Week at 'The Wall' 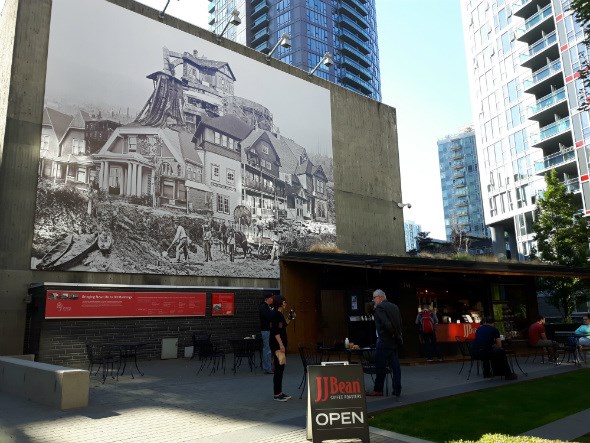 VHF photo of 2017 Excavations by Michael Love, at the CBC WALL, in partnership with JJ Bean and VHF

The weather may be a bit damp, but it's a great week to get out and explore Vancouver's history and heritage through art, great views, and waterfront neighbourhoods. Join us for a free artist talk, an evening of history on Vancouver's own Sherlock Holmes, and a walking tour of Olympic Village with history, nature and some indoor heritage building visits. Join us for a fun week!

Join us to hear from Michael Love about Excavations, his new art piece now installed at The WALL. You’ll hear about Michael’s process in approaching the project’s theme of Vancouver’s built environment and how his time spent with the City of Vancouver Archives informed the final piece. He will also speak about the challenges and successes of creating a work of art for a 40 x 30 outdoor wall. JJ Bean Coffee Roasters has generously agreed to supply free coffee to the first 50 attendees starting at 12 noon.

*The talk is free and open to the public, however we ask you to RSVP by email or phone (604 264 9642) so we can ensure a space for you. The talk will be held on the plaza in front of the artwork, weather permitting. However in the case of rain, we will congregate inside the CBC building in Studio 700.*

Join Author Eve Lazarus for a night of true crime as she draws on stories from her latest book Blood, Sweat, and Fear: The Story of Inspector Vance, Vancouver’s First Forensic Investigator. Starting in 1907 as the City Analyst for the City of Vancouver, John F.C.B. Vance worked in several buildings in downtown Vancouver before being named honorary inspector for the VPD and put in charge of the newly formed Police Bureau of Science (now housing the Vancouver Police Museum). Vance used his cutting-edge skills in serology, toxicology, firearms examination, trace evidence and autopsy to solve some of the most sensational crimes of the twentieth century. His techniques were so effective that there were seven attempts on his life, and for a time, he and his family were under constant police guard.

Walk Ups Welcome- meet outside at the front entrance of Science World.

Since the 2010 Olympics, development in False Creek South has never stopped. From West 2nd to West 6th Avenue, the terrain is now unrecognizable. Condos reign supreme, with the odd precious heritage building now preserved in a transformed community role. We'll find these gems and also pay homage to some of our lost ones along the way. You'll learn about the industry, architecture, public art, and natural habitats of "the Village" and go indoors to see what's brewing in the neighbourhood.