Most Vancouverites could relate in someway to this pumpkin carving...The struggle is real when it comes to searching for a suitable home, whether you’re renting or buying.
0
Nov 4, 2018 8:08 AM By: Elisia Seeber

This pumpkin carving is not like the others. It doesn’t spook you with its glaring eyes or jagged smile.

It’s much more frightening than that.

This year, Deva, 33, and AJ, 31, who asked for their surnames not to be published, decided to create something a little different for the annual office Halloween pumpkin carving contest.

The financial services sector coworkers and fellow team members’ entry was a humorous take on how ridiculous Vancouver’s real estate market is. 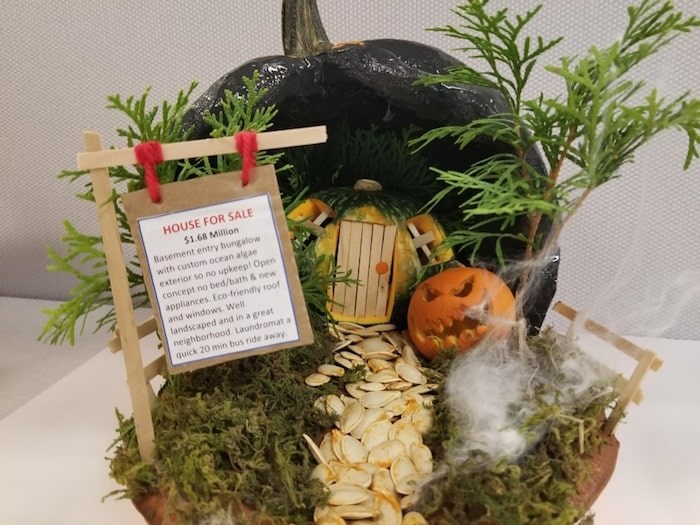 The carving is a little house complete with a front door, windows, pumpkin seed pathway, garden and a for sale sign that reads:

Most Vancouverites could relate in someway to this pumpkin carving...The struggle is real when it comes to searching for a suitable home, whether you’re renting or buying.

Deva, who came up with the idea for the satirical pumpkin, says while the housing market is tough, it has also become a bit of a joke for many Vancouverites.

“We wanted something visually impactful but also funny because everyone likes having a good laugh,” Deva says.

“What better way than to laugh at ourselves? Since we're all in this market together in some way.”

Both own property but stress it’s going to be extremely difficult to sell and find something more suitable for their families.

“Some of our team own and some rent. Personally, I've been a condo owner for 15 years and am looking at selling in the next few years to buy a house with a large yard,” Deva says.

“The biggest challenge is looking at the high selling prices compared to the new stress test rules and finding a suitable neighbourhood that fits in with my commute expectations.

“It means having a more careful selection of properties and very careful budget planning over the next few years for a lot of people, myself included.

“I think a lot of people will have to reconsider the style and size of home they are looking at... Like choosing older and smaller homes, with a longer commute.”

Like many trying to make sense of Vancouver’s housing crisis, Deva says “there’s a lot of pieces to this puzzle and it's not just one thing that needs changing.”

“I think everyone would like to see prices decrease but that's hard to hope for when you have a place you want to sell,” Deva says.

In a similar boat, AJ owns a townhouse in Surrey but is uneasy about his future prospects when it comes to selling and moving elsewhere.

“I have a family with two kids and while our investment in the market has gone up, our chances of using that to move to a bigger home have gone down,” AJ says.

“It's very cost prohibitive to be able to have a family in a reasonable sized house within the commute range of the city.

“I think our pumpkin is a humorous take on how little you get for your money now.”

A picture of their masterpiece has since gathered some traction on Reddit.

And yes, their pumpkin won the office contest.