For some reason one of the common themes on VIA is alleys.  Whether it be the cleanest alley, to all the stuff you might find in the alley: one, two, three, four , five, six, seven, and of course all those cats and critters who live in the alleys.  Alleys are as important and interesting as the streets, and I don't know how anywhere does without them.

The other day I was cleaning out my car, sometimes it gets to the point where it's like a garbage can on wheels.

(warning...you won't get the next five minutes of your life back...) 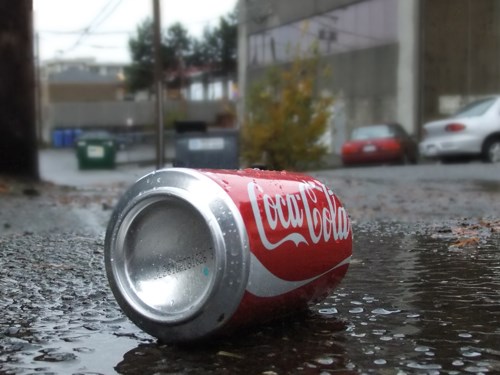 If I had one of those sticks with a nail on it, I would have used it, but instead I was getting down and dirty, pulling everything up by hand, there I was face down.  What makes things worse, is the fact that you can't anymore just toss all your trash...in the trash.  Sue Choy's all over me like white on rice, I got to check each thing, cardboard goes in the yellow bag, newsprint in the blue, it's so confusing.  After she checks it, I'm still at the mercy of the trashman, I don't know why...I long for the approval of the trashman.... maybe it's my high respect for the alleys, maybe it's because they drive giant trucks.  Those weeks where he takes everything, are always good weeks, and when he doesn't take everything....I take it personally.  'What is WRONG with me!??!?!'

The only one I know without question, is cans and bottles, I know where those go.  In the alley.  Give me another couple years and I'll be cheap enough, and motivated enough, to take them back...for now though, I'm only half way there, and by the mere fact that I'm writing about it, you know which half I need to work on still.

I love the sound of the cans is the best, unlike that cd player that I very gingerly placed outside my garage hoping someone would take (I know the trashman doesn't..sniff sniff), with the cans, I chuck 'em...it's like raining pennies...but better.  It was a celebration.  I was not only recycling, I was helping support the local economy, spreading the wealth.  I was giving...and it was costing me nothing.  Beat that.

Every can I threw more recklessly, it was the only satisfaction I got out of the chore, other than the sweet smell of Armor All.  Throwing the cans made go so much quicker, and I was done before I knew it.  As I slammed the car door, I felt a pair of eyes peering at me.  It was my neighbour.

I get along great with my neighbours, they're awesome, which is why my initial reaction was one of embarrassment.  Why?  I was contributing to the local economy!  Sharing the wealth! Well...that's just some kooky counter culture idea I came up with....great blog material, but the truth is...I was freaking littering, and my neighbour was watching, and we're in Vancouver.  Bad...bad... bad....

I didn't know what to say, it was way worse than when I didn't rake for a whole fall and all my leaves went onto their lawn.  Shamefully, I said the only thing I could say to her...literally.....

She grinned.  Yes!  I was off the hook.  At first I thought I thought it was 'ha..ha...I busted you..'.... then without skipping a beat she started picking up the cans.