The west side of Vancouver is still home to the super expensive homes, but perceptions are changing
Jun 7, 2021 1:23 PM By: Brendan Kergin

Current listings of real estate in Vancouver show two trends: the west is expensive but supply on the east side is way behind.

One is most likely common knowledge; the west side is more expensive than the east, and this map shows that in stark contrast. 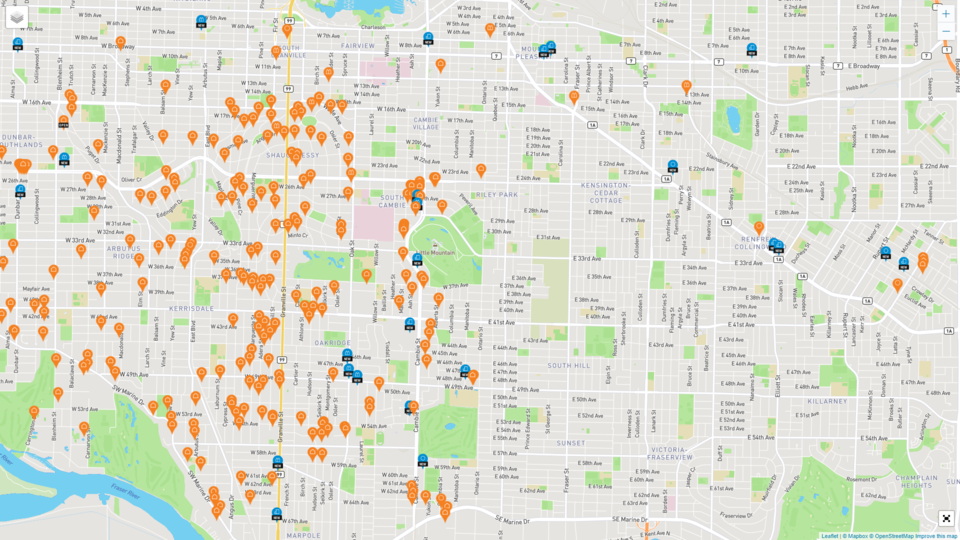 A map of all the homes listed at or above $5 million between Boundary Road and Highbury Road shows a stark contrast in housing prices. By REW.ca

Long-time Vancouver realtor Lorne Goldman chalks this up to a few things, but central is where properties are in relation to Ontario Street. In REW's map only a handful of residences are listed between Boundary and Ontario for over $5 million, while dozens pop up in every neighbourhood in the west.

"The most expensive letter in the alphabet in Vancouver is the letter W," he says.

Because of the perception that the west side of the city was better, people paid a premium on properties that had an address with a W in it. Houses across the road on Ontario Street could vary by thousands, Goldman says, even though they were relatively the same. That's also why the east-west divide is so obvious; it's not based on specific neighbourhoods or distance from downtown as much as it's historically based on which side of a north-south street.

A few factors played into that perception, Goldman says, including parks and schools.

On top of that, current prices are affected by lot size, with lots on the west side (commonly 40 ft. wide) often larger than those on the east side (often 33 feet wide).

He points to Harland Bartholomew, an American city planner who helped plan Vancouver's zoning, which determines a variety of aspects of a property, including what's allowed and what minimum sizes lots should be for different purposes. From 1926 to 1930 he worked in Vancouver. He's also known to have used regulations to create class (and therefore racial) segregation.

Still, Vancouver's west side is where the city's ultra-expensive homes are.

"Of the top ten houses, every single one of them in Vancouver is on the west side," Goldman says.

However, he adds, that's shifted.

"The premium for the west is dropping fast, very fast," he says.

Stats on REW also show that there are nearly twice as many homes for sale in Vancouver's west (more than 2,500) compared to the east (just under 1,300). While each side has a different total number of homes, that's still a big split. Goldman says people's views on what neighbourhoods are desirable have recently shifted.

"In 2021 the perception has changed, the east side is better," he says. "There's no end of buyers that would rather view Main Street to streets on the west side."

While prices haven't reached the highs of the west, east side homes are rising quickly, especially in popular neighbourhoods; Goldman points to a recent sale on East 23 Avenue that hit $4 million.

That's due to proximity to popular neighbourhoods, Goldman says. He points to Main Street and East 20th Avenue as a hot spot, along with Commercial Drive.

"People, I think, would like to be within walking distance of those places," he says, noting that that's become more important as cycling and walking become more common types of transportation again.

Along Main Street he's seeing prices rise pretty much every block as one travels north from Southeast Marine Drive.

"A young person, say age 30, 30 years ago would prefer to be in Kerrisdale as opposed to the Main Street corridor," he points out.

He notes that one generation's neighbourhood of choice is not necessarily the next's and that there are cycles in real estate like other industries. This is just a new shift in the market.