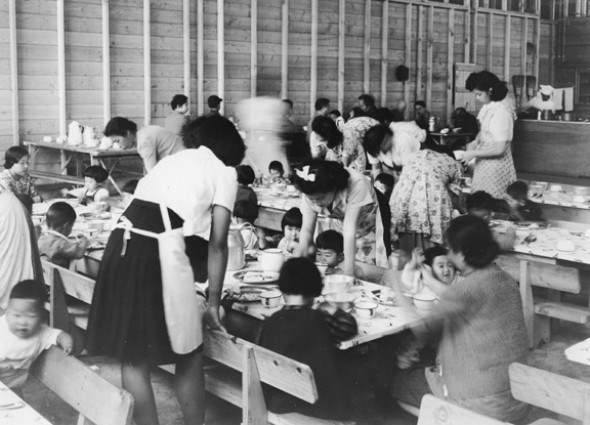 Powell Street, Mayne Island,  Roy Miki, Ucluelet, Saltspring Island, Celtic Cannery, Steveston, Joy Kogawa, Kitsilano, Mt. Pleasant, David Suzuki, Fraser Valley, Victoria,  Paul Kariya. Wondering what this seemingly random list of people and places have in common?  The Canadian Government's War Measures Act in 1942 targeting all residents of Japanese descent (over 20,000), had a profound impact on generations that followed. On the 70th anniversary of the detainment and forced evacuation of these BC residents 100-miles away from the Coast, VHF is honouring the memory of all Japanese Canadians "interned" with a Places That Matter plaque unveiling at the Livestock Building this Saturday, December 1st at 1pm.  The 1989 Parks Canada plaque will also be revealed in its new home at the Momiji Garden. All are welcome to join and learn about the important history of a place more widely known for wholesome family fun; PNE and the Livestock Building.

Meet at 1pm in the Hastings Room (admin bldg north side) 2901 E. Hastings St off gate #2 off Renfrew. Free parking in the vicinity is available for attendees. Listen to detainees tell their stories, and as Vancouverites, let's not forget the injustices of the past (as acknowledge by Canada in 1988), but look to the future to raise awareness about our shared history, and celebrate those who eventually returned to the West Coast and always believed "I Am Canadian". 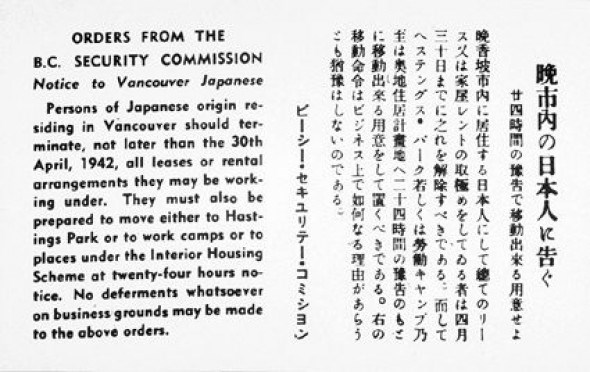 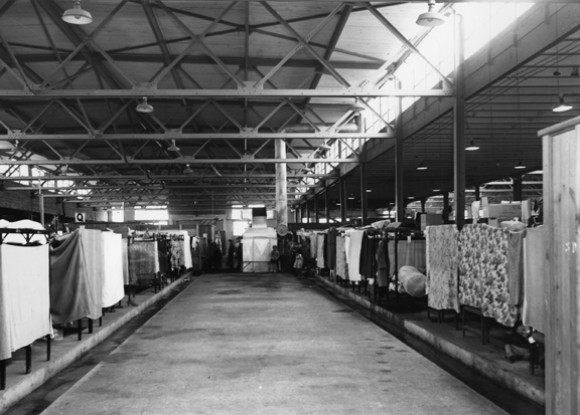 "In 1942, some 20 881 men, women and children of Japanese ancestry, 75% of whom were Canadian citizens, were removed from their homes. More than 8 000 were moved to a temporary detention camp (where women and children were held in a livestock building) at the Pacific National Exhibition Grounds in Vancouver. The detainees were shipped to detention camps in the interior of BC, sugar beet farms in Alberta and Manitoba, road camps in BC and Ontario, or prisoner-of-war camps in Ontario. Between 1943 and 1946, the federal government sold all Japanese-Canadian-owned property - homes, farms, fishing boats, businesses and personal property - and deducted from the proceeds any social assistance received by the owner while confined and unemployed in a detention camp. In 1945, Japanese Canadians were forced to choose between deportation to war-ravaged Japan or dispersal east of the Rocky Mountains. Most chose the latter, moving to Ontario, Québec and the Prairie provinces. In 1946, after the war was over, the government attempted to deport 10 000 Japanese Canadians to Japan but were stopped by a massive public protest from all parts of Canada, supported by the Cooperative Commonwealth Federation. Nevertheless, 4 000 Japanese Canadians, more than half of whom were Canadian citizens, were deported to Japan. On 1 Apr 1949, Japanese Canadians were given the franchise, and legal restrictions used to control the movement of Japanese Canadians were removed. With their freedom re-established, some moved back to British Columbia, but due to the hardships suffered, most Japanese Canadians who were expelled from the coast did not return to BC."  (www.thecanadianencyclopedia.com)