Here’s why the advancement of biofilm science is critical to protecting B.C.’s ecosystem

Scientific knowledge about biofilm, and how it contributes to the western sandpiper’s diet, is crucial to helping us protect the environment while supporting Canada’s increasing activities in trade. 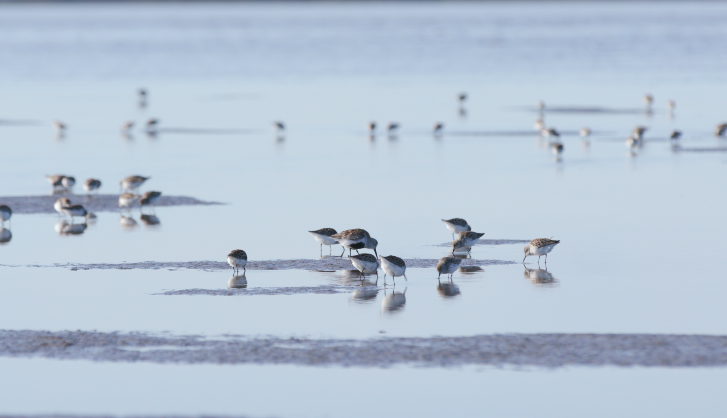 Tens of thousands of western sandpipers flock to Roberts Bank in Delta each spring to rest and refuel on their northward migration from Peru up to Alaska.

During their short visit, the shorebirds eat marine invertebrates like crustaceans, small clams, and biofilm—a thin, dense, and slimy layer of predominantly organic substances that coats most intertidal mudflats, including the Fraser River estuary.

Biofilm is one of the ecosystem components that drives the high productivity of Roberts Bank. Knowledge about biofilm, and how it contributes to the western sandpiper’s diet, is crucial to helping scientists understand and protect the area’s ecosystem particularly as the Vancouver Fraser Port Authority plans to accommodate Canada’s growing trade in containers through the Port of Vancouver.

Under the federal Canada Marine Act, the port authority’s mandate is to ensure the Port of Vancouver is ready for Canada’s trading future, while also protecting the environment and considering the effects of growing trade on local communities. In alignment with this mandate, the port authority began engaging early on with scientists, academics, Indigenous groups, members of the public and technical experts to assess the potential environmental, social, heritage and health effects of a proposed new container terminal in Roberts Bank.

One particular area of focus was western sandpipers and the project’s interaction with their ability to eat during their stop over at Roberts Bank, as the proposed terminal location is adjacent to the biofilm habitat at Roberts Bank.

Dr. Ron Ydenberg, biological sciences professor at Simon Fraser University and Jay Rourke, registered professional biologist, are part of a team that has conducted over 20 studies on biofilm and shorebirds. They have contributed to the development of a wealth of knowledge to better understand how the proposed container terminal project at Roberts Bank could affect the shorebirds.

With this environmental research, the port authority hopes to mitigate the effects of trade-related activities on the environment as required by their federal mandate. They are working alongside the government, Indigenous groups, and other stakeholders to ensure the protection of western sandpipers, biofilm, and other food sources at the Fraser River estuary at Roberts Bank.

The port authority has taken a number of important steps so far, including:

Additionally, Dr. Ydenburg and Mr Rouke, along with their teams of biofilm experts, are developing a biofilm habitat construction manual in collaboration with global leaders in biofilm science. This first-of-its-kind guidance document will explain best practices for creating new biofilm habitat by outlining how to restore, enhance, and establish biofilm in environments where it can support wildlife.

The end goal is to proceed with the RBT2 Project in a way that upholds the Roberts Bank ecosystem while also continuing to facilitate Canada’s growing trade. Although trade is critical to Canada’s economy and quality of life, the port authority is dedicated to achieving trade growth alongside environmental protection.

Go on a journey along the Okanagan’s most extensive trail for an unforgettable B.C. experience
Jul 29, 2021 8:00 AM