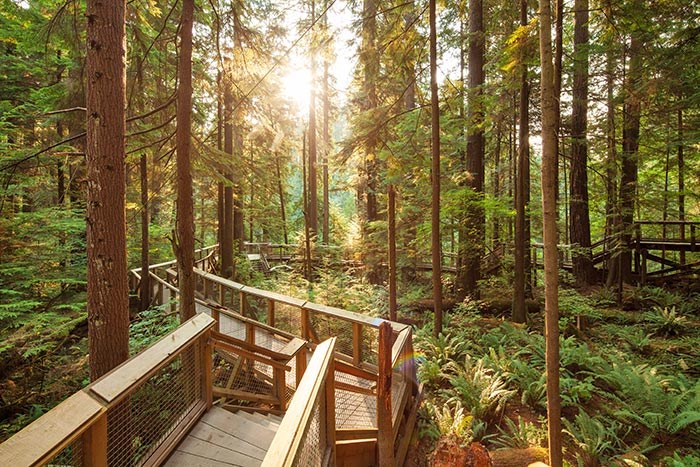 Who says you need a car to have a great weekend day trip? As more and more Vancouverites are opting to save money and protect the environment by taking public transit, savvy travellers are on the lookout for the perfect accessible locales to hike, bike and enjoy the scenery.

For all you pedestrians and cyclists out there, here are 10 transit-friendly adventures in the Greater Vancouver area.

Not for the faint of heart, Capilano Suspension Bridge Park is one of the best known and most beloved attractions in Greater Vancouver. The sights are frankly astounding, and the park is accessible either by transit on the #246 and #247 bus or via the free year-round shuttle service from downtown Vancouver. The park also offers a year-round B.C. residents pass for the cost of a single day’s admission, so if you think you’ll be making a return trip, it’s well worth the investment. If you really want to make the most of those warm summer evenings, come after 5 pm for a 30 percent twilight discount. And once you’re done crossing the bridge and enjoying the views at the park, stop at the Cliff House Restaurant for a beer and a bite.

A seaside oasis just outside of downtown Richmond, day tripping to Steveston feels like going back in time. Hop on the Canada Line from downtown Vancouver to Richmond-Brighouse Station, then transfer to bus #401 or #402 and ride it all the way to the wharf. This historic fishing village offers a glimpse into Vancouver’s maritime history, complete with museums, historic sites and delicious seafood. The area’s Japanese influence also promises some top-notch sushi. Those hoping to relax after hitting a couple attractions can stop at Garry Point Park, or take a leisurely bike ride along the wharf.

This hidden gem in Port Moody is one of the most picturesque and family-friendly beaches in Greater Vancouver. In the summer, soak up the sun and enjoy a dip in clear waters, or hike the surrounding trails at Belcarra Regional Park. From Moody Centre, take the #182 to the park or the #150 straight to the beach.

Just a stone’s throw away from UBC, Pacific Spirit Park is a paradise for hikers, bikers and sightseers alike. The most common route is about a three-hour round trip through the forest, though we recommend checking out a map and planning your route based on your skill and preference. The best route from downtown Vancouver is the #14 to UBC, and it takes about an hour to make it to the park.

Nestled between the Shaughnessy and Oakridge neighbourhoods in South Vancouver, the VanDusen Botanical Garden is a 55-acre garden complete with every variety of flower, plant and tree you can imagine. While a walk through the park is beautiful enough on its own, the gardens also host a variety of events, from plant sales to kids’ summer camps. Walk from King Edward Station or take the #17 from downtown to get there.

Maybe the most popular weekend destination in the entire city, Stanley Park is one of the most beautiful locales in all of Greater Vancouver, featuring beaches, a seawall and an aquarium, as well as lookouts like Prospect Point. It’s easily accessible from anywhere in Vancouver, as buses such as the #19, #241 and #246 will all take you there quickly and efficiently. Biking, walking, sunbathing — what’s not to love?

Yes, the rumours are true — Wreck Beach is a nude beach, or as its website calls it, “clothing optional.” This doesn’t mean you have to sunbathe naked, but when in Rome, right? Either way, Wreck Beach is one of the best spots in Vancouver for a swim or a game of beach volleyball, and it’s accessible via the #4 or #14 from downtown to UBC. It’s about a 20-minute walk from UBC Exchange through the equally beautiful university campus.

One of the North Shore’s lesser-known hiking trails, Mount Fromme is a great choice for amateur and experienced hikers alike. It follows both the St. Georges and Peer Gynt trails and is also friendly to mountain bikers looking for a challenge. Take the #210 from downtown and walk 15 minutes from McNair and Tourney to reach the park.

Past King Edward on Cambie is one of the city’s most beautiful parks, Queen Elizabeth. It’s also the highest point in all of Vancouver, and features one of the most beautiful floral displays this side of the VanDusen. Exotic birds and plants can be spotted at the impressive Bloedel Conservatory, and the outdoor garden is beautifully maintained and offers some stellar views of the city. The park is walking distance from King Edward Station on the Canada Line.

The Richmond Night Market is a great place to sample the city’s many different Asian foods, including spiral potatoes to spicy soups and mango ice cream. The market also features shops with everything from custom t-shirts to iPhone cases. It’s open all the way until October, meaning you have plenty of chances to check it out this summer. The market is a stone’s throw away from the Bridgeport Station on the Canada Line.