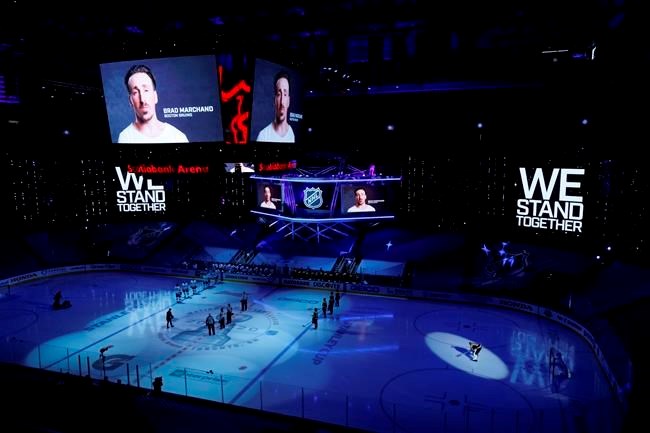 TORONTO — The NHL raised curtain on the restart to its restart with a clear message Saturday.

After players in the NBA kicked off a boycott Wednesday that spread to other sports across North America following the police shooting of Jacob Blake, a Black man, in Wisconsin last weekend, members of the eight NHL teams left in the league's resumption of play elected to postpone four post-season games scheduled for Thursday and Friday.

The organic move driven by the players saw a series of meetings and calls, including conversations with member of the Hockey Diversity Alliance, inside the two bubbles in Toronto and Edmonton where clubs are sequestered as the league looks to complete its pandemic-delayed season.

While not quick enough in the eyes of some — hockey is predominantly white and has been historically glacial when it comes to change — the NHLers have made it clear since Thursday they're invested in highlighting issues like social injustice, systemic racism and police brutality.

In short, they want to help drive change.

"As we resume play today the NHL and our players unite in the fight to end racism," the announcer inside Scotiabank Arena said before the Boston Bruins and Tampa Bay Lightning faced off in Game 4 of their Eastern Conference semifinal Saturday afternoon. "We stand together for a common cause that needs action today, tomorrow and well after our Stanley Cup playoffs end."

The New York Islanders and Philadelphia Flyers were set to follow at 7 p.m. in Toronto, while out West, the Vegas Golden Knights and Vancouver Canucks were scheduled to play at 9:45 p.m. Both those series are tied 1-1.

The Dallas Stars, who hold a 2-1 edge, and Colorado Avalanche resume their matchup Sunday in the Alberta capital.

"The decision to postpone our games and sit out was viewed as an opportunity to highlight a bigger issue than hockey," said Shattenkirk, a native of New Rochelle, N.Y. "We wanted to make sure that every Black player in this league can feel safe and feel like they have a voice. And we want to make sure that we continue this conversation moving forward and make sure that we keep the sport progressing in the right way."

Bergeron, who grew up in a suburb of Quebec City, added it was "amazing to see everyone coming together and realizing that this is bigger than sports."

"It's about human rights, it's about supporting our Black players and being there for them, and realizing there needs to be change," he said. "We want to be a part of that change going forward, so this is just the beginning. Obviously, we know that there needs to be reflection and discussions and conversations, but there also needs to be actions.

"We want to be there for that."

Bruins winger Brad Marchand said the last few days have had an impact on both NHL players and people around the world.

"This is the beginning of a lot of change."

Meanwhile, Flyers head coach Alain Vigneault delivered a prepared statement before his team's game after he was criticized for saying prior to the postponements, "I have really no idea what's going on in the outside world."

"I am guilty of not checking up on what was going on in the world and in the NBA," Vigneault said Saturday. "But I am a good person. I believe in equality. I believe in social justice. I want to be part of the solution. I want to help society in any way I can.

"You know we all have our part to do moving forward to help society fix this issue, maybe we can all start by being good to one another. Society is like a big team. Everyone has a role to play. If we work together and do our roles, I am convinced that we can fix society's issues."

Apart from the player statements prior to Bruins-Lightning, a video was shown on the screen and on television broadcasts in both Canada and the United States.

"In hockey we often let our effort, determination and passion to win do the talking," the narrator said. "But when an issue is bigger than the game we must speak out, starting with three words we need to get comfortable saying: Black. Lives. Matter.

"Equality is the only way forward. As players, as fans and as active citizens we must confront these issues."

The video, which included many of the same elements from what the league produced ahead of the official restart on Aug. 1, also included comments from Knights enforcer Ryan Reaves and Avalanche centre Pierre-Edouard Bellemare, who are both Black, made Thursday after the postponements were announced.

"We must be clear about what we skate for," the narrator continued. "We skate for Black lives. An even in an empty arena we never skate alone.

"Together, we must be part of the movement to end racism because what we skate for today will bring us a better tomorrow."

This report by The Canadian Press was first published Aug. 29, 2020.