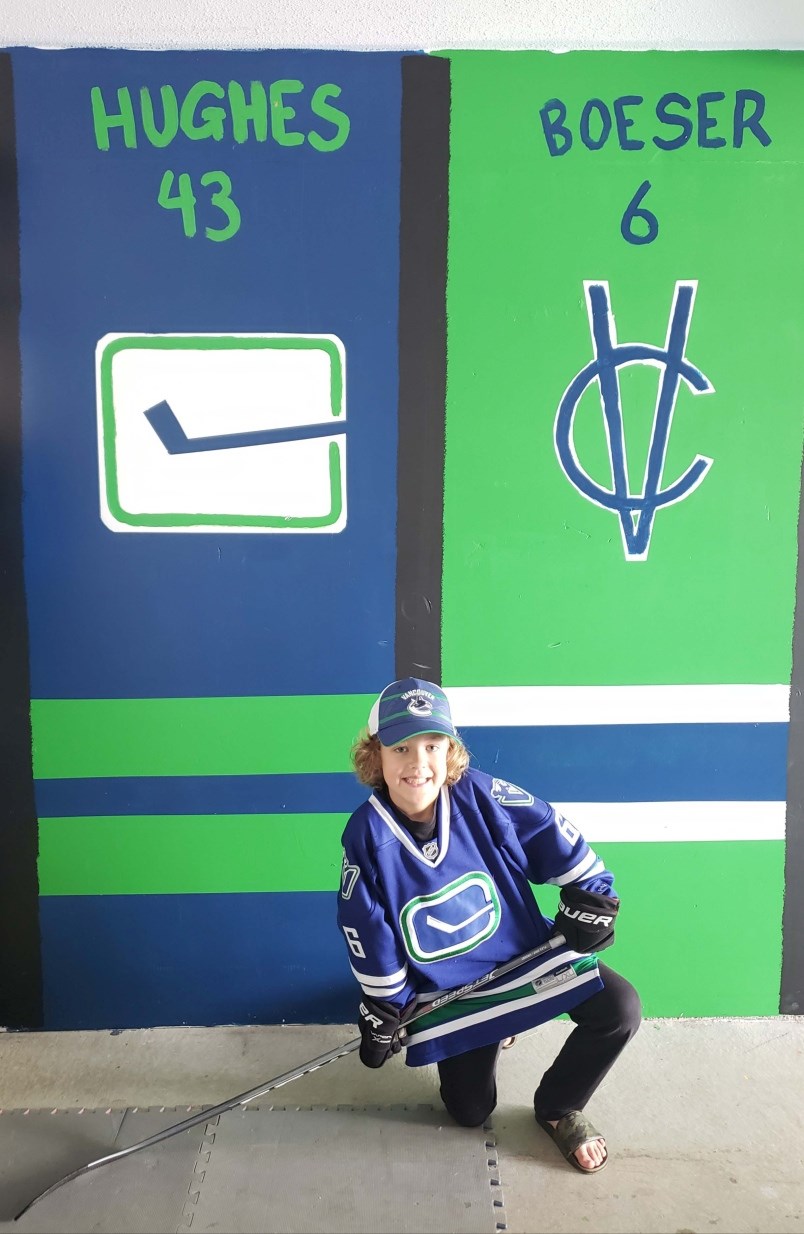 Ryder Starchuk, 8, with his hockey-themed mural in his garage. Photo submitted

Ryder Starchuk will sure be hoping this new school year kicks off the same way the last one ended.

The eight-year-old Ferris elementary student (soon to be nine) is obviously looking forward to seeing more of his friends this time, as opposed to the spring semester when school was almost 100 per cent online due to COVID-19.

But it was the way Ryder finished Grade 3 in spectacular fashion that caught the imagination of his parents, teacher, and even, just last week on Twitter, the Vancouver Canucks.

Meet Ryder, a student at Ferris Elementary School in Richmond, BC. Ryder struggled with the move to online learning, but his passion for the #Canucks helped him adapt. Ryder painted part of his family's garage Canucks colours so he had a project to share with his class! 👏 pic.twitter.com/CNt0XKehiA

Like many students in the spring, Ryder was struggling to get motivated to do schoolwork at home so, after moving into a new home, his dad, Michael, suggested painting the garage with a hockey theme.

“He would participate in the Zoom meetings whenever they happened but still had zero interest in doing what was being sent home,” explained Michael.

“His teacher…offered out a passion project to share what he had been doing at home and suggested a hockey theme.

“We moved into a co-op in April and turned the garage into a little sports training area as we didn’t know when things would go back.

“I mentioned painting his favourite players jerseys on the garage wall. He ran with that, picked the players, then picked out designs and he started painting with Mom and Dad’s guidance.”

When his artwork was complete, Ryder wrote why he liked each player and his parents sent everything to his teacher.

“He spent an hour on Zoom while he was still finishing his project with an EA from his class to show the progress,” added Michael.

“We thought it would be like five minutes, but he was so excited to share and talk with someone.”

Michael said Ryder is “pumped to see some familiar faces” next week but not so excited about the traditional schoolwork on the horizon.

IWTG: Golden Knights put the Canucks on the brink of elimination with third period comeback
Aug 31, 2020 1:54 AM