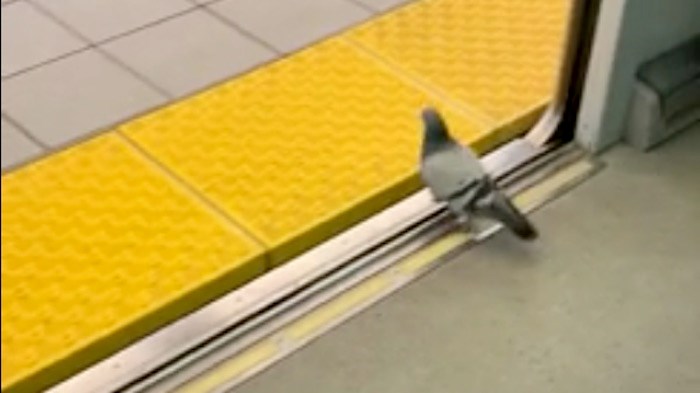 We've heard about how significant an increase in ridership the Canada Line has seen since its launch, so it shouldn't be too surprising to know that even the birds are trying to catch a ride on the train.

A user in the Vancouver subreddit shared a (sadly too-short) video clip of a pigeon trying to go for a ride on the Canada Line, and a passenger shooing the bird off the train.

Pigeon on the Canada Line from r/vancouver

Obviously the bum bird is going to get the boot, mind you - if you don't pay your fare you don't get to ride! That pigeon doesn't even have a Compass card.

"If [pigeons] board in Surrey and they get off downtown, do they know how to fly home?" wondered one Reddit user. In reply, another Redditor mentioned that pigeons are known for their strong homing sense.

Of course, logic serves that if the pigeon took the train one way...they may just as likely take the train back home.

Pigeons seem to flock to the Canada Line. There's always a mass of them on Granville at Georgia outside the entrance to the Vancouver City Centre station (typically feasting on whatever food has been scattered for them), and some individual pigeons seem to stand out for being particularly vigilant.

"There was one [pigeon] at Marine Drive that would wait at the top of the escalator and beg for snacks. He/she would get super excited and would hop up and down, if you stopped and made a move like you were getting some food out," offered one Redditor. Could that have been this one, who had a moment of local social media fame in 2019?

Lyft expands ride-hailing services throughout Metro Vancouver
Jul 10, 2020 12:41 PM
Comments
We welcome your feedback and encourage you to share your thoughts. We ask that you be respectful of others and their points of view, refrain from personal attacks and stay on topic. To learn about our commenting policies and how we moderate, please read our Community Guidelines.