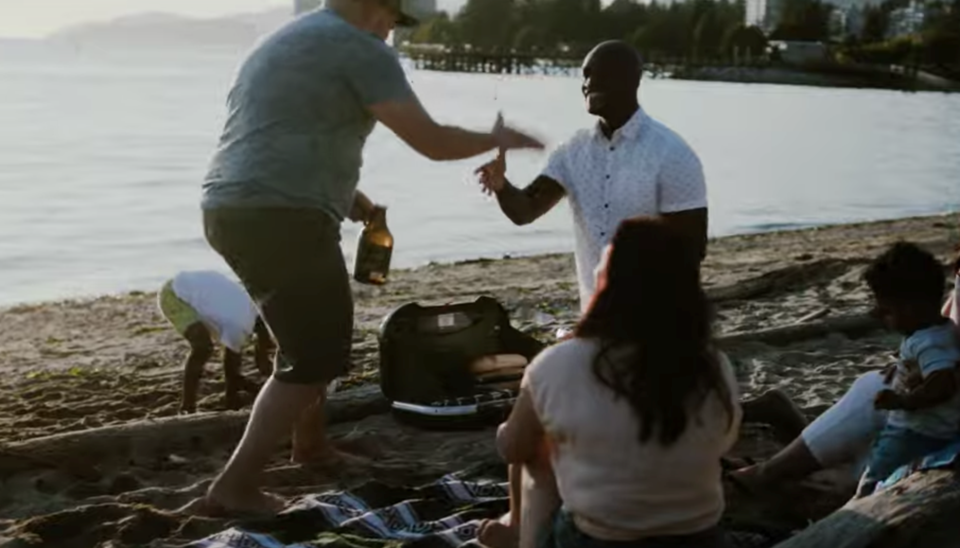 A man holding a growler of beer at Ambleside beach on the North Shore. Screengrab

Vancouver's North Shore is the new name, complete with a logo and some renewed messaging.

“The brand captures more than the breathtaking landscape we are known for,” says Mun Bagri, Acting Executive Director (for Jennifer Belak), VNSTA. “For the visitor, the new brand is designed to create a sense of belonging, fulfillment and a connection to nature, the people and themselves through their time spent on Vancouver’s North Shore.”

Along with the announcement they released a slick video, embedded here, which gives the viewer a look at some activities on offer.

Swimming, mountain biking, skiing, hiking, stand up paddle boarding, and simply hanging out with friends are all featured.

Things get super awesome at the two and a half minute mark when a man can be seen leaving a craft brewery with a growler of beer in hand. He arrives at a barbecue some friends are having at Ambleside beach and receives a high five.

It doesn't show the man consuming it but it's implied that this beach is a great place to bring two litres of fresh, tasty beer to enjoy with friends.

While it's seeimgly at odds with the Municipal Alcohol Policy of the District of West Vancouver and the alcohol policy of the park itself, I personally welcome the invitation to drink on this beach and will be making my way there posthaste.

Let's just hope the West Vancouver PD don't crack down on it the way the Vancouver PD do on Habitat Island (aka Beer Island) near the Olympic Village.

Vancouver cyclists conquer mystical mountains of Iceland (PHOTOS)
Feb 22, 2020 3:06 PM
Comments
We welcome your feedback and encourage you to share your thoughts on this story. We ask that you be respectful of others and their points of view, refrain from personal attacks and stay on topic. To learn about our commenting policies and how we moderate, please read our Community Guidelines.