A visit to this remote Sunshine Coast village is an ode to beautiful B.C.

Lund is at the very northern tip of the Sunshine Coast, is a two ferry trip, and has the distinction of being mile zero of Canada’s Highway 101.
0
Oct 5, 2019 6:27 PM By: Sandra Thomas

“Where exactly is Lund?”

That was a question I asked recently while planning a cruise of Desolation Sound with Pacific Coastal Cruises and noted our itinerary included one night in Lund on the Sunshine Coast.

The harbour as seen from the shade of an arbutus tree at Lund Resort at Klah ah men. Photo Sandra Thomas

But, to be clear, when I say “Sunshine Coast,” I’m not referring to the short ferry ride from Horseshoe Bay to Gibsons Landing or Roberts Creek. Lund is at the very northern tip of the Sunshine Coast, is a two ferry trip, and has the distinction of being mile zero of Canada’s Highway 101.

Lund also has the distinction of being one of the most picturesque oceanfront villages I’ve ever had the pleasure to visit and could very well be the poster child for the tagline “Beautiful British Columbia.” 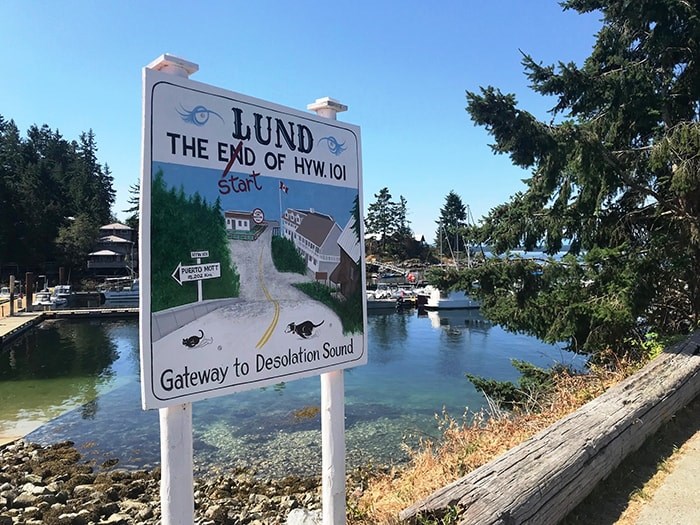 Once we arrived in Lund I immediately regretted never having been before and also felt conflicted about writing about it, because now that I’ve discovered this hidden gem, I kind of want to keep it under the radar. But, then I decided it’s just too charming not to share.

The Lund Resort at Klah ah men is home to 31 newly renovated rooms inspired by Tla’amin art and culture and from the moment we checked in, I could sense the history and tradition of this historic property. 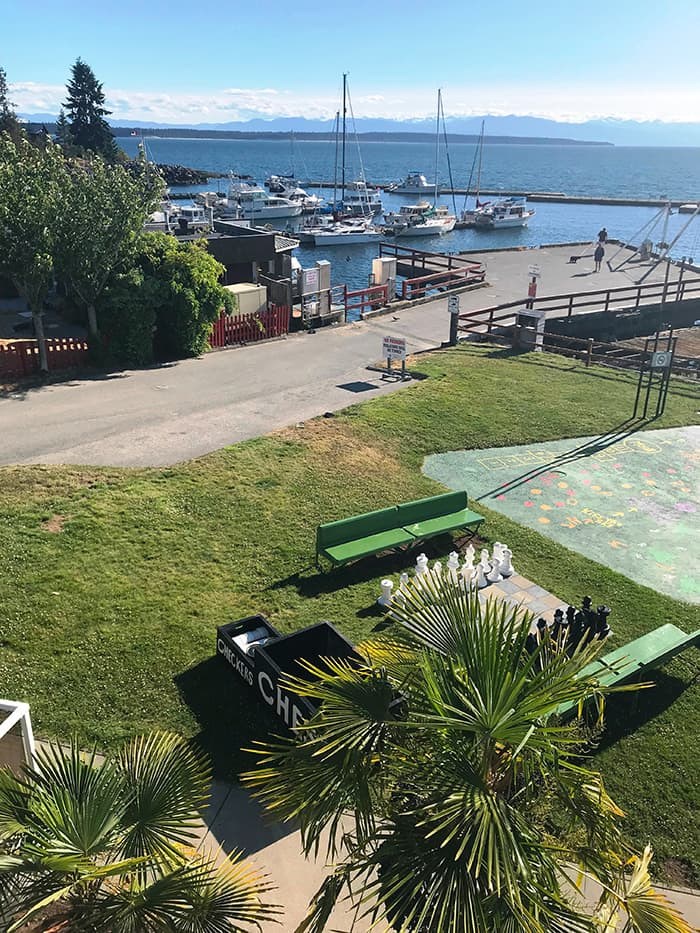 The view from our room at Lund Resort at Klah ah men. Photo Sandra Thomas

Formerly known as the Historic Lund Hotel and Marina, the resort was built in 1905 and is located in the village of Lund, which was once known as Klah ah men. The resort features 31 newly renovated guest rooms, all completely reimagined, and most have decks or access to a deck with unobscured ocean views. 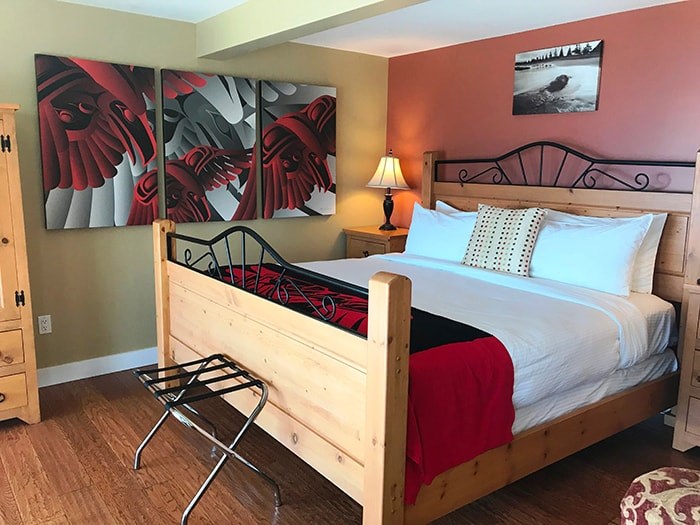 The newly renovated guestroom we stayed in at the Lund Resort at Klah ah men. Photo Sandra Thomas

Our room overlooked the Salish Sea and the boardwalks of 13 Moons Marina and we spent hours relaxing on our large balcony just taking in the views. A gallery at the back of the resort sells local and indigenous art, which is also visible across the entire resort.

The Sweet Shack and 13 Moons Coffee can fill the need for snacks and caffeine, while the Stock Pile is the place you’ll find food, a deli, beer, wine, spirits and fishing gear. Take-out food and meal delivery is also now available from the Stock Pile for locals, yachters and Savary Island visitors.

We were lucky enough to visit the recently renovate Back Eatery, formerly the “restaurant and pub,” during spot prawn season and executive chef Linton Novak did these delicate morsels proud.

To describe the menu as “seasonal and local” is to simplify just what it is chef Novak does with the bounty from the earth and sea he’s surrounded by — and certainly doesn’t do justice to the ever-changing menu.

Many of the ingredients are foraged or caught locally and cooked using a mix of modern and traditional recipes of the Coast Salish Klah ah men people. 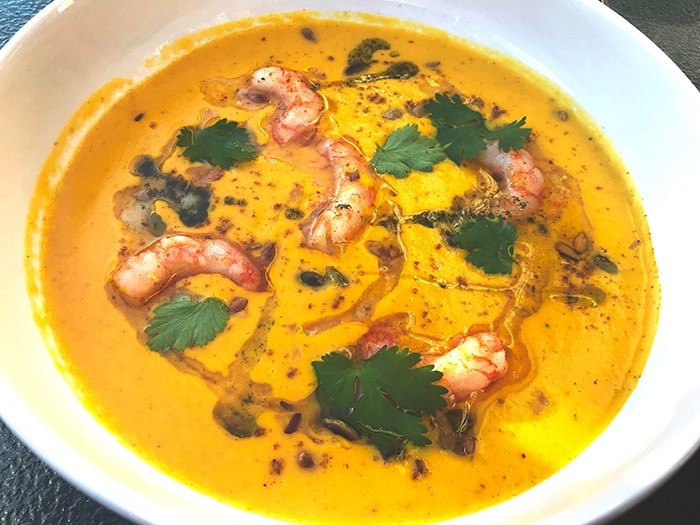 If you can schedule your visit to Back Eatery at Lund Resort at Klah ah men during spot prawn season, just do it. Photo Sandra Thomas

During our visit, my husband enjoyed a seafood bowl brimming with fresh fish, mussels, clams and prawns, while I had to try the Midtown dry stout short ribs with mashed potatoes and charred Brussels sprouts. A decadent sticky toffee pudding topped off our sumptious meal. 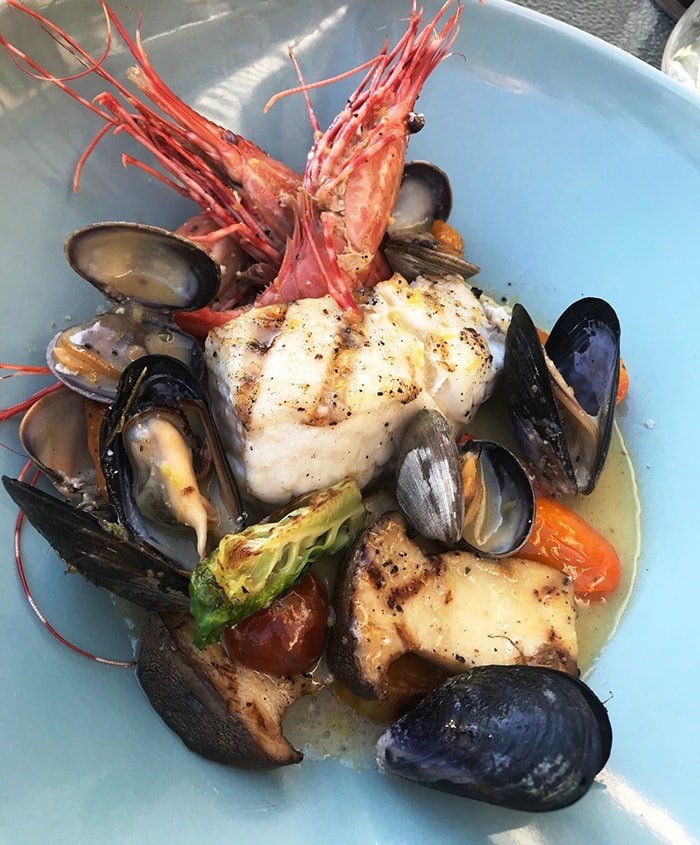 A seafood bowl from Back Eatery. Photo Sandra Thomas

We also relaxed at Back Eatery over brunch the next day and, as a result, can happily recommend the banana bread French toast with caramelized banana, rum caramel, maple syrup and brown butter ice cream — it was so worth the carbs.

The newly expanded patio meant we were able to enjoy the view beyond 13 Moons Marina at both morning and night. 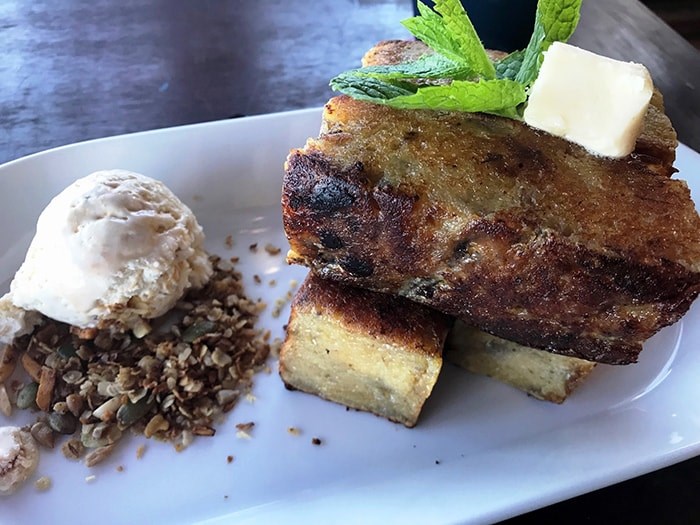 Klah ah men translates to “a place of refuge,” the name given to the village by the Coast Salish people more than 4,000 years ago. It’s here they used the sheltered harbour to interact with others and to hunt, gather food and travel along the Salish Sea.

The village was not only significantly important as a cultural hub, but also for practical, everyday life and for story-telling and sharing the traditions of the Coast Salish people.

Lund is known as the gateway to Desolation Sound, famous for its stunning natural beauty and set against the backdrop of the Salish Sea, so it makes sense the Lund Resort at Klah ah men offers several boat cruises at 13 Moons Marina, located just steps away from the resort. 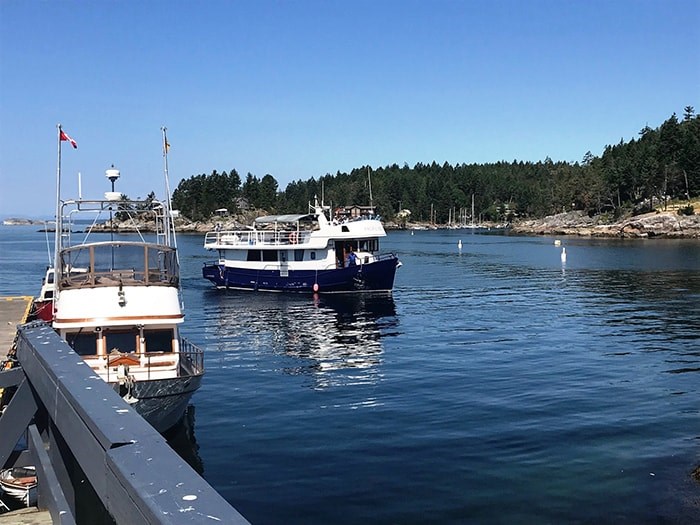 A selection of two-hour cruises means you can watch the sunset as you sail past Savary Island, Hernando Island and Saltery Bay, watch for dolphins, whales, seals and sea lions and trap shrimp and crabs along the way. Local guides are also available for a number of marine excursions, including kayaking tours to witness 6,000-year-old petroglyphs.

If you’re a local, the idea of spending a day and taking two B.C. Ferries to get from Lund to Vancouver and back again for business or an appointment might seem laborious. But as a visitor, even just from Vancouver, our trip over and back was all part of the adventure and the scenery rivalled anything I’ve been lucky enough to witness in other parts of the world.

Lund is located 12-lkilometres north of Powell River on Highway 101 and we travelled from the Horseshoe Bay ferry terminal to Langdale near Gibsons Landing — reservations are accepted on this route. We then drove the highway to Earls Cove and crossed to Saltery Bay — reservations are not available for the Earls Cove-Saltery Bay crossing.

From Vancouver Island you can leave from the Little River Terminal near Comox/Coutenay — reservations are accepted on this route. Note: the fare for the ferry between Horseshoe Bay and Langdale includes your return trip and the trip from Earls Cove to Saltery Bay is also free, but you have to pay for the return trip.