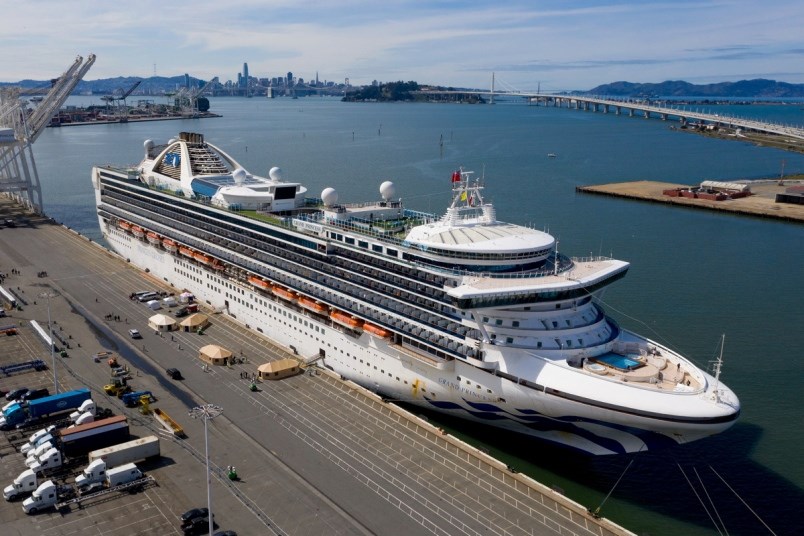 Tents stand on a wharf near the Grand Princess in Oakland, California, on Monday. The cruise ship, which had maintained a holding pattern off the coast for days, was carrying multiple people who tested positive for COVID-19. Noah Berger, The Associated Press March 9, 2020

B.C.’s public health officer says the cruise-ship season should be put on hold as the COVID-19 virus moves around the globe, causing outbreaks on cruise ships.

“It is my belief that we should be delaying our cruise season until we are in a safer place internationally,” Dr. Bonnie Henry said in a teleconference on Monday.

While Henry acknowledged the move would affect businesses in Vancouver and Vancouver, and the tourist industry, she said her primary concern is the health and safety of people in B.C.

“I have grave concerns about cruises right now.”

Ports in Victoria and Vancouver are preparing for hundreds of cruise-ship visits starting in early April, with close to two million passengers and crew set to arrive.

Henry said the fate of the cruise-ship season is “absolutely being discussed” by federal and provincial health officials and Transport Canada’s Border Services Agency.

The federal government will make a decision about whether to curtail cruise-ship arrivals in Canada after receiving advice from provincial health officials, said Henry, noting a federal decision could come as early as next week.

“Cruise ships have passengers from around the world who may be arriving from areas with known or unknown spread of the novel coronavirus,” she said.

The U.S. State Department is also warning its citizens — particularly those with underlying health conditions — to avoid travel by cruise ship.

Ian Robertson, chief executive of the Greater Victoria Harbour Authority, said while cancellation of the season would be a “significant economic blow” to the community, “I understand people’s concerns and quite frankly, the health of the public is primary.”

In the meantime, the harbour authority is waiting for direction from health authorities and Transport Canada on what protocols might be required. Western Stevedoring, which manages the cruise-ship terminal at Ogden Point for the Harbour Authority, will be stepping up cleaning of hard surfaces and adding hand sanitizers, Robertson said.

Uncertainty about the season comes after a $6.8-million infrastructure project wraps up at Ogden Point to accommodate vessels of about 1,148 feet. Victoria is expecting about 290 cruise ship visits this season, with about 770,000 passengers.

The first cruise ship of the season, scheduled to arrive in Victoria on April 3, is the Grand Princess, which arrived at the Port of Oakland on Monday after 21 passengers were infected with COVID-19. Canadians on board are being taken to quarantine in Ontario.

As the plight of the Grand Princess plays out in the media, Victoria resident Sandra Guerreiro is waiting to learn if two planned Disney cruises will proceed. “It’s kind of stressful. I have stopped all planning right now,” she said Monday. Guerreiro had arranged a 10-day cruise starting May 8 in Hawaii and ending in Vancouver, and a second northern European cruise in July.

Disney has offered her credits for later cruises, but she’d rather travel on the dates she already has, as the cruises were planned to celebrate a son’s graduation and in conjunction with other families.

However, Guerreiro is willing to do what she has to. “Vacationing is a luxury, it is not a right and we have to be sensible and decide what’s best, not just for ourselves but for everybody else in the world and follow what the directives are.”

Jeff Bray, executive director of the Downtown Victoria Business Association, said if the season is scuttled, “it would have an impact but it wouldn’t be as significant as other regions or other cities in North America,” because other parts of the economy are strong.

Local businesses would be affected, because they have already ordered inventory in anticipation of the season. They may also reduce the number of summer staff they had planned to hire, Bray said.

B.C. to start doing roadside checks to ensure people are staying in their communities
Apr 19, 2021 2:43 PM